Back To The Psych Ward: A Journalist And His Wife Deal With His Severe PTSD

As usual, my wife Mary spotted the warning signs, knew what they meant and knew what needed to be done.... 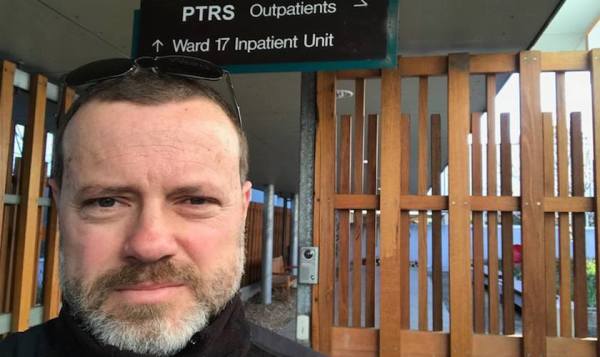 As usual, my wife Mary spotted the warning signs, knew what they meant and knew what needed to be done.

My nightmares had suddenly returned after a long period without any. I’ve been waking up with bags under my eyes. Most afternoons I’ve needed to have a sleep, I’ve been that tired. My anxiety levels have shot up. Barely a day goes by without me taking Valium. I’m jumping out of my skin at any unexpected noise and feeling tense inside supermarkets or cafés. I’m depressed. I’ve also started drinking alcohol again, sometimes before midday. As I noted in a recent post, I got a new tattoo on my arm partly because I wanted to feel the pain of the needle.

Ward 17 is a psychiatric unit run by Austin Health in Melbourne. I was first admitted there for five weeks in August 2016 and then for another three weeks in July last year. During my previous admissions, I’ve met Australian veterans, male and female police officers, paramedics and prison guards as well as civilians who were in the wrong place at the wrong time.

I was re-admitted this morning.

All my admissions have followed Mary's intervention.

That's one of the key points I want to make here — listen to your loved ones, friends or work colleagues if they notice you're not traveling well. In my case, I denied for years there was anything wrong even though signs of PTSD first started appearing in 2009, the year after I left Baghdad for the last time. In 2015, Mary begged me to see someone. I finally relented and saw a psychologist but put on such a mask that I fooled him into thinking there was little wrong with me.

Finally, again, at Mary’s insistence, I saw a highly qualified psychiatrist on March 8, 2016, who took less than 45 minutes to diagnose me with PTSD.

The prospect of going to a psychiatric ward will unnerve most people. I was terrified when I entered Ward 17 the first time. As I walked toward the ward last year for my second admission, I shook my head in disbelief. I couldn’t believe I needed to go back. I was convinced one admission would be enough. Turns out my treating team was not surprised to see me again.

This time around? I was counting the days till I got here.

Each time I’ve learned much about my PTSD as well as the moral injury I felt over the deaths of Reuters photographer Namir Noor-Eldeen and driver Saeed Chmagh in Baghdad in July 2007 when I was the Iraq bureau chief.

That’s another point I want to make. It's not a sign of weakness to need help with mental health issues. I've emerged stronger from each of my previous admissions to Ward 17. I'm sure the same will happen this time around.

You share experiences in a psych ward. You quickly realize you’re not alone. Other patients have similar symptoms. A bond develops. I’ve also been a member of a closed Facebook group for Ward 17 patients since my first admission. It’s a marvelous social support.

Finally, it’s really helped to be able to speak openly with my manager and HR folks at Reuters about my PTSD and treatment. They have my best interests at heart and are working with me to make sure I take the time I need to get better. That makes me feel comfortable about returning to a suitable level of work when I’m ready. I’m passionate about my role as head of mental health and wellbeing strategy at Reuters. Having an agreed return-to-work plan in place gives me confidence that I’ll do the best job I can.

P.S. I don’t want anyone feeling sorry for me. Instead, I want you to think about your own mental health. How are you traveling? Noticed any troubling signs? Then, if you’re a manager, have a think about your team members. Ask them how they’re doing. Show you care.

Dean Yates is the head of journalist mental health and well-being strategy at Reuters. This is reprinted from his Facebook page with his permission.