Sebastian Junger On Brotherhood And Why Veterans Miss War

TED recently released a talk by Sebastian Junger filmed in January 2014 where the renowned war journalist addresses the question,... 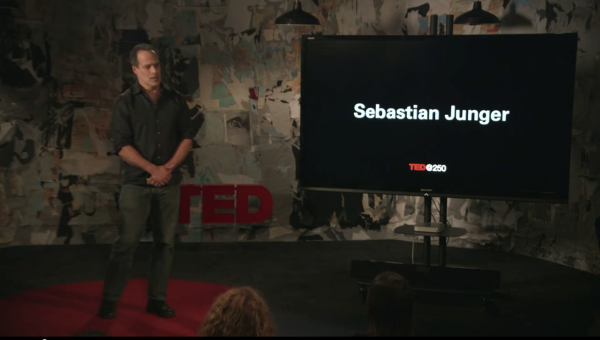 TED recently released a talk by Sebastian Junger filmed in January 2014 where the renowned war journalist addresses the question, “How is it someone can go through the worst experience imaginable, and come home, back to their home, and their family, their country, and miss the war?”

Junger describes the desolate environment that Battle Company endured in year-long rotations while fighting in the Korengal Valley in eastern Afghanistan. These young men saw some of the worst fighting in the duration of the war, with more than 42 servicemen killed and hundreds wounded between 2006 and 2009.

With the release of his new documentary, “Korengal”, which opens nationwide in on May 30, Junger aims to humanize the men who have returned home from Korengal. Where Oscar-nominated “Restrepo” sought to demonstrate the experience of serving at a remote outpost in a war zone, Junger’s new film portrays not only what war looks like, but what brotherhood looks like, which is Junger’s broader answer to the question posed in at the beginning, and the response from many veterans who have since returned home. Junger captures this as he describes a night back in the states watching Brendan O’Byrne — one of the team leaders in command while Junger was embedded with Second Platoon, Battle Company — explain to a woman at a party how he missed almost everything about being in Afghanistan:

I think what he missed is brotherhood. He missed, in some ways, the opposite of killing. What he missed was connection to the other men he was with. Now, brotherhood is different from friendship. Friendship happens in society, obviously. The more you like someone, the more you'd be willing to do for them. Brotherhood has nothing to do with how you feel about the other person. It's a mutual agreement in a group that you will put the welfare of the group, you will put the safety of everyone in the group above your own. In effect, you're saying, “I love these other people more than I love myself.”

It is in this way that we must explore not only how war works, but how it affects those who fight it for us.