An Army Pilot’s Tribute To The OH-58 Kiowa Warrior

The OH-58 Kiowa was never the U.S. Army’s first choice in a scout aircraft, yet the helicopter, its pilots, and... 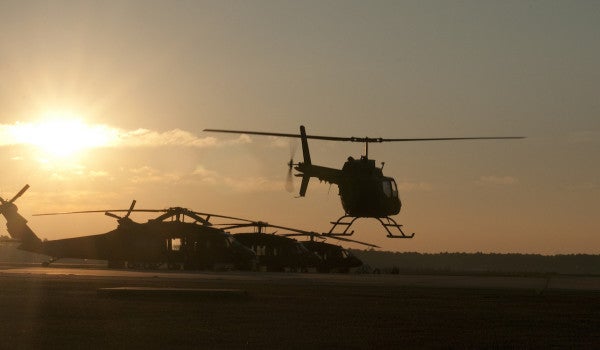 The OH-58 Kiowa was never the U.S. Army’s first choice in a scout aircraft, yet the helicopter, its pilots, and its mechanics have proven to be an unstoppable force in modern air cavalry tactics.

In 1960, the official search for a reliable scout aircraft began and after several years, the OH-58, then called the Bell YOH-4, was the definitive loser. In fact, the Hughes OH-6 Cayuse was the overall choice as the future scout aircraft for the Army. While Bell searched for a way to improve and market its YOH-4, Hughes fell behind in producing the necessary number of aircraft required by its contract. After adding additional cargo space, renaming the YOH-4 the Bell 206A Jet Ranger, and underbidding Hughes in a follow-up contract battle, the Army acquired the OH-58 as its scout aircraft.

In the early 1970s, the Army tried to replace the OH-58 again since it needed an aircraft with more power in higher density altitudes and higher temperatures. When Congress did not approve the budget for the new scout helicopter, the Army settled in improving its existing fleet of OH-58s. Army leadership decided to arm the OH-58 as well as improve its optics and avionics while also giving it a more powerful engine.

The OH-58D was armed with the potential for a .50 caliber machine gun and 70mm hydra rockets. Later, the aircraft would also be able to launch Hellfire and Stinger missiles, though the air-to-air threat necessary for Stingers largely went away with the Cold War. Since the OH-58D would now do most of its hiding at low levels of flight, the aircraft was also mounted with a Wire Strike Protection System at the front of the aircraft, becoming the first Army aircraft outfitted with such protection. Even from the beginning, the OH-58 was the bastard child of the Army helicopter inventory, though the underfunded and underpowered aircraft would distinguish itself in its decades of service.

The OH-58 has been used in every major deployment since the 1980s. During Operation Prime Chance in early 1988, it was used along with the AH-6 and MH-6 SEABAT teams to escort oil tankers through the Persian Gulf. National Guard Kiowa Warriors were used for drug interception in the 1990s, called reconnaissance and Aerial interdiction detachments. The Kiowa Warrior was used during the invasion of Panama, patrolling the demilitarized zone in Korea as well as operations in Haiti, Somalia, Desert Storm and Desert Shield.

No history of the Kiowa Warrior would be complete without mentioning its use in the most recent conflicts, Operation Iraqi Freedom and Operation Enduring Freedom. On Aug. 8, 2004, in Sadr City, Baghdad, Iraq, Chief Warrant Officer 3 Steven Wells was supporting ground troops when his fellow ship was struck by an RPG. The helicopter crashed in the middle of insurgent forces. Despite heavy small arms fire, Wells flew over to the downed crew to check on their safety. The aircrew was trying to extract themselves from an overturned helicopter with dozens of enemy troops closing in. While receiving heavy small arms and RPG fire, Wells coordinated the downed aircrew’s extraction to friendly forces while firing upon enemy combatants even as his aircraft was under 200 feet. Still enduring heavy fire, Wells executed two separate power-off autorotations as an attempt to land near the aircrew for self-extraction. Low on fuel and out of ammunition, he remained on station despite heavy damage to his own aircraft to ensure the downed aircrew reached friendly forces. Three separate times, Wells used his aircraft as a shield so that the downed aircrew could reach safety. For his actions, Wells earned the Silver Star.

For the first few years of Operation Enduring Freedom in Afghanistan, many aviation experts believed that the Kiowa Warrior could not fly in the high-density altitude of the Afghanistan mountains. The OH-58D has faced negative perceptions about its capability throughout its history and once again, the naysayers were fooled. The first unit to use the OH-58D in Afghanistan was Task Force Out Front, 101st Combat Aviation Brigade. Certainly the higher-density altitude in Afghanistan caused complications for the underpowered, single-engine helicopter, but that did not stop the OH 58D from acts completing of extreme courage.

Chief Warrant Officer 4 Patrick Benson and his co-pilot Chief Warrant Officer 3 Adam Stead are two extraordinary examples of how scout pilots have used their aircraft as a deterrent to help ground troops. According to a report in the Huntsville Times, on Sept. 8, 2009, Benson and Stead were supporting a group of Marines pinned down near a small village in the Shuryak Valley of eastern Afghanistan. A UH-60 Black Hawk had been called in to medevac several wounded Marines. The Black Hawk was particularly vulnerable because it couldn’t land on the steep mountainside. It hovered in the air as it hoisted wounded Marines one at a time, a sitting target for the enemy force around. Knowing the insurgents could not resist targeting and attacking a helicopter, Benson and Stead used their Kiowa Warrior as a deterrent to distract the combatants from targeting the medevac operation. They looked between their feet and out the door of the aircraft to find and suppress enemy combatants.

Stead was hit by small arms fire and incapacitated, but Benson kept the suppression mission going until all wounded Marines were hoisted into the UH-60. Benson was also hit by a AK-47 round in the leg, but continued engaging the enemy until everyone was loaded. Even though he and his co-pilot also needed medical attention, Benson parked his aircraft at the nearest forward operating base, not at the medevac pad, but with the unit Humvees so he would not get in the way of the wounded Marines and the medical attention they needed. Benson was awarded with the Distinguished Flying Cross. Fortunately, both pilots recovered from their injuries.

This year’s defense budget designated that the entire Army fleet of OH-58s be retired. With no plans to replace it, the scout mission now shifts to the AH-64 Apache and unmanned aerial vehicles. While both aircraft certainly have intelligent and capable operators, the loss of the OH-58 signals the loss of personal grit in aviation. Gone now are the days of flying into battle with the doors off, Stetsons on, heads on a swivel with an M-4 ready to fire out the door. Advanced technology separates our scouts from the very personal fight for troops on the ground.

The OH-58 Kiowa Warrior and its aircrews have distinguished themselves in an underfunded and underpowered aircraft not because of great technology or available engine power, but by their ability to fight in an unpredictable yet effective manner. As the last OH-58 Kiowa Warrior is shrink wrapped and sent to the boneyard, remember how sometimes the seemingly smallest and weakest fighter is the one we should prepare for.