The Air Force personnel tasked with overseeing security and force protection for a critical leg of the U.S. nuclear triad... 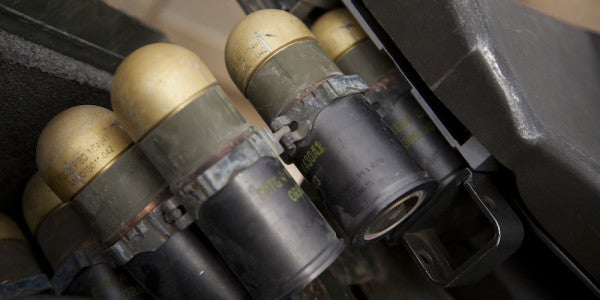 The Air Force personnel tasked with overseeing security and force protection for a critical leg of the U.S. nuclear triad would like your help tracking down some of the explosives they lost.

Airmen with the 91st Security Forces Group with at Minot Air Force Base in North Dakota charged keeping an eye on some 150 Minuteman III missile silos spread across the northwestern United States somehow managed to lose a belt of rounds for a Mk 19 automatic grenade launcher on May 1, an Air Force spokesman said.

Minot officials believe the ammo can fell off the back of a Humvee while traveling between silo locations in North Dakota's Mountrail County.

According to Sheriff Ken Halvorson, more than 100 airmen combed the six-mile stretch of rough terrain and gravel back roads in search of the explosives after Minot officials realized the ammo can had gone missing.

But apparently the Air Force reportedly only informed county law enforcement officials about the missing explosives on May 4, three days later.

“The lack of information being released by the Air Force on this loss and (Halvorson’s) concern for the safety of the citizens in the area that may come into contact with them prompted the release of this information,” the Mountrail County Sheriff's Office said in a May 11 statement.

Indeed, the Air Force only released a public statement on the incident on the evening of May 11, a full week after briefing country law enforcement and well after Sheriff Halvorson alerted the media.

The Air Force Office of Special Investigations is currently offering up $5,000 for tips that help officials track down the missing rounds (anyone with information should contact AFOSI at 701-723-7909).

“These explosives are very dangerous, and anyone having information on the whereabouts of these items is urged to contact the Mountrail County Sheriff's Department immediately so the items can be retrieved.”

As a unit of the 91st Missile Wing, the 91st Security Forces Group is the largest military police contingent at Minot, responsible for overseeing a fleet some 150 Minuteman III missiles spread across the northwestern United States for strategic deterrence.