Anyone who’d spent five minutes in Afghanistan in the last 20 years knew it was a failed state waiting to happen. 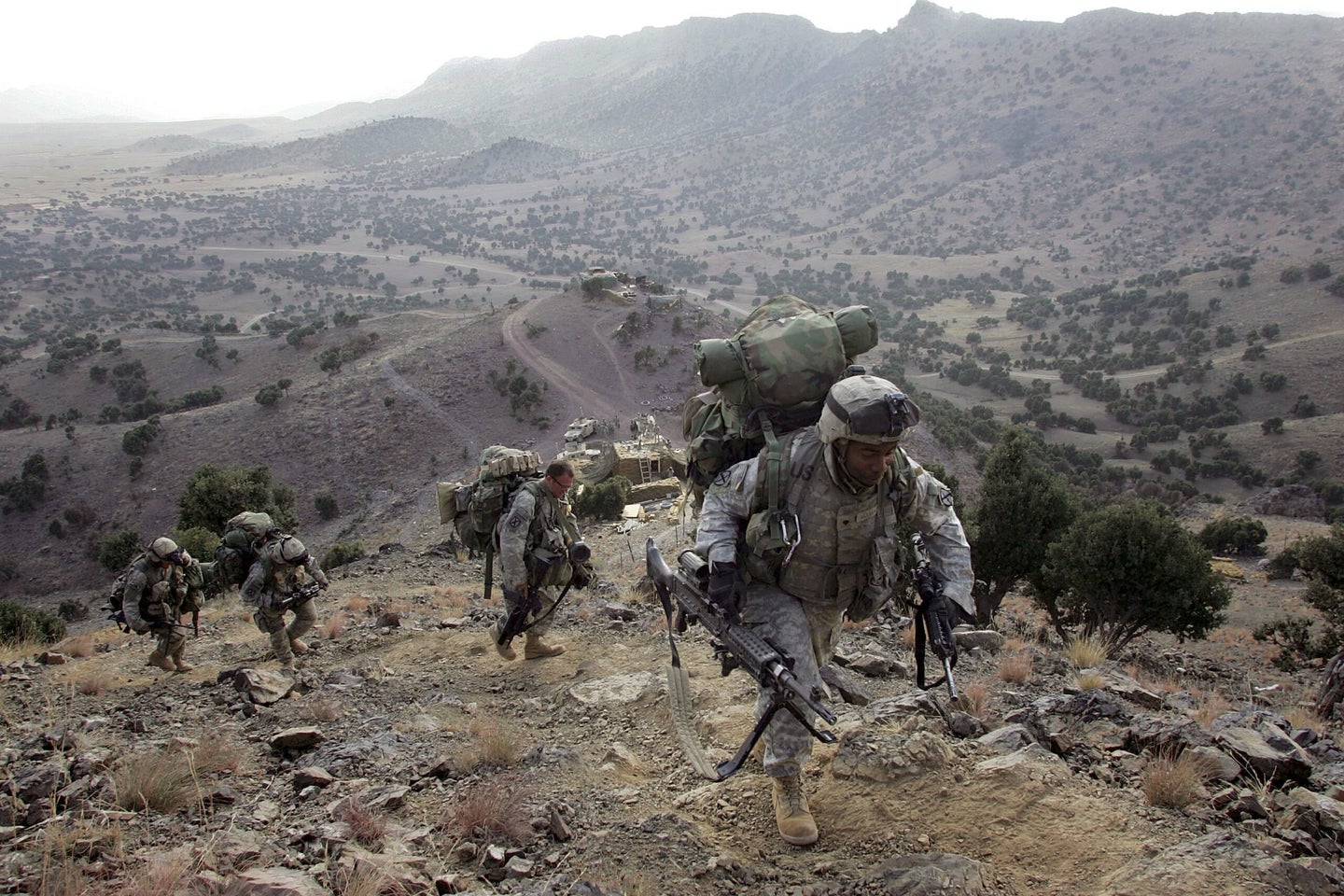 AFGHANISTAN-PAKISTAN BORDER, AFGHANISTAN - OCTOBER 20: U.S. soldiers from the 2-87 Infantry climb towards a forward observation post October 20, 2006 overlooking the Afghanistan-Pakistan border, from the Paktika province of eastern Afghanistan. The outpost, only 800 meters from the border, is frequently attacked by Taliban forces, many of whom cross over from the South Waziristan tribal area of Pakistan, according to American soldiers. (Photo by John Moore/Getty Images).
SHARE

In September 2014, I went with a friend to a screening of the documentary “The Last Days in Vietnam” at the old Sunshine Theater on Houston Street in New York City before it closed its doors for good. The scenes of desperate Foreign Service workers and our Vietnamese allies scrambling to make it onto a helicopter on the roof of the U.S. Embassy in Saigon filled me with a mixture of sympathy and dread.

The following evening I went to my fiction writers’ workshop at The New School, where I was pursuing a Master’s degree in creative writing. In the elevator, I ran into my professor, who happened to be a Vietnam veteran. I shared with him my anecdote of having gone to see a documentary film about the war he had fought in, hoping to elicit some type of genuine response — perhaps even the recounting of an old ‘Nam story where “Charlie” had his team pinned down, and they had to call for close air support. After all, we were in the business of storytelling.

But he just shrugged indifferently and muttered something off-topic. To this day, I can’t remember exactly what he said. His reaction left me puzzled. I didn’t understand at the time how he could care so little about a defining moment in the war he’d fought as a young man. But now I understand it perfectly.

Years before, I was serving as a Navy corpsman with an Army advisor team in Central and Eastern Afghanistan. Our mission was to train the Afghan National Army (ANA) soldiers to conduct combat operations against the Taliban and whoever else was causing problems in the country.

Nearly six years had passed since the beginning of the war. We were at the height of the troop “surge” — a massive build-up of combat troops to turn the tide of the Iraq War — and many Americans didn’t even realize that the U.S military was still fighting in Afghanistan.

In the beginning, I was mentally, emotionally, and even spiritually committed to the cause of standing up Afghanistan’s armed forces so they could one day directly confront the Taliban and protect their sovereign territory, as every state has the right to do and obligation to do. I quickly realized how unrealistic such an expectation was.

Anyone who’d spent five minutes in Afghanistan anytime in the last 20 years knew immediately that it was a failed state waiting to happen. The grift was indescribable, the level of incompetence, cartoonishly absurd.

The equipment that we gifted the Afghan National Army — millions upon millions of taxpayer dollars worth of weapons, vehicles, generators and all manner of things fundamental to the execution of a robust military mission — would invariably end up in the bazaar outside of the base, for sale at greatly reduced prices.

Afghan commanders got paid based on the number of soldiers in their units, many of whom were no-shows or “ghost soldiers” who never existed in the first place.

And then, there were the betrayals. On one of my first missions — a simple convoy operation through Kabul from Camp Cobra to Camp Blackhorse and back — we had to line up the ANA soldiers and take their cellphones, so they wouldn’t relay our position to enemy forces.

I couldn’t believe it. Here we were, putting our lives on the line for these people and their country, and we couldn’t even trust them not to stab us in the back.

When I served in Afghanistan, so-called “green-on-blue” or “insider attacks,” where Afghan soldiers turned on their foreign counterparts, were extremely rare. But a few years later in 2012, there was a spate of such attacks that made it nearly impossible for American and Coalition forces to work effectively with the ANA.

I had some close calls: The Humvee I was riding in rolled off a small cliff into a rice paddy. Twice.

I was in the vicinity of an improvised explosive device shockwave that reverberated in my chest like a heavy bassline blasted through a subwoofer at an underground rave. I was shot at, most likely by AK-47s and PK machine guns and at least one rocket-propelled grenade, but it was dark and I was running for cover, so there’s no way to know for certain.

I treated my fellow soldiers who had been struck with bullets, or blown out of their Humvee by an IED buried in the ground right outside our forward operating base, had their legs snapped, and their faces slashed open by hot shrapnel.

And I carried the remains of a man I’d never met — minus his right leg — in a black plastic bag, with two or three other soldiers assisting me, to a helicopter that did not quite touch down, and passed them to the crew chief who looked at me with an expression that led me to believe he’d done this many times before. The leg was recovered from the blast site later that evening.

At a certain point — and I think this is true for just about anyone who has cycled through the theaters of Iraq or Afghanistan after Sept. 11,  you just accept that the mission is futile and the best thing you can do is honor your commitment to the men and women around you and to your country and try to make it home in one piece. So, that’s what I did.

I came home and raged for four years. Then I sobered up. I studied writing and wrote a book. Thanks to a grant from the David Lynch Foundation, I began a practice of twice daily meditation six years ago.

I had to divorce myself from any desired outcomes in Afghanistan and just wait for the other shoe to inevitably drop for my own well-being. It came much faster than anyone anticipated, but it was not a great surprise.

If I weren’t so emotionally detached from all things Afghan, I might feel great compassion and sorrow for those who remain under Taliban rule, especially women and girls. I might feel ashamed at our betrayal of our Afghan interpreters and partners who’ve risked their lives with us every step of the way in this great tragedy. I might regret the blood and treasure and the enormous amount of effort and good will that went toward trying to make something good out of that troubled place that ultimately came to nothing. Intellectually, I think these things. But, emotionally, I don’t feel them, because I can’t.

So when I see images of helicopters evacuating desperate Foreign Service workers and, hopefully, our Afghan allies off the roof of the former U.S. Embassy in Kabul, I just shrug indifferently and mutter something off-topic. I can’t even remember what.

Brandon Caro was a U.S. Navy corpsman (combat medic) who deployed to Afghanistan in 2006-2007. He is the author of the novel Old Silk Road (Post Hill Press, 2015). His nonfiction work has appeared in The New York Times, The Daily Beast, The Daily News, among other publications. He resides in Austin, Texas.