Do You See The Sniper In This Photo? He Sees You.

Do you see him? In the bottom third of the frame. No? Because he sees you. Look closely at the... 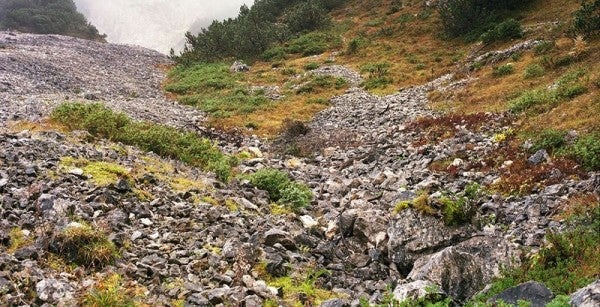 Do you see him? In the bottom third of the frame. No? Because he sees you.

Look closely at the two boulders on the bottom right with the twig sticking out from the top one. That’s the muzzle of a sniper rifle pointed directly at the camera, and therefore, your face.

If this was real life, you’d be dead.

In 2010, Simon Menner contacted the German army for his work on “Camouflage,” a photo project in which he takes photos of snipers in concealed positions, according to a January 2015 article by David Rosenberg for Slate. His first shoot took place in a northern forest with a group of young and relatively inexperienced soldiers. But in 2013, Menner was given permission to continue the project in the German Alps with a group of seasoned soldiers.

On his website, Menner notes that “even though they are invisible due to their professionalism, there are hidden snipers in every of these images. They are aiming at the camera and therefore at the viewer.”

For those who doubt whether or not there are any snipers in the photos, Menner remarks that “first of all, it is real,” and whoever has doubts should contact the German army.

“There were snipers present in every single shot and they were in fact, ordered to aim at the camera, so they could see me, even though I was almost never able to see them,” Menner told Slate via email. “The professional training they have received means that in some of the images, no trace of them can be seen, even if you look at the image pixel by pixel. This is exactly how a sniper in a forest is supposed to appear.”

To see more photos of the camouflaged snipers, check out the Slate article.