We Asked Gen. Petraeus Whether The Iraq War Was Really Worth It. Here’s What He Said.

Fifteen years of war have turned Iraqi cities such as Ramadi, Fallujah, and Mosul into ruins. Iraq remains as divided... 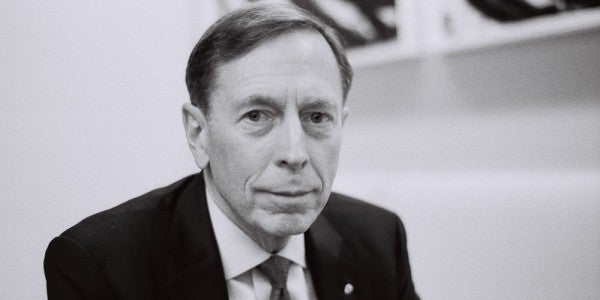 Fifteen years of war have turned Iraqi cities such as Ramadi, Fallujah, and Mosul into ruins. Iraq remains as divided as ever along sectarian lines, despite the deaths of more than 4,500 U.S. troops and untold numbers of Iraqis.

U.S. troops remain in Iraq to help advise and assist Iraqi forces as they try to prevent ISIS from launching yet another insurgency. Meanwhile, Iran has flooded the country with thousands of proxy fighters, giving it a large say in what the government of Iraq does post-ISIS.

This wasn’t the Iraq that was supposed to emerge when U.S. troops crossed the berm from Kuwait to Iraq in March 2003. Nor is this the Iraq that troops who trounced al Qaeda during the surge bled for. There are few tangible signs of success, and Iraq’s future is still unclear.

Seeing all this chaos prompts many Iraq veterans to wonder: Was what they fought for worth the sacrifices they made?

We posed that question to the Iraq War’s most influential figure, retired Army Gen. David Petraeus, who led U.S. forces in Iraq during the 2007-2008 surge in an attempt to stop a Sunni-Shiite civil war.

“I think everybody who was in Iraq, who served there, who knows the sacrifice it entails, who knows the cost in blood and in treasure… has been frustrated to see how the country slid back after we left in late 2011,” Petraeus said in an exclusive interview. “But at the end of the day, I think we also have a degree of quiet pride that when our country needed us, we answered the call.”

The “truly remarkable Americans” who joined the military after the Sept. 11, 2001, terrorist attacks knew that their country would send them to war, said Petraeus, who added that it was an incredible privilege for him to lead U.S. troops in Iraq and Afghanistan.

“Our job was to do what our country needed us to do to carry out the policies that were decided,” Petraeus said. “We certainly did that to the best of our ability. The accomplishments during the surge, in particular in Iraq, were truly historic, if you think about driving violence down by some 85% and bringing a country back together that had been on the verge of an all-out Sunni-Shia civil war.”

The United States made some grave errors in 2003, such as throwing thousands of Iraqi troops and civil servants out of work — dangerous missteps that unleashed widespread violence, which took the U.S. military years to quell. Petraeus recalled that the U.S.-led forces were only able to break the cycle of violence when they made Iraqi civilians’ security their top priority — a task that required the U.S. to set up 77 combat outposts in Baghdad alone.

“We should remember that there was this period after the end of the surge in the summer of 2008 that stretched all the way into the end of 2011 that was a reasonably good period with violence generally going down further during that time,” said Petraeus, who left Iraq in September 2008 to lead U.S. Central Command until July 2010.

Those commanders inflamed tensions with Iraqi Sunnis and were “completely incapable” during ISIS’s 2014 offensive into Nineveh province, he said. Although they outnumbered ISIS fighters, the Iraqi security forces were badly fractured at the time, with no coherent chain of command no communication between different units.

Iraqi troops could have held ISIS’s advance into Nineveh province and then hit ISIS on its flanks using armored units, but their commanders abandoned them, he said.

“The leadership literally went out the back door, in some cases, and the troops followed,” Petraeus said.

Current Prime Minister Haider al-Abadi has made efforts to reconcile with Sunnis, and the Iraqi security forces have shown that with competent leaders and U.S. support, they are more than capable of defeating ISIS in conventional battles, he said.

For example, the Iraqis prevailed in difficult urban fighting during the battle for Mosul, once a city of 2 million people, which had very tight and narrow streets, he said.

“ISIS forces that had years to prepare for urban combat were gradually rooted out by the Iraqi security forces on the front lines — to be sure, with American advisors and airpower and all the rest helping them,” Petraeus said. “But at the end of the day, they did the fighting and the bulk of the dying for their country in defeating the Islamic State that was on Iraqi soil.”

Going forward, U.S. troops will still be needed in country to train the Iraqi military on how best to use their American-made weaponry, but the future of the U.S. advise-and-assist mission will depend on what ISIS does next.

“The army that was the Islamic State has by and large been defeated in Iraq,” Petraeus said. “But there will be those who will become guerrillas, terrorist cells, and insurgents.”

History may not have reached its verdict yet on Iraq as a U.S. victory or defeat, but Petraeus said the troops who fought there have secured their place as worthy successors to the generation of GIs who won World War II.

“I think the post-9/11 generation of veterans truly is America’s new greatest generation,” Petraeus said. “They deserve that title.”