The Insider Attack In Syria That The Pentagon Denies Ever Happened

"It’s kind of ridiculous that a Marine gets shot and nobody hears about it." 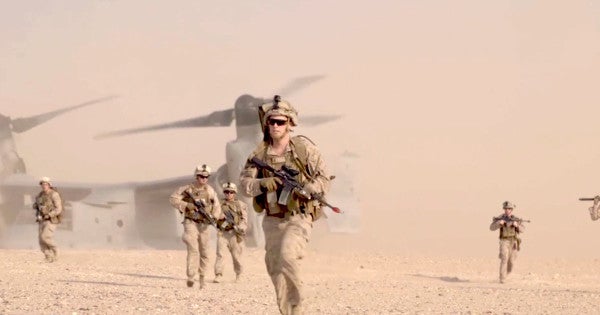 It was a pitch black Saturday evening at a remote outpost in Syria last February when Sgt. Cameron Halkovich and Cpl. Kane Downey began their rounds, checking Marines on perimeter security.

As sergeant and corporal of the guard, their job was to set up the watch schedule, man the radios, and most importantly, ensure Marines on post were staying alert and providing security for artillerymen who had been pummeling ISIS fighters for months from the small, Army-run base in Deir al-Zour Province. Besides an Army Special Forces team, it hosted a forward surgical team, more than dozen Marine infantrymen, and a platoon-sized element of Syrian Democratic Forces allied with the U.S.

But on that late-winter night, one of the Americans’ SDF partners would turn on them and fire two shots — marking the first known instance of an insider attack during Operation Inherent Resolve. And while the Pentagon often announces when service members are killed or wounded during these “insider” or “green on blue” attacks, it made no such announcement for Halkovich, a combat engineer, who was shot twice in the leg and survived.

This account of the Feb. 17 shooting of a U.S. Marine by a member of the Syrian militia he was supporting is based on interviews with multiple sources, military award documents, and scant details released by the Pentagon. It has also become an open secret among the 1,000-plus Marines and sailors of the unit Halkovich was attached to — 2nd Battalion, 7th Marine Regiment, based in Twentynine Palms, California.

“It’s kind of ridiculous that a Marine gets shot and nobody hears about it,” said one source familiar with the incident, who spoke on condition of anonymity out of fear of reprisal. “It kind of blows my mind.”

In fact, when asked by Task & Purpose whether there had ever been an insider attack during Operation Inherent Resolve, a coalition statement flatly denied it: “We have no recorded incidents of insider attacks during OIR.”

The small contingent of Marines from Weapons Company, 2nd Battalion, 7th Marine Regiment had a boring and often thankless job providing security at the outpost, a so-called “mission support site” which Task & Purpose has chosen not to name for operational security reasons. Though they occasionally left the wire, the Marines spent most of their time on rooftops or in the turret of a Mine-Resistant Ambush Protected truck, as Army artillerymen safely pounded ISIS positions and Special Forces soldiers trained and supported the SDF in battle.

They settled into a familiar routine after about five months in Syria: Some Marines slept or ate, while others manned a vehicle-mounted .50 caliber machine-gun or looked for infiltrators in the surrounding desert with night vision and thermal imaging devices. Meanwhile, the SDF had their own routine, manning a gate that served as the main entry point into the camp.

The Marines mostly kept to themselves, except to share an occasional cigarette with the Kurdish-dominated SDF. Sometimes the Kurds would slaughter a goat and cook it up for their American patrons. But for reasons that remain unclear, relations began to deteriorate in early February.

“There was an incident with an SDF guy racking his AK… but the Marine somehow deescalated the situation and nothing was fired,” the source said of a Kurdish soldier who chambered a round in his AK-47 rifle, threatening a Marine about a week prior to the Halkovich shooting. That SDF soldier was subsequently kicked off the base.

“Tensions were super high at this point,” the source added.

But just as one potential insider threat was removed, a new one seemed to present itself just a week later, illustrating the fragile nature of some of America’s partnerships with foreign militaries — which are increasingly being used to fight terror groups through a strategy of “advise and assist.”

It began with a radio call. Alerted to a commotion at the SDF-manned gate, Halkovich and Downey ran to check it out. When they got there, SDF soldiers told the Marines a truck outside the gate was just having car trouble.

It was a lie, one that was quickly exposed when a Syrian civilian in the vehicle held up a dead child that was “soaked in blood,” according to the source. Looking closer, the Marines saw a truck bed filled with about eight dead or wounded civilians. It was a mass-casualty incident, and they knew they had to help.

The SDF told the Marines no, in clear violation of the Geneva Conventions, which strictly prohibits withholding medical assistance or discriminating in providing care.

“SDF was trying to tell us that we weren’t allowed to treat them, but… we’re going to help anybody we can,” the source said, adding that the partner force “was super upset about it.”

Another source, who also spoke on condition of anonymity out of fear of reprisal, said the injured group, comprised mostly of women and children, was turned away by the SDF because they were not Kurdish.

The first source gave a similar account: “It was purely racial. They refused to give them an ambulance.”

Halkovich and Downey pushed the SDF soldiers out of the way and opened the gate, amid screaming from both sides in English and Arabic. They moved concertina wire aside while another Marine called in a mass casualty to the Army surgical team. Others placed victims on litters and shuffled them in.

Army medics managed to save four of the victims, according to the first source. But the SDF “was not happy,” the other source said. The Kurds even threatened to kick the Marines out of the compound for their humanitarian act.

Eventually, tensions settled and things went back to normal — until dark.

Around 9 p.m. that night, Halkovich and Downey decided to check on Lance Cpl. Jay Smith, who was stationed in the MRAP turret behind a .50 caliber machine gun.

After walking the 100 meters or so from their quarters, Halkovich stopped to urinate. Not thinking anything of it, Downey kept going. But as he crossed an intersection between buildings near the main gate, he realized something seemed strange.

At the entry control point, at least one SDF soldier normally watched the gate at all times. But nobody was there.

Neither Marine was aware that hidden in the shadows, one of the SDF soldiers had abandoned his post and was lying in wait.

Downey got to the door of the MRAP and reached for the handle. But before he opened it, he heard two gunshots, the distinctive report of an AK-47.

He turned around and saw Halkovich on the ground, his face obscured. Downey would later recount to his fellow Marines and military investigators that he saw a lone SDF soldier, standing over Halkovich with a rifle.

Downey then aimed in with his M4 rifle and dropped the attacker with a “hammer pair” — a well-aimed series of two quick shots to the chest. With the SDF soldier now dead, Downey kicked his weapon away and yelled to Smith in the turret: “Halko was shot! Halko was shot!”

Halkovich took two 7.62mm bullets to the left leg that went clean through — though, in the darkness, Downey initially thought his comrade was dead. With Downey’s red-lens headlamp shining down on his face, Halkovich looked up. Then he looked at his leg, then back at Downey, and finally, he screamed.

According to the award citation for the Joint Service Commendation Medal that Downey would receive in March for what was called a “shooting incident,” the Marine “acted decisively to eliminate the threat to his comrade” before applying a tourniquet to Halkovich’s leg and fireman-carrying him to the surgical facility. (The citation, signed by OIR Commanding General Lt. Gen. Paul Funk, however, takes pains to avoid identifying “the shooter.”)

Smith, for his part, remained at his post and called in the shooting on the radio, prompting the rest of the Marines to respond to the scene. Just as the Marines had done earlier in the day for civilians, they now watched as one of their own was brought to the Army surgeons stationed nearby.

Halkovich was medically evacuated from the post soon after, while Downey was brought back to a larger camp to explain what had happened to military investigators.

But for months afterward, the Marines continued to live side-by-side with the Syrian partners they had come to fear.

Spokesmen for the Syrian Democratic Forces did not respond to a request for comment.

The Marines of 2/7 returned with little fanfare from their combat deployment in April. Halkovich received the Purple Heart that same month and is still recovering from his wounds at the Corps’ Wounded Warrior Regiment at Camp Pendleton, California. At Marine Corps Base 29 Palms in March, Downey would receive his Joint Service Commendation Medal for saving Halkovich’s life.

Meanwhile, a new group of Marines has taken 2/7’s place on the Corps’ Special Purpose MAGTF Crisis Response-Central Command, where, like their counterparts, they could potentially deploy to a theater of war where friends can become enemies in the blink of an eye.

Were they warned of the shooting in February? Told to prepare for the possibility of an insider attack by the SDF? A spokesperson for the unit did not respond to those questions.

“They said it would be on the front page of every newspaper in the country and yet no justice was ever done for my wounded brother,” the second source told me. “That is the only reason I’m telling you this because no one knows what happened out there… and nothing came of it.”