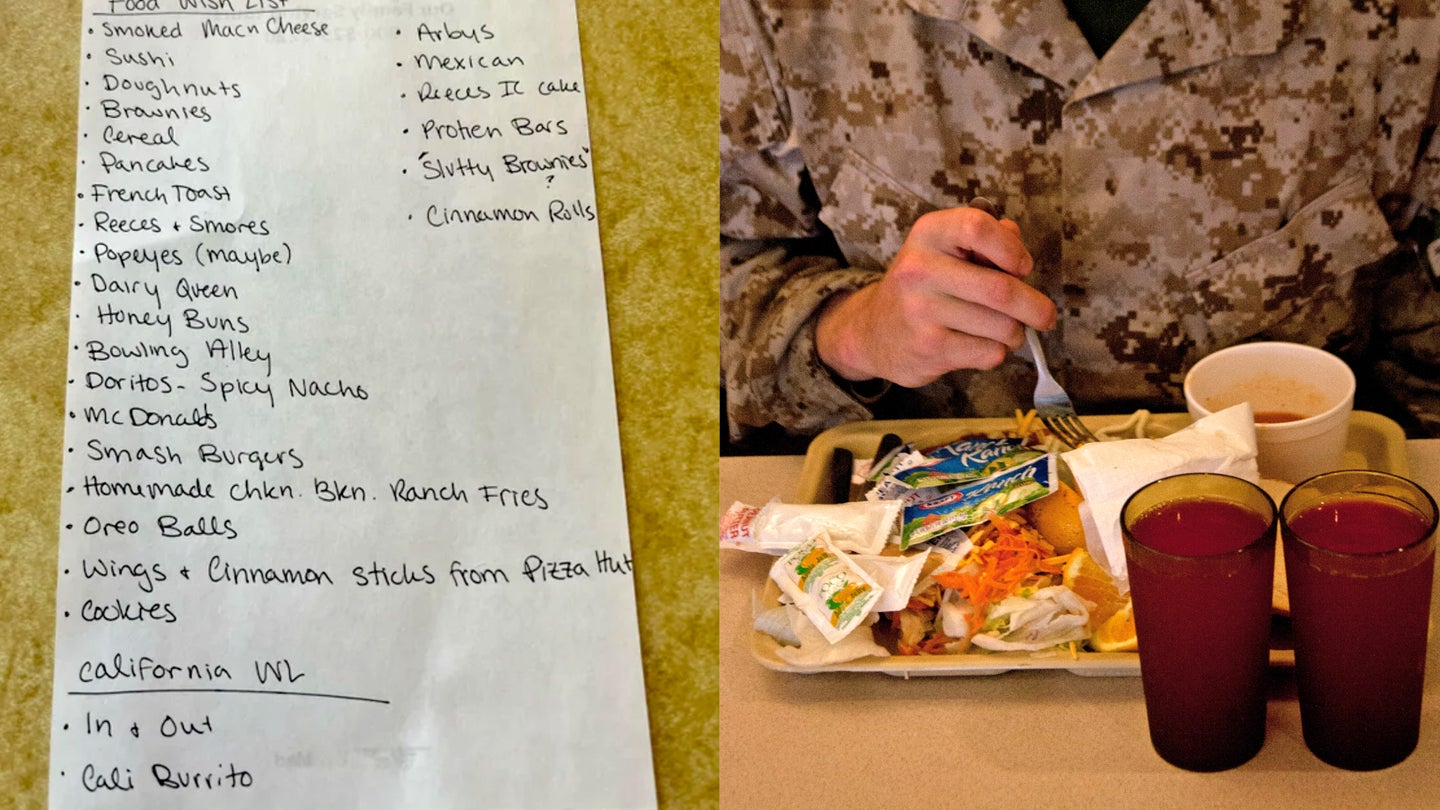 After 13 weeks of Marine Corps recruit training, what would you want for your first meal that isn’t supervised by a drill instructor? It’s not like military mess halls are serving “shit on a shingle” or brain and eggs anymore, but all that chicken and rice can’t compete with a home cooked meal — or a double bacon Smashburger. Yum.

Last week, one Reddit user posted a dream tasting menu sent by her younger brother for his upcoming traditional 10 days of leave, and it features every delicacy a hungry Marine-in-the-making could possibly hope for.

“Little brother is coming home from bootcamp next week. This is everything he wants,” reads this post. And what he wants is extensive.

There’s plenty to start off the day, from pancakes to cereal to cinnamon rolls and honey buns. For a main course, there’s smoked mac ‘n cheese and chicken bacon ranch fries. With plenty of room still left over for snacking, of course, there are items like cookies and spicy nacho flavored Doritos. Plenty of fast food is also on the menu, from McDonald’s to Dairy Queen to wings and cinnamon sticks from Pizza Hut (and possibly Popeye’s, if it’s possible). The man is so hungry he even wants Arby’s.

As anyone who has gone through basic military training can attest to, meal times are not designed for the recruit to savor it. You’ve got a few minutes to eat as many calories as you can, and the food you’re getting isn’t anything to write home about. If anything, it’s the opposite, and recruits will write home about all the burgers and barbecue and burritos they could be eating, just as this recruit did. If anyone can go bite for bite with Joey Chestnut — you know, the guy who ate 76 hot dogs in 10 minutes — it’s any gourmand who’s just graduated from basic training and hasn’t had a Reese’s peanut butter cup for three months.

Many of the more than 6,000 responses to the list on Reddit detailed other post-basic training indulgences, including three meals from McDonald’s in one day and a full rack of ribs along with a steak dinner at a state fair.

So, if your first meal after basic training (or Ranger School or any other intense military school) is one of the sweetest, savory, most rich and fulfilling meals of your life, what would you have? What did you have? Chinese buffet? Waffle House? You’ve got a little money in your pocket and no one telling you “utensils down!”

Let us know in the comments below, on social media, or email max.hauptman@taskandpurpose.com, and we’ll round up a nice tasting menu.