A new trailer for Netflix's ​Triple Frontier ​recently dropped, and it looks like a gritty mash-up of post-9/11 war dramas ​and crime thrillers. 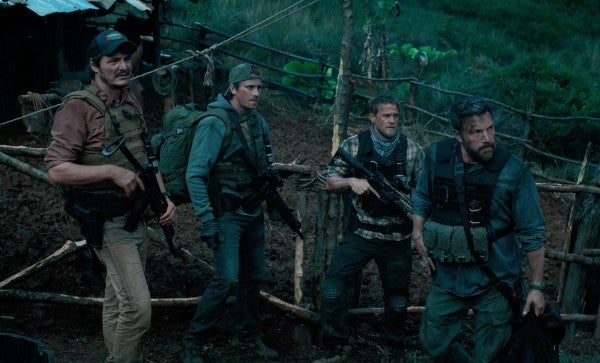 A new trailer for Netflix's Triple Frontier dropped last week, and it looks like a gritty mash-up of post-9/11 war dramas Zero Dark Thirty and Hurt Locker and crime thrillers Narcos and The Town.

The movie's star-studded cast includes Ben Affleck, Oscar Isaac, Charlie Hunnam, Garrett Hedlund and Pedro Pascal, just about all of whom have tried their hand (successfully) at either crime dramas, action flicks, or both.

Triple Frontier is directed and co-written by J.C. Chandor (A Most Violent Year, All is Lost, Margin Call) who's joined on the writing front by Mark Boal (Hurt Locker, Zero Dark Thirty.)

Here's the basic premise: A bunch of ex-operators who are pissed about their shitty retirement pay, crap benefits, and limited career prospects following their distinguished SOF careers come up with a plan, and no, it's not to found their own apparel company.

The job: Rob a notorious cartel leader's stash in a sparsely populated, and unspecified area in South America, and make off like bandits with the ill-begotten blood money. It goes about as well as you might expect. A quick and easy heist devolves into a shitstorm in the jungle as they're hunted by the cartel, paramilitary forces, crooked cops, and anyone else whose checkbook just got a bit lighter. For the first time in their lives, these men are risking life and limb for themselves, not their country.

As Affleck explains in the Feb. 15 trailer, they're not going into this with the flag on their shoulder. There's no air support. No casevacs. No backup.

“You guys need to own the fact that what we're about to do is criminal,” he says in the trailer.

Triple Frontier premieres on theatrically March 6, and on Netflix March 13.

SEE ALSO: Hulu's 'Catch-22' remake looks like the sarcastic war story we've all been waiting for

WATCH NEXT: 'You Were Never Really Here' Review