5 Ways You Can Stand Out When Applying To Top Colleges

Getting into a good college isn’t easy for anyone, let alone a veteran, who may be several years removed from... 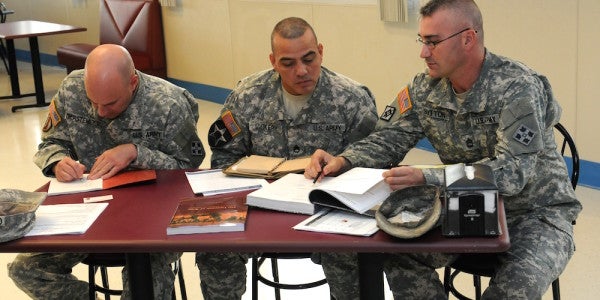 Getting into a good college isn’t easy for anyone, let alone a veteran, who may be several years removed from academia by the time he or she is ready to apply. With thousands of students vying for each available seat, admission rates are the lowest they’ve ever been; in Fall 2013, some of the best universities had admission rates as low as 5.7 percent. But that shouldn’t stop veterans from applying. If you’re willing to work for it, you can join the ranks of the academic elite.

“Tutors, time in the library, missed social outings all for the cause of being successful—that’s how I got into college,” explains Air Force veteran and current University of California, Berkeley student Matthew Matlock. “Being self-aware has helped. I know I’m far from a MENSA member and have no delusions of grandeur that I can just not study and ace my classes. Knowing myself and how I personally can be successful has been crucial.”

Related: 4 Things You Need To Consider When Applying To College »

If you’re hoping to get into a prestigious college or university, like Berkeley, there are steps you can take — even if you’re still on active duty — to help make the process a little less painful and lot more successful.

“Before you jump in and choose a major, ask yourself, ‘What do I want to do when I complete my degree?’ In other words, what’s your end game? Answering that question identifies the course of study that aligns with your future career path and, subsequently, the best college for you,” advises Karen Cambronero, the military admissions liaison at Texas A&M;, which currently has more than 1,150 student veterans enrolled. While this advice may seem obvious, there are plenty of college students who have no idea what they want to do yet, and that makes finding the right school, and right major, much harder. Having even a vague idea of what you want to do will help make the application process easier.

Just because a university is one of the best doesn’t mean it’s going to be the best fit for you, Cambronero says. A school may sound impressive, but if it doesn’t have the course of study you need to reach your goals, or a campus culture that will help you succeed, it’s not going to help you get ahead.

“Start looking early. Figure out what our dream school is, and research the hell out of it. Talk to people that go/went there, visit the campus, know the requirements frontwards, backwards and by heart,” Matlock says. But also, “Plan for failure by having backups. I applied to four other schools with the assumption that I wouldn’t get my dream school.”

Some things to look for when applying are:

For Army veteran Roy Scranton, finding a school where he would be comfortable was one of the top priorities after separating from the military in 2006. Scranton, who is currently pursuing his Ph.D. at Princeton, went to the New School for his bachelor’s and master’s degrees. “One of the reasons why the New School was so appealing is that they had a general bachelor’s degree in liberal arts, so I wouldn’t have to pick what I wanted to do right away,” Scranton says. “They also have a strong adult education program there, and I really couldn’t picture myself in a classroom full of 18-year-olds figuring things out for the first time. Especially after being in Iraq and being in the army, I wanted to be in a class with grownups.”

Brian Vargas, a U.S. Marine Corps veteran who is currently a senior at University of California, Berkeley, had a different tactic for researching the school: He made friends with current students, including other student veterans. “I formed relationships with some guys who were already here, and I got to know them quite a bit over the summer,” Vargas says. Through his relationships with other students, Vargas was able to get a better feel for Berkeley, and got the inside scoop on what he would need to do to join their ranks. Fellow students are also the ones who make the acceptance calls to student veterans, so when Vargas got in — a feat he believed would be a long shot — he got to hear the news from one of his new friends.

3. Knock out pre-requisites and easy credits as soon as you can.

A lot of veterans have found success by taking care of the pre-requisite and “easy” classes early. Some, like Scranton, began taking online classes while still on active duty, while others, like Matlock, started at community college after returning to civilian life.

“I started at Portland Community College,” explains Matlock, who last year transferred to Berkeley to study business administration. “I was initially intimidated because I was never successful in academics in high school. However, with a lot more maturity and a desire to learn, I quickly adapted to the environment and actually enjoyed it.”

These early courses also help show the school that you’re putting in the effort and are willing to work hard to reach your goals. “A university needs to see that you can actually do the academic work that you’re signing up to do. They don’t want to set you up to fail,” Cambronero explains. “It’s not a whole lot different than trying to get in to a particular MOS. No SEAL (Ranger, Recon, etc.) ever made the program without having to prove they could hack it.”

4. Gather up all your paperwork, and be sure to get it in on time.

Unlike with the military, there won’t be anyone there telling you what you need to do and when you need to do it, Cambronero says, and that may be a shock to the system. So you need to stay on top of things. Make sure you know what the application deadlines are and what materials you need to send, and be sure to get them in on time.

“Not all colleges are alike,” Cambronero explains, “so you need to verify which documents they’ll need, such as official college transcripts from each school you’ve attended, high-school transcripts, essays, letters of recommendation, etc.”

Keep in mind that because you’re coming from the military, you might not have the most traditional application. But you can work around it. “I had a lot more transcripts to track down than most 18-year-olds do,” Scranton says. “And getting recommendation letters was another interesting thing. I wound up asking friends of mine, people the same age as me who had become professionals in their own right while I was fighting in Iraq.”

5. Don’t underestimate the value of your personal statement.

Every college and university asks for a personal statement or essay with your application, and this is where you can make yourself stand out the most. “One of the good things was that all those experiences I had behind me made it easy to write an essay about what the skills the military trained me in could offer and why I want to go back to school and just the long arc of my life to that point,” Scranton explains. “There was a lot of material there.”

The essay is also a great way to stand out if you don’t feel that you measure up by the numbers. Vargas, who had a 3.3 GPA in community college, knew that his grades weren’t necessarily up to par for an elite university like Berkeley, but he was able to shine in his application essay.

“The greatest help that I had getting in here was writing that personal statement,” Vargas says. “While I wasn’t a top candidate numbers-wise, I was able to stand out in my essay. That’s where you can explain to them who you are and why you can make their school better as well as how their school can make you better. You can really let them know who you are.”

While following these tips won’t guarantee you a place at Harvard or Yale, they will set you on the right path to getting a higher education.