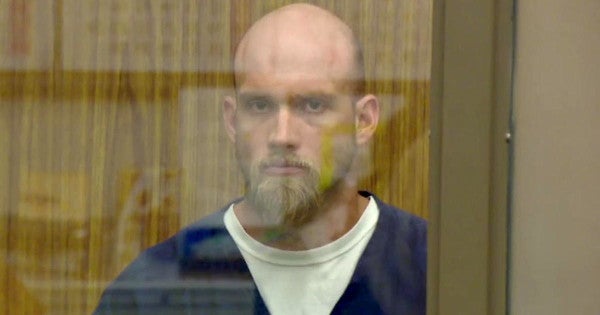 VISTA, Calif. — One night in March 2017, Mikhail Schmidt was looking for a victim. He wanted someone vulnerable, a prosecutor said Wednesday.

And when he saw plumber Jacob Bravo “stumbling drunk” on an Oceanside street, Schmidt “figures out that's his mark, that's what I am looking for,” Deputy District Attorney Cal Logan told a jury in Superior Court.

Schmidt, now on trial in a Vista courtroom, followed Bravo back to a construction-site trailer. As the victim slept in the trailer, Schmidt sneaked inside and stabbed him, the prosecutor said during his opening statement.

When a defense lawyer spoke to the jury in court Wednesday, he didn't dispute outright that Schmidt committed the stabbing, but said the defendant was “was under the clear belief” at the time of the killing that he worked for a secret government agency known as “Orange.”

“Sit with an open mind,” attorney Brad Patton told jurors, “and I will be back to tell you what this all means.”

Schmidt, 33, is charged in Superior Court with murder and a special-circumstance allegation of lying in wait. He faces life in prison without the possibility of parole if convicted.

The prosecutor said Schmidt, a former Marine who'd seen missions in Iraq, told Oceanside police “he missed it, missed the thrill. He'd had the taste of blood in his mouth and he wanted to feel it again.”

The killing was discovered early March 9, 2017, when one of the victim's distraught co-workers called 911 about 5 a.m. and reported finding “blood everywhere” and Bravo dead.

Bravo, 37, lived in the San Bernardino County community of Phelan, but on weekdays stayed in a trailer at his job site, a residential construction project on Windward Way, two blocks from the beach north of the Oceanside Pier.

Investigators suspect Bravo had been asleep when he was stabbed in the kidneys and neck. The knife cut his carotid artery.

The prosecutor told the jury that later that day, Schmidt — a triathlete — confessed to his boss at an Oceanside sporting goods store. The boss's wife called police, who picked up Schmidt.

Logan said the victim's blood was on Schmidt's car door. He told jurors they would see video of Schmidt's nearly four-hour interview with police, during which he said the defendant moved from denial to defensive to a little hostile and then to acceptance.

He said Schmidt told investigators he had been “looking for somebody vulnerable” the night of March 8, 2017.

Bravo was stabbed “just because he (Schmidt) wanted to kill somebody. And he did. And he's guilty,” Logan said.

Schmidt's lawyer told the panel about his client's history of repeated head trauma, from high school football to other accidents, including as a Marine. The defense attorney spoke of Schmidt's MRI findings, traumatic brain injuries, and a psychologist's conclusions of post-traumatic distress order with dissociative features.

After Schmidt's 2013 honorable discharge as a staff sergeant, Patton said, Schmidt was diagnosed with post-traumatic stress disorder. He also “abused alcohol” and had seizures, Patton told the jury.

Patton said Schmidt “believed that while in the Marine Corps, he'd been injected with nanobots,” and believed that was how a secret government agency he called “Orange” communicated with him.

The attorney said the evidence will show no motive, no trigger, and that the morning after the killing, Schmidt thought it had been a dream. But when he drove past the yellow crime scene tape, he realized he had not been dreaming.

Testimony in the trial will continue Thursday.