One Man’s Trash is Another Veteran’s Franchise Treasure 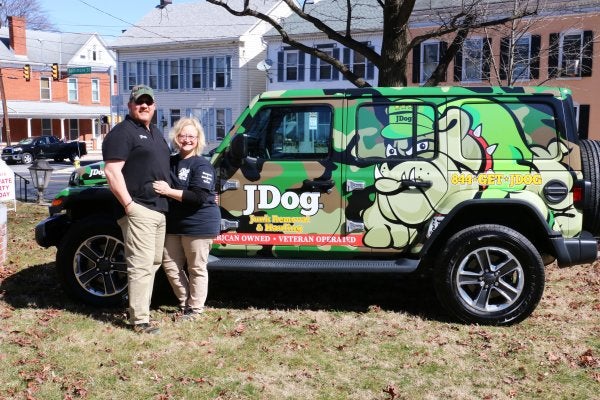 JDog® Junk Removal & Hauling isn't just about hauling junk, their mission is to hire our nation's Veterans, ultimately decreasing the veteran unemployment rate to under 1%.

JDog was founded by Jerry “JDog” Flanagan and his wife, Tracy Flanagan in 2011. The idea was formed out of necessity when the Flanagan's birthday party franchise system was forced to declare bankruptcy during the recession. Unwilling to give up, Jerry Googled 'recession proof businesses'. “The four things that came up were pharmacist, doctor, waste management and junk removal,” Jerry stated in an interview with Forbes. Jerry and Tracy stated marketing in their local community by handwriting note cards advertising their junk removal services. From the kitchen table to a nationally recognized company, JDog went from a way to put food on the table to a franchise system employing countless veterans. One of these veterans is Shawn Stroop who was inspired by JDog's mission to decrease the Veteran unemployment rate.

Shawn Stroop served 23 years in the US Army. After 8 years as a Forward Observer, he received a Green to Gold Scholarship and spent the remainder of his military career as an Intelligence Officer. Throughout his service, Stroop served in Operation Desert Shield, Operation Desert Storm, Operation Joint Endeavor, Operation Iraqi Freedom, supported the Global War on Terror in Africa and deployed to Afghanistan, twice.

Upon leaving the military, Stroop served as a Technical Director for the Air Force as a civilian contractor. “When I retired, I was ready to retire but I wasn't ready to leave the service. After five years with the Air Force, it was time to do something a little different.” One day while on Facebook, Stroop came across an ad for JDog. “I thought it was an interesting concept,” he stated. So he decided to visit the JDog HQ office for a Discovery Day. After meeting with the staff and learning more about Flanagan's mission, he knew it was the right fit for him. “I jumped in very fast; all hands in,” Stroop declared. By early November 2018, Stroop's first franchise JDog Junk Removal & Hauling Hanover was open for business. Less than a year later, Stroop has opened 3 more franchises in South Central PA, as well as five in the Cincinnati area of Ohio, which his brother, Bobby, will run.

Flanagan and Stroop share a passion for JDog and its mission. Here are the 4 reasons why JDog is a great fit for their fellow veterans:

Call 844-GET-JDOG today and find out more about owning a JDog Brands franchise. Attend one of our upcoming Discovery Days and see first-hand why Veterans want to own a JDog franchise.

Stroop was able to leverage the knowledge and experience he gained from his military service to build his business. When he was starting out, it was just him and his wife, Amy running the business. He was able to utilize his background as a Section Sergeant to turn this small team into a great success;

“Running small team operations translated seamlessly to what we were doing. The job we were doing was completely different, but in my mind what a military career does for you is help build flexibility. You're able to learn most things, and you already have the leadership potential to maximize for any business opportunity,” Stroop said.

As Stroop's company grew, so did his reliance on his time in the military.

He explained, “When I was a Company Commander and a Battalion and Brigade Operations Officer, that really helped me understand the scope of managing multiple groups. This translated nicely into owning and running nine different JDog Junk Removal & Hauling territories. You get the scope. The skill sets I learned in the military have absolutely contributed to my success.”

You already know the culture

Unfortunately, many companies do not emulate a culture similar to the military. For this reason, it can be extremely difficult for veterans to transition back into the civilian workforce. JDog is different. They strive to create an environment more suitable for veterans, which focuses on building camaraderie and mutual trust.

“It's inculcated within every JDogger,” Stoops explained. “It already exists in every person that works there whether they're a military family member or a veteran.”

They want you to succeed

There is an immense amount of support from all levels within JDog. Everyone is rooting for your success.

“Corporate encourages that 'Mission Accomplished' mindset,” Stroop said. “There's not a day that I can't call them up and ask them questions. The Franchise Advisory Council is so helpful in working with corporate at large to make sure we're taken care of and taking care of each other.”

This support goes beyond the JDog culture. Franchise owners are not left to fend for themselves – they are given the tools that help to drive the success of their business.

“One thing that veterans understand are orders. When they're given orders, they'll execute. It's not necessarily orders, but a model of how to go out and do this business and they want you to be successful. I think it's why the JDOG brand is key and crucial.”

You'll believe in their mission

JDog Junk Removal & Hauling is much more than a junk removal and hauling franchise, they are mission driven. Stroop recalls explaining why he chose to be in this business to those not familiar with the JDog brand.

“It's because of what our mission is: to get the veteran unemployment rate down to under 1%. At the end of the day, yes, I remove junk. But it's so much bigger than that.”