When a gunman opened fire at a San Diego synagogue, an unarmed Iraq War veteran counterattacked

"I told him I was going to kill him. I yelled it; I used profanities. I kept screaming at him. I was trying to throw him off." 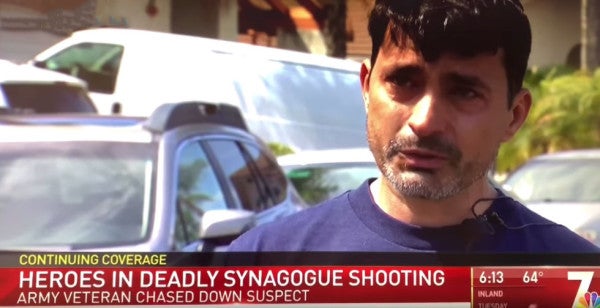 SAN DIEGO — John Timothy Earnest didn't hide his smirks as he sat in a San Diego courtroom on Thursday, watching surveillance video of Lori Gilbert-Kaye being shot down inside the lobby of a Poway synagogue.

Earnest also smiled as a synagogue congregant testified about running toward the shooter, screaming “I'm going to kill you!” and seeing the gunman “with a look of astonishment or fear” turn and run.

Earnest, 20, is facing one count of murder and three counts of attempted murder in the shootings at Chabad of Poway on April 27. He also faces an arson charge related to an Escondido mosque fire in March, when several people who were sleeping inside escaped unharmed.

A preliminary hearing opened Thursday in Superior Court for Presiding Judge Peter Deddeh to listen to the evidence and decide whether it is sufficient to hold the defendant for trial. The hearing is expected to resume on Friday with a final witness, a man who was wounded at the synagogue.

Authorities believe the shootings were prompted by Earnest's hatred of Jews, as expressed in an online “open letter” in which he said Jews were destroying the white race. In the letter, he said he made up his mind to commit the shooting after 51 people were killed and 49 injured in a March 15 suspected white-supremacist shooting at a New Zealand mosque.

At a lunch break in the hearing, Earnest turned partly toward spectators and made a “hang-loose” gesture with one hand, thumb and little finger extended. It wasn't clear who he was looking at, but family members of the woman killed at the synagogue were in court.

Gilbert-Kaye, 60, died of two gunshot wounds that struck the back of her right shoulder and her right buttock, according to a county deputy medical examiner. Dr. Steven Campman testified that the two rounds caused fatal internal injuries, hitting an artery, her lungs, spine and ribs.

He said the round that hit the woman's buttock exited from her abdomen, with shattered fragments entering her left forearm.

Surveillance camera footage of the lobby of the synagogue on Chabad Way was viewed in court. It showed a man firing an assault-style rifle from just outside a front door, hitting Gilbert-Kaye as she turned to run. She fell to the floor at the doors into the sanctuary.

Rabbi Yisroel Goldstein, seen in the video walking through the lobby, was wounded in each hand and lost a finger as a result of the shooting.

A prosecutor said the rabbi and the niece will not be called to testify during the preliminary hearing, but Peretz would testify on Friday through a translator.

Oscar Stewart testified that he had been attending Chabad of Poway for about six months before the April shooting. That day, he was standing in a back corner of the sanctuary as readings from the Torah and blessings were being given to celebrate the last day of Passover. About 45 to 50 people were inside, he said.

Then, he said, he heard four gunshots. His first instinct was to run away from the sound, but within seconds he decided to head toward it.

“I saw men running toward the exit door, people were falling over each other. There was chaos,” Stewart recalled. “I heard screaming from the women's side, and people yelling, 'Get down!'”

Stewart noted that men and women are separated in the synagogue, sitting on opposite sides with a partition between them.

He said he heard more shots as he ran to the lobby. He saw two muzzle flashes, the gunman's final shots. He didn't know where the rounds went, he said. “I was focused on the rifle,” Stewart told Deputy District Attorney Leonard Trinh.

Stewart said he served in the Navy during the 1991 Gulf War and enlisted in the Army in 2001, taking part in the later invasion of Iraq as well as in a subsequent campaign. He estimated he had been in at least 20 shootouts and saw people die while in combat.

He said he saw the synagogue gunman lower the rifle and try to manipulate something.

“I believe he was out of ammunition and he was trying to reload,” Stewart said. “I told him I was going to kill him. I yelled it; I used profanities. I kept screaming at him. I was trying to throw him off.”

He said he understands that gunmen often “come with a plan” and if you distract them, it throws them off their plan.

He recalled that the shooter held the gun at his side, turned and ran toward his car, a gray Honda Civic parked across the street. Stewart ran up to the car and punched it, planning to pull the gunman out of the driver's seat.

Then, however, he said he heard a man behind him yell, “Fall back, I have a gun!” Stewart stood behind the Civic as an off-duty Border Patrolman and member of the congregation, Jonathan Morales, opened fire on the car.

The Civic made a U-Turn in the street and headed for Rancho Bernardo Road while Stewart tried to memorize the license plate number.

“It was the pedal to the metal, it seemed to me,” Stewart said, a comment that brought another smile to Earnest.

Prosecutors played 911 call recordings of a man who identified himself as John Earnest, who told dispatchers, “I just shot up a synagogue.”

The first call rolled in to the California Highway Patrol dispatch center about 11:20 a.m. The dispatcher repeatedly asked Earnest for his location, whether he had a weapon and why he “did it.”

“I'm just trying to defend my nation from the Jewish people,” the caller said. “They're destroying my people.”

The call was transferred to a Sheriff's Department dispatcher, who also asked for Earnest's location. Earnest can be heard giving a sigh at one point when he repeated that he was at West Bernardo Center Drive and Rancho Bernardo Road. He tells the dispatcher he has a gun, “but I'm not going to use it.”

He says, “I opened fire in a synagogue. I think I killed some people. Some man returned fire with a pistol. I got in my car and drove away.”

He also sounded impatient at one point, telling the dispatcher, “I'm stopped. I've been here for a long-ass time.”

San Diego police Officer Jonathan Wiese testified that he heard a radio dispatch regarding shots fired in Rancho Bernardo. He tuned into the Poway sheriff's frequency and heard more details on a shooting, so he sped off in that direction. Going 130 mph, he said, he reached Earnest's car in about 10 minutes.

He said he knew nothing about the people shot at the synagogue, but ordered the driver out of a gray Civic stopped in a traffic lane. The driver got out and followed orders to get on the ground. Wiese said he handcuffed the driver, Earnest, and saw a rifle on the car front seat.

The sheriff's evidence technician testified that she photographed and collected evidence after the shooting. She noted a bullet hole above the driver's window of Earnest's car, presumably from a round fired by the off-duty Border Patrol officer.

On the front seat with the rifle were five magazines holding 10 cartridges apiece, as well as a tactical helmet with a Go-Pro camera mounted on it, a green duffel bag and a manual for the rifle.

Escondido police Detective William Havens testified that he investigated a fire at the Dar-ul-Arqam mosque in Escondido on March 24, about 3:20 a.m. An outside wall was scorched in several places, and Havens said he noticed a chemical odor.

Seven people had been sleeping inside but got out safely and used a fire extinguisher to put out the flames. Havens said security camera video on nearby shops showed a man get out of a dark Honda Civic with a gas can, enter a gate to the mosque, then return to the car and drive away. One video showed a flash of light and smoke before the man returned to his car.

Spray-painted in the mosque parking lot were the words, “For Brenton Tarrant t/pol/.” After the writing was documented, it was cleaned away to not “give the suspect in New Zealand (mosque shootings) any more press than he was already getting,” Havens said.

When detectives found an “open letter” in a folder on Earnest's home computer, it contained a reference to the Tarrant shooting, the mosque arson and Earnest's intention to kill Jews.

A sheriff's homicide detective testified that when he searched the Rancho Penasquitos home Earnest shared with his parents and siblings, he found a state Fish and Wildlife hunting program card noting that Earnest had completed the program on April 13.

That was the same day Earnest bought his Smith & Wesson AR-15 rifle, cartridges and other items from San Diego Guns in Grantville, according to a sales receipt shown in court. The gun cost $729.99.

A forensic evidence technician with the Sheriff's Department said an orange state hunting license was found in Earnest's wallet, good from July 1 this year through June 30 next year.

In California, no one under age 21 may purchase a gun unless they have a valid hunting license. Earnest's hunting license would not have been valid yet when he bought the rifle in April.