Marine Corps veteran and Wisconsin Senate hopeful Kevin Nicholson has been seen as a star candidate for the Wisconsin Republican... 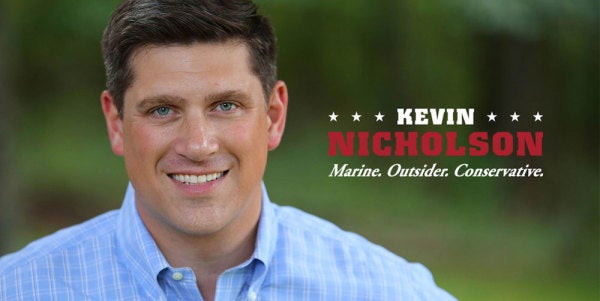 Marine Corps veteran and Wisconsin Senate hopeful Kevin Nicholson has been seen as a star candidate for the Wisconsin Republican Party this election cycle, but he recently came under fire for criticizing veterans who identify as Democrats, claiming that their service contradicts their political views.

In a radio interview on Wisconsin’s “Steve Scaffidi Show” on WTMJ, Nicholson stated that veterans voting for Democrats doesn’t make sense because the democratic party has “rejected the Constitution.”

“Those veterans that are out there in the Democratic Party, I question their cognitive thought process because the bottom line is, they’re signing up to defend the Constitution that their party is continually dragging through the mud,” he said.

Such an assertion is quite on-brand for the Senate candidate. Nicholson told USA Today that his conversion to becoming Republican stems from his experience in combat, becoming a husband and father, and his choice to become a Christian; his status as a decorated veteran and his outsized business acumen certainly attracted the attention of major GOP donors.

Let’s just say this makes Nicholson a bit of a walking contradiction given, well, his own strong history as a former Democrat.

Nicholson was formerly the president of the College Democrats of America while attending the University of Minnesota. At the 2000 convention for the Democratic National Committee, he gave a speech supporting a woman’s right to choose. So why the sudden change?

Perhaps it's not about party or principles with Nicholson. An in-depth report from Politico reveals several people who knew Nicholson during his college days that attest to his clear ambition to hold public office, which reportedly included having an “ARFS1,” or Air Force One vanity plate. Former friends and colleagues note Nicholson’s charismatic and powerful personality, but also question his reasons for running; one former roommate claimed he was emotionally abusive.

But even beyond Nicholson’s own political status, his statement is demonstrably false. Several veterans who are Democrats have successfully served in both the Congress and the military. Sen. Tammy Duckworth and the late Sen. Daniel Inouye both served honorably; the latter volunteered to fight in World War II and received the Medal of Honor. Most recently, Marine Corps veteran and Democrat Conor Lamb won a special election in Pennsylvania this year to be the U.S. Representative for the state’s 18th district.

Look, the factors of being a husband, father, and Christian who has seen combat are not mutually exclusive to being a Republican — or even, really, becoming more conservative. Veterans and Democrats can also be all of these things and still have a lasting and successful impact on this country. If anything, the more diverse perspectives we have, the stronger Congress will be — and this doesn’t mean that the majority should even be veterans anyway.

Being able to draw on multiple experiences and backgrounds to include different religions or professions such as teachers, doctors, and scientists, will provide valuable skill sets and representation for our increasingly diverse population.

Maybe Nicholson is doing what he needs to advance his political career and distance himself from his often-polarizing background. But as a political unknown with a contradictory background, he’s not exactly building confidence into being what we need in Congress right now: House Speaker Paul Ryan recently endorsed his Republican primary opponent.