An excerpt from 'Reign of Terror' by Spencer Ackerman. 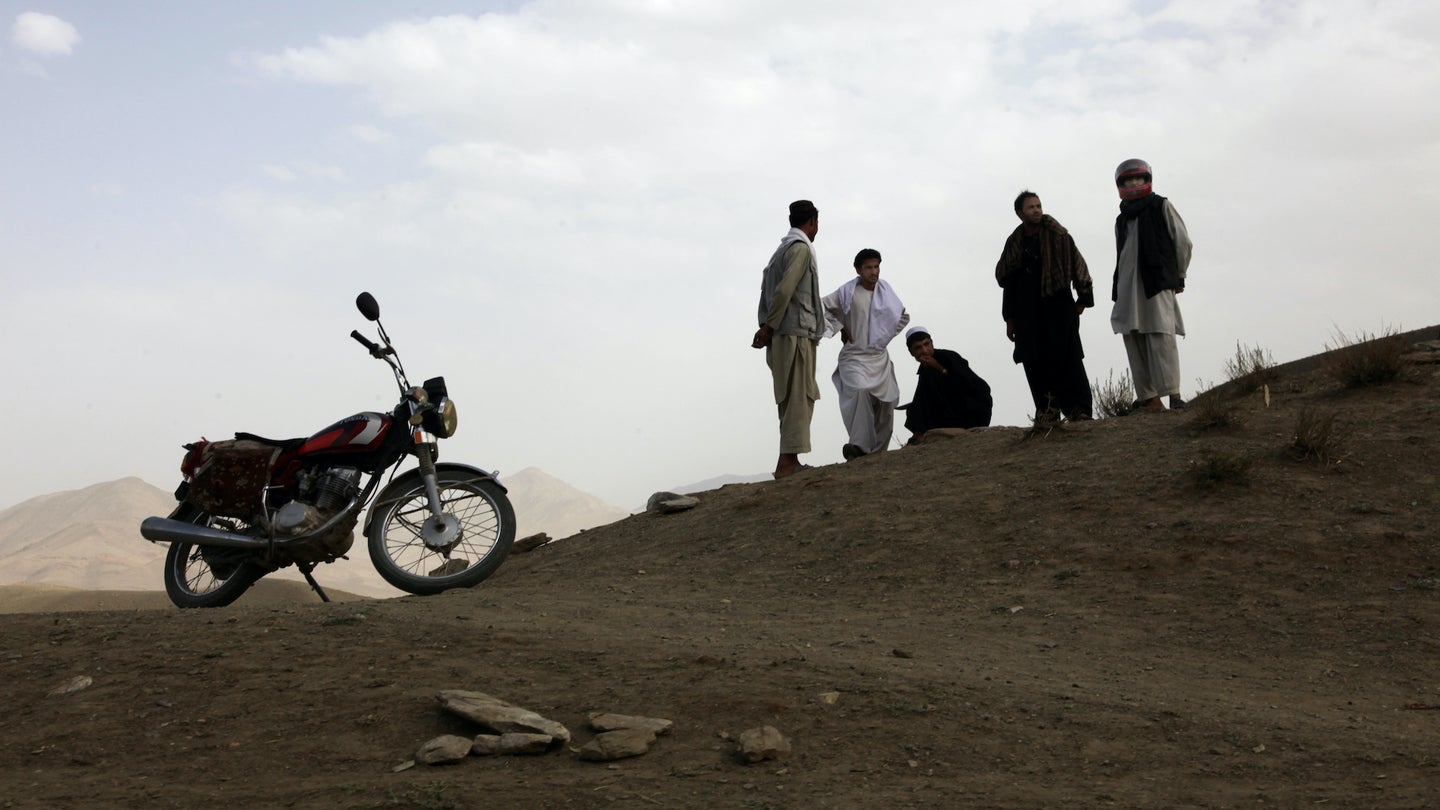 A group of Afghans socialize next to one of their motorcycles near the village of Syahchob, Sayed-Abad District, Wardak province, Afghanistan, Aug. 1, 2010. (U.S. Army/Sgt. Russell Gilchrest)
SHARE

For days Sergeant Rob’s* cavalry troop had fruitlessly hunted a Taliban weapons cache in the eastern Afghan province of Paktia. An informant’s tip brought his platoon, the Hooligans, to a crumbling, sun-baked compound in a town called Spin Sarakalat in pursuit of a man named Dawood who, the informant said, was fencing stolen U.S. equipment. Under rules set by President Hamid Karzai, the Hooligans couldn’t enter the kalat without Afghan escorts, so the local police were first through the door. They quickly brought out thirty-three-year-old Dawood Shadikhan, just three years older than Rob, who had been trying to disguise himself in a woman’s flowing orange and red robes. A half dozen elderly women living in the small compound, their faces dotted with blue stipple tattoos arranged into diamonds, followed the soldiers outside, begging them to let Shadikhan go.

Rob had earlier quieted his soldiers when they complained about bringing along the unreliable Afghan police. A salty, stocky Kansan who liked riding out to Ram Jam’s version of “Black Betty,” Sergeant Rob—that was what his Hooligans called him—said they should suck it up, since unless the Afghans became better soldiers and police, “the mission won’t end.” But now an Afghan cop with a floppy pompadour dyed red was getting too into his job, grabbing a wooden pole and bashing Shadikhan between the shoulder blades. As Shadikhan crumpled to the ground, the women’s wailing swelled. The officer swung around, arcing the pole dangerously close to them, and they sprung back. The eldest among them, tiny and dressed in black, lost her balance, took a nasty fall, and began to cry. The Americans shouted to the cop that it was enough.

As the Americans began to search Shadikhan and assured the women they meant no disrespect, the red-haired cop slipped into the compound and emerged with its maroon-colored motorcycle between his legs. Grinning at the Americans, he revved its engine.

The Hooligans’ lieutenant, N. Blaine Cooper, was getting overwhelmed. He needed the Afghan police to take them to the weapons cache, which Shadikhan claimed the Taliban had moved, before nightfall. Technically, Cooper noted, if the women couldn’t document ownership of the motorcycle, the police could impound it. Sergeant Rob quietly but firmly told Cooper that the police weren’t impounding it; Rockabilly Cop was stealing it. “Look at the situation,” Rob told the young officer.

Cooper, no longer equivocating, yelled to the police that the bike would stay with the women. They indignantly filed back into their trucks and drove off. With no Afghan escort to raid an Afghan home, the Hooligans, with Shadikhan in tow, called it a day. Watching the policemen ride away, Cooper muttered, “If they won’t do it because we won’t let them take a motorcycle . . .” before trailing off, unwilling to follow the implication through. Sergeant Rob had stopped a robbery and saved the women’s motorcycle at the expense of his immediate mission and their relationship with the Afghan police. Alpha Cavalry Troop, 1-61 Cavalry would never get its weapons cache. This was what it meant to do the right thing in the Afghanistan war.

Counterinsurgency, ascendant after the Iraq surge, sometimes dictated that a soldier’s priority was to protect civilians. At other times the priority was to mentor the local security forces, particularly to ward off corruption. At still other times it said a soldier’s priority was to pursue an insurgent and his capabilities relentlessly. Sergeant Rob and the Hooligans found themselves in a circumstance where all three priorities conflicted. It was like that throughout Afghanistan, a Gordian knot of a war. A skeptical Obama, to his ultimate regret, followed the counterinsurgents’ advice. Afghanistan chewed it up and spat it out.

Joe Biden, once Hamid Karzai’s champion and now Obama’s vice president, contended that the right course was to look past Afghanistan, as the Taliban weren’t the issue; al-Qaeda was, and al-Qaeda’s leadership was in Pakistan. Once they decided the Taliban was their problem, then so were the increasingly uncooperative Karzai and the weak Afghan state. Defining the Afghanistan mission narrowly—waging only as much counterterrorism as necessary while throwing money into building Karzai’s forces—was the only way not to become entrenched more deeply into a destitute, unconquered, and unfamiliar country’s problems, which were made even more intractable by U.S. involvement. At the dawn of 2009, with a Taliban insurgency increasingly effective, Biden informed Karzai that he would have to do more with less, starting with an end to his loud criticisms that the Americans were killing Afghan civilians. Pakistan was “fifty times more important” than Afghanistan, Biden told a seething Karzai.

With the exception of the CIA, the Security State and most of the Obama administration arrayed against Biden, there was a large appetite in the military, and particularly from Admiral Mike Mullen, Dempsey’s predecessor as Joint Chiefs chairman, for recommitting to the Afghanistan war through some version of counterinsurgency. Petraeus, now at CENTCOM, considered Biden’s war unviable, since a collapsing Afghanistan wouldn’t tolerate an indifferent American military presence focused on its neighbor. Clinton, now secretary of state, backed Mullen and Petraeus. By March, Obama approved an extant request from the military command in Kabul for twenty-one thousand troops, in part to secure an upcoming presidential election, a move that could have satisfied his campaign pledge to escalate. While Obama said the mission was to “disrupt, dismantle and defeat al-Qaeda in Pakistan and Afghanistan,” he described a meandering path to victory running through Afghanistan. It called for “promot[ing] a more capable and accountable Afghan government,” a goal that required a “dramatic increase in our civilian effort,” extending as far as enlisting agronomists. Michèle Flournoy, the CNAS cofounder who now ran the Pentagon’s policy directorate, described the strategy as “very much a counterinsurgency approach” to a counterterrorism objective. It implied that nation building was necessary for durable counterterrorism, an expansive commitment.

That was not the sort of war that had been waged by the Joint Special Operations Command, the raiders of Zarqawi, but their commander, Stanley McChrystal, took it over in mid-2009. McChrystal’s experience in Iraq sent him searching for an endgame in an endless war, something night raids would never deliver, and he accordingly became more Petraeus than Petraeus. His definition of victory—“a condition where the insurgency no longer threatens the viability of the state”—looked entirely past al-Qaeda. Backed by his fellow generals, McChrystal requested forty thousand more troops, even as the U.S. ambassador in Kabul, the former war commander Karl Eikenberry, called the entire strategy folly. But the Iraq surge established that losing a war only empowered those who wanted to escalate. Obama, granting thirty thousand more troops to generals he now distrusted, extracted from them a promise to deliver results within eighteen months. The discomfited officers, in no position to refuse without under- mining confidence in their strategy, acquiesced. The stage was set for the Afghanistan surge: a campaign none of its factionalized architects fully embraced. In December Obama set “breaking the Taliban’s momentum” as the objective, a purposefully subjective definition that would cover everything short of outright defeat.

It started coming apart from the start.

What passed for a theory of victory—pummeling the Taliban into suing for peace—was frustrated by the war’s tangle of competing interests. Furtive and occasionally farcical diplomacy—the U.S. negotiated with an imposter at one point—had been official policy since September 2010. It sidestepped an outraged Karzai, prompting the Taliban to declare that further talks were off, thanks to the United States’s “ever-changing position.” The most the talks ever yielded was an exchange of five senior members of the Taliban at Guantanamo for army sergeant Bowe Bergdahl, an American deserter who would soon become widely loathed. The gesture had been intended as a confidence-building measure. All the Americans could do now, as the Taliban reconquered more of Afghanistan, was train Afghan soldiers in the hope they could take over the war. Some, in so-called Green-on-Blue attacks, fought the United States instead.

A year after the surge troops came home, Sergeant Rob returned to Afghanistan. Now thirty-five, he was beginning his second tour there, after an army career that began in 1996 when he was seventeen years old and had taken him to Bosnia and twice to Iraq. While on patrol in Pul-e-Alam on November 3, 2013, Rob’s platoon came under small-arms and rocket-propelled grenade attack. He had been scheduled for redeployment home to his wife and three daughters three weeks later. As Sergeant Rob died in eastern Afghanistan, his last words were said to be “Go get ’em, boys.”

*I have obscured his name at the specific request of his family.