During my last week of basic training, several Army Reserve drill sergeants arrived as pinch hitters for our regular instructors,... 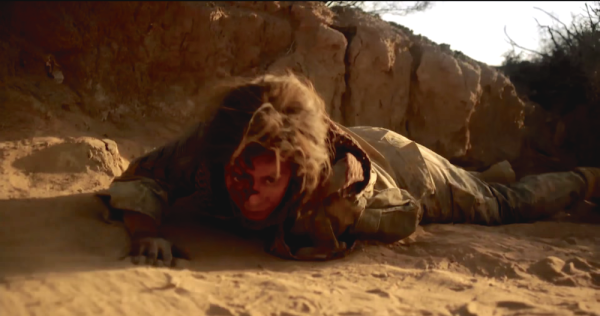 During my last week of basic training, several Army Reserve drill sergeants arrived as pinch hitters for our regular instructors, who by that time probably wanted to kill us all in our sleep. These drill sergeants were slightly less tightly wound than our regular noncommissioned officers, and engaged us in small talk as we cleaned our weapons for hours and hours.

“Be careful,” they warned. “When you get to your first duty station and you go out, you will be highly recognizable. And that will make you a target for people who just want to make money off of soldiers.”

They were right. But the list of people willing to hitch their moneymaking wagon to the veteran support band doesn’t stop at the former command sergeant major offering specialists deals with a 23% interest rate on a Ford Mustang. Now, it includes entertainment media, namely the incoherent conspiracy-drama travesty, American Odyssey, premiering April 5 on NBC.

This series has been preceded with a slick public relations campaign that included soliciting the names of women veterans to be honored at a series of screenings nationwide. NBC has taken to social media to blare its support of #WomenWarriors and publicized the premiere by screening the first episode in 10 cities on March 25 at events specifically honoring female veterans.

After attending the free screening, I can definitely assure NBC that if they wanted to honor and respect women veterans, then they should have involved them in the making of the show as intensely as they did the marketing.

The pilot opens on an infiltration in Mali, meant to closely resemble the operation that resulted in the death of Osama bin Laden. Shortly after the beginning, the point-of-view camerawork resolves into a shot revealing Anna Friel as Sgt. Odelle Ballard.

If you’re a service member watching this show, wondering what it was Hollywood got wrong this time, the answer is everything. Everything is wrong. If you’re a civilian watching this show, wondering how closely this resembles the reality of military service, the answer is nothing in here remotely resembles any reality at all. And lastly, if you’re just a regular person looking for a good television show, I regret to inform you that you, too, will be disappointed.

To begin with, the mark of a good conspiracy is how craftily it is concealed within the layers of the truth. To quote the movie “The Usual Suspects:” “The greatest trick the devil ever pulled was convincing the world he didn’t exist.”

By the end of the first ten minutes of “American Odyssey,” the show reveals the existence of a conspiracy. By the end of the first episode, the audience knows who is involved, who is behind it, and what uniform they wear. All of this information is spewed out haphazardly, with the viewer is left feeling as if the writers threw together a bunch of different conspiracy tropes and stock characters, slapped the “support our troops” label on it, and called it a day. (Also, note to the producers, a document on a computer belonging to today’s global terrorist group being suspicious because it is in English? Not really a thing.) This show is less #WomenWarriors and more #TinFoilHat.

Although Ballard features prominently in the marketing material for “American Odyssey,” ultimately the character is left without much to do. After the fiasco at the compound, wherein they get worked up about some files in English on a computer instead of grabbing it to take along with them and getting off the objective in a rapid manner, she decides to violate noise and light discipline by watching a video of her kids while she heads away from the security of the perimeter to go to the bathroom. After she is captured by some terrorists, her screen time shrinks to short sequences. The action happening back at home appears to become the real focus of the show.

Watch the trailer for “American Odyssey.” Story continues below.

Given the amount of time the show spent setting up the conspiracy in the most obvious way possible, my mind began to drift to those women I know who actually do work in the military branches affiliated with combat arms and special operations. These are women who have been through the psychological operations and civil affairs selection processes, the ones who have served as medics or other non-combat arms personnel in field artillery or other maneuver units, and those who have applied and been accepted into the pre-Ranger program. Without fail, every one of these women lives her life like she has something to prove, and is both mentally and physically fit.

And then we have Ballard, who waits until her teenage captor falls asleep, and instead of taking his AK-47 and cell phone and sneaking out the back, stays until he wakes up and then talks him into helping her. And not to escape, but to join the men’s pilgrimage to Timbuktu. She doesn’t even take out the bullets in his magazine in case her verbal judo is ineffective. Luckily, she is successful in her efforts — most likely because the show’s creators hope that NBC will order a few more episodes — upon which, she undergoes the most orgasmic clothing change sequence ever. Seriously, after watching that sequence, I wanted a cigarette.

Lest you think I’m just picking on the military aspects, this episode couldn’t even get the basics of a television interview correct, filming an entire man-on-the-street type question-and-answer session with the back of the blonde reporter’s head facing the camera. I’d like to meet the cameraperson who had a job after doing that to the stand-up reporter.

Later, a crucial miscommunication occurs when Ballard tries to make a phone call home. The signal rings through to an actual wall phone. One of the people in the house has stopped the receiver with a piece of wood or plastic. She says, “The machine’s not picking up.” Apparently this is a plot device that then allows the boy to tweet a picture to Al Jazeera. I’d like to meet the military spouse, or anyone, who relies on ancient technology to keep in touch with his or her loved ones at any time.

As for Ballard, I couldn’t figure out what she was doing on the mission in the first place. Before the show, I wondered if they would write her as a member of a cultural support team or female engagement team. When the show began with the point-of-view shot and a literal shooting in front of her, I thought maybe she was a medic. Then, as she continued past the wounded man, I considered that perhaps she was an intelligence specialist. Then, I gave up and just wondered why they bothered to write a female character into a special operations forces insertion team unless it was to sell advertising aimed at a very specific demographic.

Currently, with women being given their shots to complete the Marine infantry course, as well as endure the trials of Ranger School, the subject of women in combat is quite timely. Unfortunately, while ignoring these ongoing events, “American Odyssey” also gives no indication if the series is meant to take place in some undefined future where women are fully integrated into all roles in the military. The failure to address this aspect is a huge blind spot that does a disservice to the women who have been, and are, breaking ground every day.

Herein lies my final objection to this television series. When a show like this comes around, it becomes once again apparent that the modern fetishistic worship of the military doesn’t extend to bothering to try to get a story right, or even just to “get it.” Instead, what this series provides is cultural appropriation for profit, couched in a public relations initiative to get support from its military viewers. By claiming to support them first, NBC thus successfully conflates its for-profit campaign with the honorees’ military service. If the show was halfway decent, and such tactics didn’t bother this veteran, I might recommend giving this show a try. But since it wasn’t, and they do, I recommend taking a pass.