“Rob Gronkowski.” Go ahead. Say it to your girlfriend. Even I, a congenital Patriots-hater, must grudgingly admit that Gronk, the... 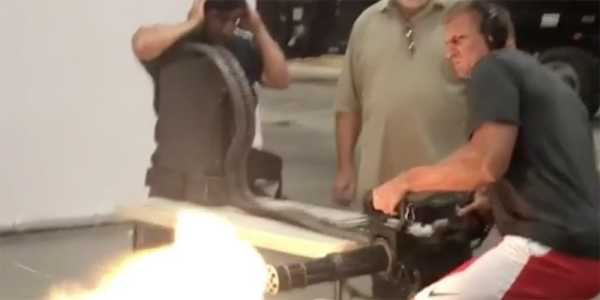 “Rob Gronkowski.” Go ahead. Say it to your girlfriend. Even I, a congenital Patriots-hater, must grudgingly admit that Gronk, the hard-headed, able-bodied tight end, is a tough sumbitch on the field — and a favorite with the ladies.

Why yes, that is Bill Belichick's prime non-Ugg-wearing investment, wielding — dare we say loving? — a rotary cannon, probably the 7.62mm NATO M134 Minigun of Predator fame, hot brass clanging between his legs as he spews hot death from all 22 inches of his barrel.

The occasion — as if he needed one — was Gronk's preparation for a role in the upcoming sci-fi thriller Boss Level, a pet project of writer/director Joe Carnahan, who bravely captured the footage above of New England's favorite large son raining rounds on some poor unsuspecting indoor range target.

No defensive secondaries were injured in the making of this film, but Gronk might want to consider lending the Pats' corners a minigun like that the next time they have to face the Eagles.