Anytime American troops deploy, they’re sure to bring a few effects from home: A photo or two of loved ones, … Continued 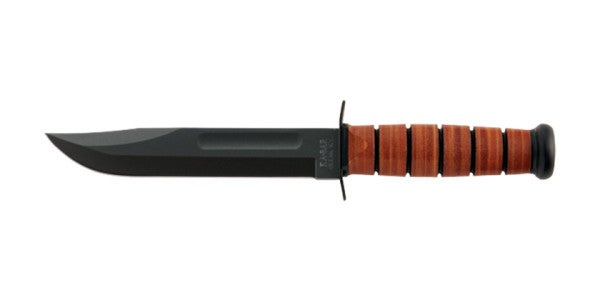 A Marine from the 15th Marine Expeditionary Unit carries a full combat load, as he moves into a security position after seizing Forward Operating Base Rhino in support of Operation Enduring Freedom in Afghanistan on Nov. 25, 2001.U.S. Marine Corps photo by Sgt. Joseph R. Chenelly

The KA-BAR has an almost cult-like following in the military. The company’s knives are steeped in legend, from stories of soldiers and Marines taking out enemies in brutal close-quarters combat, to urban myths about the steel being so strong that wooden shipping crates were sent with KA-BARs instead of crowbars during World War II.

Union Cutlery, and later KA-BAR, knives have seen action in every major U.S. conflict since the company was founded in 1898. At the time, most service members carried their personal effects into battle. So, when American troops shipped off to World War I, many of them left home with their Union Cutlery knives and razors.

“That was where it started on the military side for KA-BAR, really where you could see it take shape,” Joseph Bradley, marketing manager and archivist at KA-BAR, told Task & Purpose in an interview.

Related: The Evolution Of The Combat Boot In The US Military »

Already popular among veterans of World War I and outdoorsmen alike, in 1942, Union Cutlery was one of several companies contracted to create a new kind of knife. Marine Col. John M. Davis and Capt. Howard E. America worked with Union Cutlery to design a new blade for the military.

“So, Captain America was partially responsible for the KA-BAR coming into existence for the U.S. military,” said Bradley.

Officially titled the 1219C2, it’s commonly called the 1217 USMC Fighting Utility Knife and chances are, if someone says he’s used a KA-BAR, this is what he’s referring to.

Unlike the knives used in the trenches of World War I, this new blade was meant to be an all-purpose tool, said Bradley. Troops needed something durable that could do the job of a last-ditch weapon, as well as it could a can-opener or pry-bar.

There were several companies making the blade, but what set the KA-BAR apart was its durability, said Bradley. That, and the fact that each one was stamped “KA-BAR.” Naturally, troops began calling any similar-looking knife a KA-BAR, and over time, the term became just another name for any combat knife.

A Marine in the Pacific during World War II, with a 1217 USMC Fighting Utility Knife strapped to his hip.Photo courtesy of Ka-Bar

World War II was the company’s heyday, with KA-BAR producing more than 20 million knives for the Army, Navy, and Marine Corps. The fighting utility knife was the most popular; though, the company also created a diver's knife, called the Mark I, and an electrician’s knife, which was widely used in the Navy.

In 1952, Union Cutlery officially changed its name to KA-BAR due to the brand’s widespread recognition. The blades were so prolific during the war that production actually dropped off afterward. Surplus knives being reissued to troops in Korea and Vietnam.

A Marine fighting in Hue City during the Vietnam War may have used a knife that saw action at the Chosin Reservoir during the Korean War, and in Europe or the Pacific during World War II.

Marine Sgt. David Weimer in Phu Bai, Vietnam, on April 10, 1967, with a KA-BAR strapped to his flak jacket.Photo courtesy of Ka-Bar

The reason for the knife’s popularity then, and now, is two-fold, explained Bradley. First, there’s the quality. The knife is full tang, which means it’s one piece of steel, and while the leather washers that make up the handle sometimes failed to hold up in the sweltering jungle, the blade itself is tough to break.

“A lot of people think the steel has to be incredibly hard, but the problem with that is that they’re more likely to break than bend, so this knife was designed so it was slightly softer,” said Bradley. “It had some give to it, so it would bend, but you could bend it back. You wouldn’t be out in the field with a broken blade.”

While knife’s quality made it a hit with troops, images of it on every hip and in every hand, made it an iconic symbol of American troops at war.

“The way the military and the war was portrayed, that was front page news,” said Bradley. “These guys were heroes; they were the professional athletes of the time. More often than not, these guys had a KA-BAR strapped to their hip in every one of these pictures. I think that’s really what did it, just seeing it over and over again. I think that was one of the things that solidified it.”

Take the iconic photo of the Iwo Jima flag raising. On the hip of the Marine to the left of the frame is a 1217 USMC Fighting Utility Knife.

It was photos like that that made the KA-BAR synonymous with an entire generation of American soldiers, sailors, airmen, and Marines. From then on, the knife and the company were inextricably linked with the military. Frequent portrayals of service members in film and television killing bad guys with the knife, or sifting through dirt for booby traps, have only cemented the brand’s popularity further.

The relationship between the KA-BAR and the military continues to this day with U.S. troops deploying to new battlefields with their own personal knives in hand. In April 2003, a U.S. Marine climbed up and draped an American flag over the statue of Saddam Hussein in, Baghdad, Iraq. It was an iconic moment from the early days of the Iraq War.

That’s a KA-BAR strapped to his flak jacket.