Over the weekend, Arkansas-based Wilson Combat dropped photos revealing its newest handgun that moves away from the traditional 1911 design... 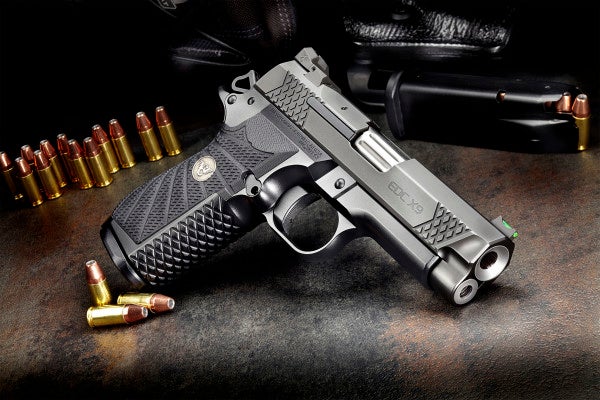 Over the weekend, Arkansas-based Wilson Combat dropped photos revealing its newest handgun that moves away from the traditional 1911 design to incorporate features from more modern designs.

Much like the Hudson H9, Wilson Combat's EDC X9 builds on the 1911's classic features, such as its controls, ergonomics, and much-loved trigger. Few companies are better positioned to recognize the American gun-owners' love of the 1911 than Wilson Combat, having built them for over 30 years. The X9 has retained some of the classic gun's stylistic cues, but abandoned some of the 1911's features including its grip safety, replacing it with an ergonomic fixed beaver tail. Unlike the striker-fired H9, the EDC X9 retains the 1911's single-action, hammer-fired action and manual safety. This will especially appeal to those who favor manual safeties and like to keep their carry pistol cocked and locked.

The X9 is an expansion of Wilson Combat's EDC range of pistols specifically designed for everyday carry. The rest of the EDC range have closely followed the 1911-pattern. The X9 makes a number of pronounced changes that set it apart from the company's earlier products. Perhaps the most important change is the X9's magazine capacity. The X9, chambered in 9x19mm, has a double-stack magazine that moves the new pistol away from the single-stack magazines typical of Wilson combat's other .45 ACP, .38 Super, and 9mm handguns. This required a substantial redesign of the pistol's frame, essentially creating a new weapon.

The X9 has Wilson Combat's new aluminium-alloy X-Frame, which helps reduce the pistol's weight. The X-Frame comes in two options, the traditional profile or with a machined light/laser rail beneath the barrel. The X9 also has what the company describeS as a “tri-top” slide made from carbon steel with the slides profile cut to reduce weight further. Both the slide and grip are aggressively textured with elevation adjustable “Tactical Battlesight” sights and a fiber-optic front sight as standard.

When compared to the industry-standard Glock 19, the X9 stacks up pretty well. While the new pistol is heavier than the Glock, at 35.04 ounces, its aluminium frame and the lightening cuts made to the barrel significantly reduce the pistol's weight. The X9 has the same 15-round magazine capacity as the Glock 19; however, this is a big improvement over the earlier EDC 9 Compact, which has a single-stack 9-round magazine similar to the standard 1911.

Hudson has suggested that the H9 will launch with a manufacturer’s suggested retail price of $1,147. Wilson Combat has confirmed a base price, before in-house customization, of $2,895. This places it near the middle of Wilson Combat's pistol price range. Some of the available customization options include finishes, trigger pull lengths, and an ambidextrous thumb safety for an additional $50.

While not everyone will have nearly $3,000 to drop on a new pistol, Wilson Combat, like many firearms brands, have a dedicated following. The X9 certainly isn't the only double-stack, 9mm, all-metal pistol on the market, but it is an attempt to fill a similar niche as the Hudson H9. Giving the 1911 owner the best of both worlds, combining the familiarity of the 1911 with the capacity of a more modern 9mm pistol. Arguably, the X9 may appeal more to 1911 purists than the more futuristic-looking H9.