This Ridiculous Video May Change Your Mind About Wearing A Kilt

The kilt was made for combat. Before the ceremonial Scottish garment was seen as merely a “skirt for men,” the... 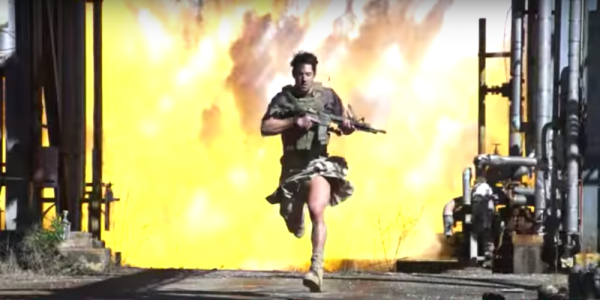 The kilt was made for combat. Before the ceremonial Scottish garment was seen as merely a “skirt for men,” the Tartan fabric wrap was standard military dress among Scottish (and some Irish) regiments as far back as the 16th century, a thick, reliable swath of knitted cloth engineered to defend weary troops against the elements. Even “Mad Jack” Churchill, the British army officer infamous for fighting through World War II with a longbow, bagpipes, and Scottish broadsword, donned his dress kilt during the early days of the Israeli-Palestinian conflict in 1948.

“I grinned like mad from side to side,” he reportedly told his troops afterwards, “as people are less likely to shoot at you if you smile at them … outfit in the middle of the battle, together with my grinning at them, may have made the Arabs laugh because most of them have a sense of humor. Anyway, they didn’t shoot me!”

In an age of Kevlar and the flame-resistant Army combat uniform, it’s hard to see the utility of the traditional kilt outside a little bit of flair at a wedding. But for the warrior who finds pants just too damn constraining, 5.11 Tactical has an elegant solution: the limited edition Tactical Duty Kilt.

While the company envisions this goofy camo miniskirt as a worthy substitute to traditional workout clothes, 5.11 argues that freeing your legs and goodybag from the confines of traditional pants is the best way to give yourself maximum mobility and flexibility — and to channel the spirits of ancient Scottish warriors, we guess.

Don’t take our word for it; just check out the company’s ridiculous ad below:

“For centuries, the bravest, most fit men on earth dominated the battlefield with the kilt,” the company claims. “Now you can bring that excellence to your box.”

Okay, so the ad probably won’t make you want to rush out and buy a kilt, but we’re sure it’ll make you laugh for a solid minute. And who knows: Maybe, as with Churchill, your enemies downrange will laugh long and hard, too — long enough for you to dispatch them in kind.