Elvis’ Gold Pistol Is For Sale?! Thank You. Thank You Very Much

What makes a king? Is it a gaudy crown, a phallic-looking scepter, and generations of inbreeding? Maybe. But if you’re... 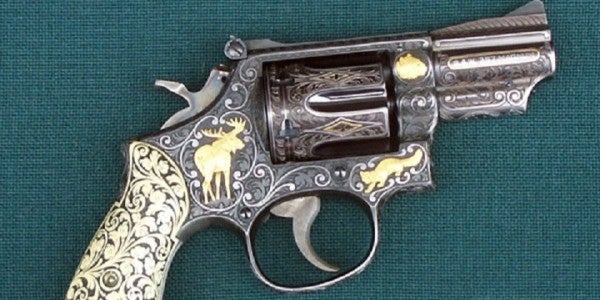 What makes a king? Is it a gaudy crown, a phallic-looking scepter, and generations of inbreeding? Maybe. But if you’re the king of rock and roll, it’s a huge head of hair, popped collars, a crap ton of swagger, and enough money to buy a trove of ornate and gilded pistols, including this crown jewel:

This Smith & Wesson revolver once belonged to Elvis Presley and is currently on sale through Moments in Time, an online retailer based in California that sells historical artifacts, documents, and collectibles.

The pistol was purchased by Presley on Nov. 6, 1970, from Kerr’s Sporting Goods in Beverly Hills, California, according to the website. Adding to the historical value is the fact that it briefly belonged to Vice President Spiro Agnew before he returned it to Presley, who later passed it on to Gene Barksdale, the sheriff of Shelby County, Tennessee. The king had a well-documented interest in law enforcement, and actually received an official sheriff’s badge from Barksdale.

The website describes the revolver as “almost priceless,” which really just means that it costs more than you have. Attempts by Task & Purpose to find out the exact asking price of this kingly weapon failed, as did this writer’s efforts to convince his boss to expense it to the company card.

The handgun comes with all the flair and panache you’d expect from the king of rock and roll. It’s inlaid with gold and silver, and the handles are carved from ivory. Emblazoned across it are five animals: a bear, a bobcat, a moose, a mountain lion, and a puma.

It also comes with a custom-made leather holster with Elvis’ name on it. That way everyone will know that you not only have a really expensive pistol, and when people ask you where you got it, you can just look down modestly. Or you can point to it excitedly and proclaim: “Elvis, baby!”

If you do decide to sell your house, your car, all of your valuables, and make a deal with a loneshark for the rest of the money in order to buy this pistol, just know that you’ll have to give it back to Elvis when he returns from outer space. I’m pretty sure that’s in the fine print.