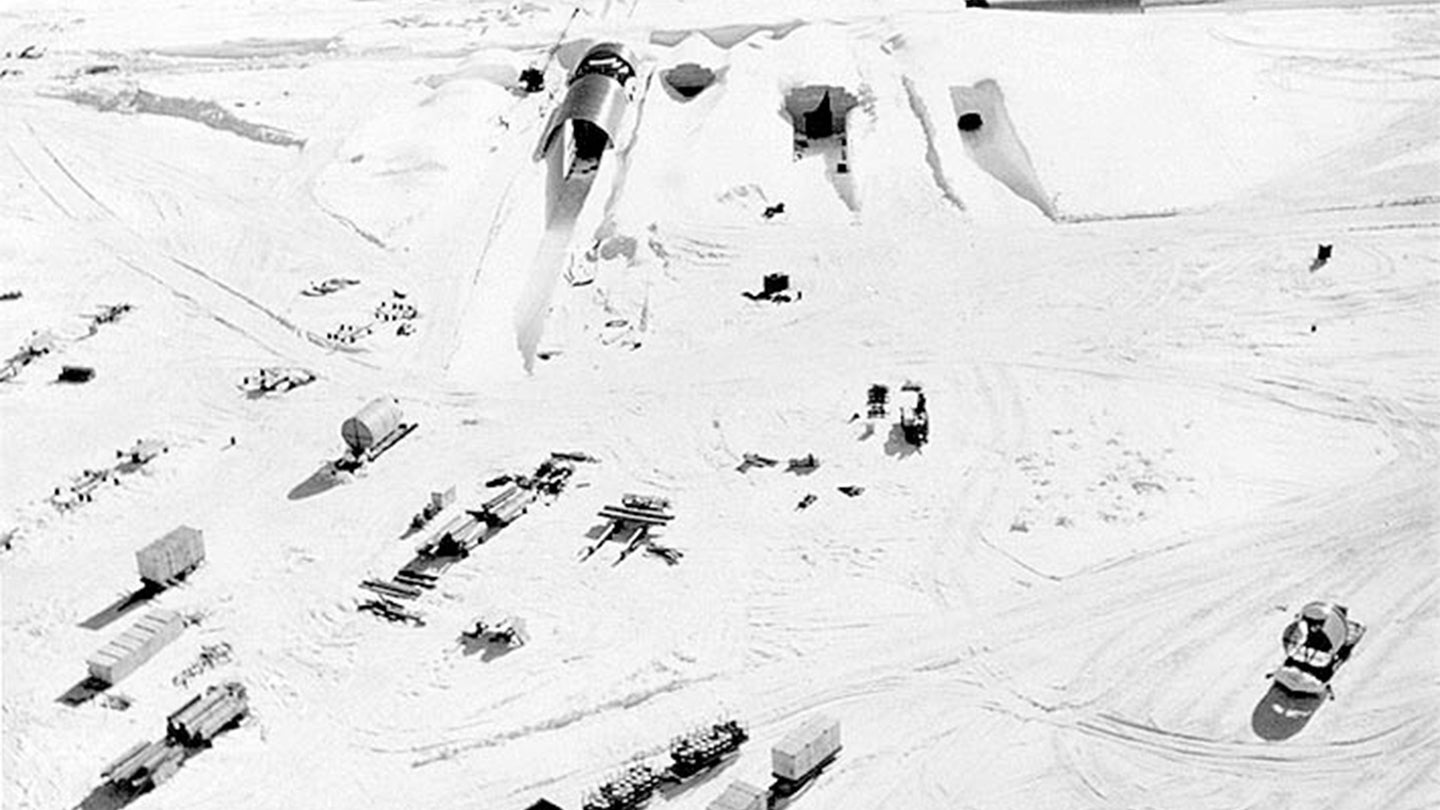 A portable nuclear reactor is prepared for installation at Camp Century, the Army's underground research base in Greenland. (U.S. Army).
SHARE

Almost two miles of tunnels dug deep into the ice of Greenland, space for 200 soldiers and scientists to live and work just 800 miles from the North Pole, all powered by a portable nuclear reactor — this was Camp Century:

Think of it like a real-life Hoth rebel base from Star Wars, without the tauntauns or snowspeeders.

Construction began in June 1959 and was completed in October 1960, and it was an arduous process. The camp was located more than 100 miles inland from Thule Air Base, the nearest point on the Greenland coast where supplies could be delivered. In order to transport thousands of tons of construction materials and equipment to Camp Century, Army engineers had to load everything onto large tracked vehicles called “heavy swings.” With a top speed of two miles per hour, it took these convoys 70 hours to reach the campsite.

The heavy swings also pulled mobile barracks for the soldiers sent to construct Camp Century, complete with steak and potatoes for dinner.

Engineers used Swiss-built snow plows to dig massive trenches in the ice. The largest, dubbed “Main Street,” was more than 1,000 feet long. The trenches were then covered with steel arches and then with more snow.

Once underground, engineers continued expanding the camp, digging additional tunnels that would house everything needed to survive in such rugged conditions. A well was dug deep into the ice to supply fresh water, and escape hatches were installed should the men need to evacuate. In order to combat the ever-shifting ice, everything was to be housed in prefabricated buildings within the tunnels.

By the time construction was complete, the tunnel system extended almost two miles, containing sleeping quarters, scientific laboratories, a mess hall, a hospital, laundry facilities, a recreational hall, a chapel and a barbershop.

To power everything, the Army shipped a portable nuclear reactor to Greenland. All 330 tons of reactor equipment and fuel then had to make the same, 70-hour trip to Camp Century for construction and installation.

Ostensibly, Camp Century was run by the Army’s Polar Research and Development Center and was meant to serve as a scientific research and weather monitoring station. It was well publicized, with reporters from National Geographic and the New York Times invited to see the Army’s city under the ice. The Army even held a contest and invited two boy scouts, one from Kansas and one from Denmark, for a visit.

And while there was some research being conducted there — a 1960 Popular Science article notes that core samples drilled from the ice were already being used to study changing weather patterns — the Army had other plans for Camp Century.

Project Iceworm was a secret project to deploy ballistic missiles under the ice.

If completed, Project Iceworm would have allowed the U.S. military to deploy up to 600 nuclear-equipped and heavily modified Minuteman missiles spread out through 52,000 square miles of tunnels. It would have involved 11,000 personnel living in an underground facility more than three times the size of Denmark.

In theory, it would be a strong deterrent to the Soviet Union, as the missile launch sites would be hidden and well protected against a nuclear strike.

“The missile force is hidden and elusive. It is deployed into an extensive cut‐and‐cover tunnel network in which men and missiles are protected from weather and, to a degree, from enemy attack. The deployment is invulnerable to all but massive attacks and even then most of the force can be launched. Concealment and variability of the deployment pattern are exploited to prevent the enemy from targeting the critical elements of the force,” reads a 1960 planning document.

Ultimately, though, the project was abandoned in 1963. The Air Force and Navy wanted control over America’s nuclear weapons, and the Danish government would not allow nuclear weapons on its soil.

There was also the matter of Mother Nature. Despite the best efforts of Army engineers, it was impossible to stop the constant shifting of the Greenland ice. Camp Century continued to operate as perhaps the Army’s most remote outpost until 1966 when it was closed down. Many of the tunnels soon collapsed, leaving behind few traces of the underground city.

What was left behind, though, was plenty of toxic waste, including 47,000 gallons of radioactive waste that is still buried under the ice. In 2016, scientists reported that warming temperatures in Greenland could begin to melt the ice, which means the dangerous remains of Camp Century could eventually see the light of day.