The Dangerous Perception That Is Hurting The Veterans Community

As the Joni Ernst imbroglio of what is, is not, and what should forever in the future be considered a... 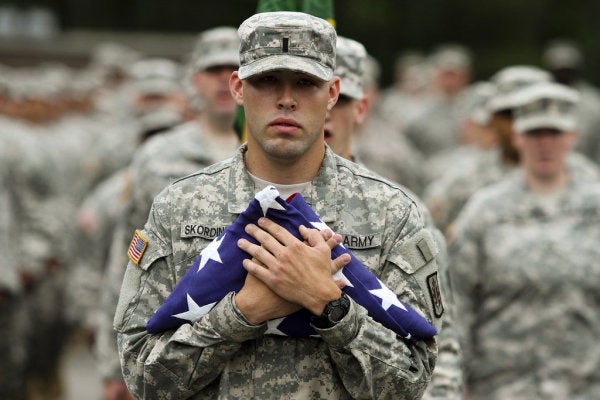 As the Joni Ernst imbroglio of what is, is not, and what should forever in the future be considered a combat veteran comes to a head, we seem to be missing a much larger issue: We, the veterans community, are splicing the value of military service into impossibly small segments of false hierarchical value of what it means to be a veteran.

By all measures, Ernst served admirably and well. She was as a transportation company commander in Iraq at the beginning stages of the war, and then later in Kuwait. She is a serving National Guard lieutenant colonel, and she served in Iraq while combat operations were in progress. She is a veteran and her forceful presence in Congress will be an asset to our community.

What hurts veterans and our public image is when we create these false standards around what is, is not, and should be considered honorable military service whether in combat or not. The value of military service is that you personally made the decision to put aside your own interests for the greater interests of your country, your unit, and your fellow soldiers, airmen, Marines, and sailors. Military service is about serving others before yourself even when that service consists of fueling planes on an aircraft carrier, scrambling 200 eggs for an infantry company just returned from a 12-mile road march, or being the number one man in a stack about to enter a house in an unnamed village in Afghanistan at 2 a.m. The value of all military service matters because it takes everyone in all the branches in all specialties to maintain a military that can effectively protect our country and our national interests.

The debate that is waged across all forms of traditional, digital, and social spheres on when someone can or cannot call him or herself a “combat veteran” damages and confuses the true value of military service. If we apply a yardstick that defined combat service as direct ground combat within small arms range with a seen enemy combatant, then we need to be prepared for what that means. By that definition, thousands of Vietnam, Korea, and World War II veterans rank higher on that mythical combat veteran hierarchy than we ever will.

By focusing solely on combat service, we also miss the value of peacetime service that has played significant role in our armed forces. A great many of the Ranger instructors and Special Forces instructors who taught me how to be a good officer were not combat veterans when I went through Ranger and Special Forces training in the early 1990s. Yet, their teachings for how to create effective operations orders, how to rehearse actions on the objective, and how to analyze terrain, were instrumental to my service in Iraq. Perhaps by definition, they were not all “combat” veterans, but their service was essential to the next generation of military members who went on to serve after Sept. 11.

My step-grandfather was an 8th Air Force World War II veteran. He was a bombardier on B-17s and B-24s that crossed the sky in waves of formations of hundreds and thousands to bomb Nazi Germany into submission. In several letters, he thanked me for my service in Iraq, as one combat veteran to another. If a man who lost several friends to summary executions by the Nazi Waffen SS when as they bailed out of flaming aircraft during the last days of World War II can see my small contributions as effective military service, then today’s veterans need to view our service as universal and not divided into small hierarchies that puts “combat” at the top.