These Veterans Prove That Military Life Can Be A Laughing Matter 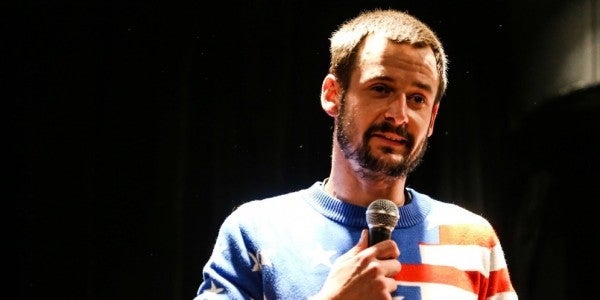 On Nov. 14 in the crowded and dimly lit Dog Tag Bakery in Washington, D.C., Marine veteran Michael Garvey calmly took the stage with his service dog, a Black Labrador named Liberty, and launched into a routine about post-traumatic stress disorder.

Part explanation, part humor, Garvey made his audience, a mix of civilians and veterans, laugh aloud as he described searching on Web MD, an online health site, to find out why he was having flashbacks to his combat tours to Iraq in 2008 and Afghanistan in 2011.

“I found out, that not only am I losing my mind, I’m menopausal,” quipped the 28-year-old. “There is a difference, one is more flashbacks, the other is more hot flashes.”

This was only Garvey’s second time on stage. The first was a week earlier during a show put on by the Armed Services Arts Partnership, a free program that offers art classes and programs to service members and veterans. Garvey is one of 10 veterans who participated in the partnership’s Comedy Bootcamp, a free seven-week course that covers the basics of joke structure, comedic performance, and culminates in two public shows.

The course, now on its third class, is the first of its kind “according to Google,” joked Sam Pressler, one of the program’s founding members, during the stand-up comedy show. There are also plans to see the program expand beyond its current locations in Washington, D.C. and Hampton Roads, Virginia.

“Not only can comedy improve confidence and offer cathartic outlets for our veterans, it's public, thought-provoking nature also serves as a distinct and meaningful way to start conversations, foster understanding, and bridge the gap between civilians and veterans,” said Pressler in an email to Task & Purpose.

“I’d been too scared to try it on stage, but then I saw the class and things normally feel safer in a group, especially a whole group of veterans,” Garvey told Task & Purpose regarding his decision to take the course, adding that humor allowed him to relax and speak more freely. “I think about it a lot and it comes up a lot. I think it’s easier for me to talk about things if there’s jokes in there, because it loosens up the other person, it loosens me up.”

A large portion of the class involves joke writing and feedback from the group, which as it turns out can be mixed blessing, Margot Beausey, a Navy veteran and former surface warfare officer, explained in an interview with Task & Purpose.

“If you’re onstage and people don’t laugh, you don’t know why, but if you’re in a smaller group and you tell your joke you can get some more direct feedback,” she said, but added that it could be a challenge because it was like giving and receiving feedback from your friends.

Of her military service, Beausey said that it “colors” how she looks at the world and added that her time in the military, especially during long hours standing watch, helped hone her stand-up skills.

Additionally, military humor can be a bit rough, to say the least, and often results in thick skins and jokes that push boundaries.

“I think the military is a place where people talk a lot about race and gender, and maybe less so in the regular civilian world. Those topics are really taboo,” said Beausey.

For veterans like Garvey and Beausey, and for the audience at large, their stand-up performance illustrated how humor, which can sometimes be used to blunt insults or deflect from an uncomfortable topic, can instead be used to address, explain, and diffuse the tension surrounding certain taboo topics.

In Garvey’s case, he uses his wit to address issues like post-traumatic stress disorder and combat.

“I can talk about being shot and people will laugh at me instead of just stare at me and say, ‘That’s just terrible.’ I prefer a lighter environment.” said Garvey, who referenced being wounded in combat in 2011 during his routine. “I know I have jokes about PTSD and I can make you laugh while explaining what I go through.”

Watch the highlights from the show, below.