The locks can be picked up at VA sites, and have the Military/Veterans Crisis Line contact information on them. 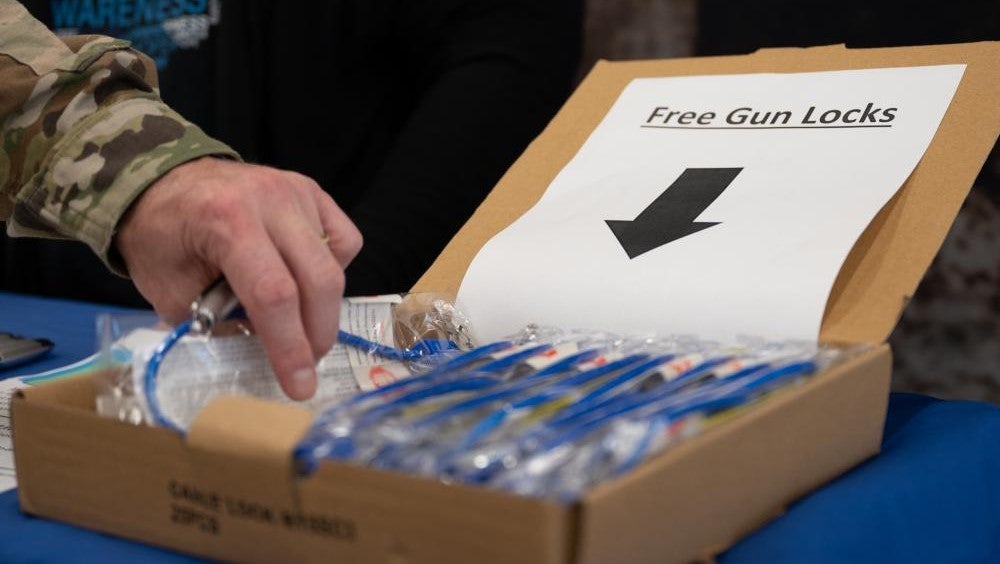 The Department of the Navy and the VA are distributing gun locks to prevent active-duty suicides. The Air Force has also distributed gun locks, as seen here. (Jerry Saslav/Air Force).
SHARE

The Department of Veterans Affairs is stepping up efforts to prevent suicides among service members. The VA and Department of the Navy announced this past week they shipped out 200,000 gun locks to U.S. Navy and Marine Corps installations, in the hopes that they can add an additional barrier to stop active-duty sailors and Marines from killing themselves.

The Department of the Navy’s Office of Force Resilience is overseeing the distribution. The gun locks can be found and picked up at every VA facility, as well as Fleet and Family Support Centers and Marine Corps Community Services spaces.

Both the Navy and the VA said that although having a gun isn’t a sign one would commit suicide, it is a high risk for sailors and Marines, and safely locking a firearm can be one of the best tools to prevent harm.

“Firearms are one of the most lethal and common method for suicide among service members and their families,” Dr. Matthew Miller, the director of the VA’s efforts, said in a statement on the program.

The gun locks also have information on them directing people to the Military/Veterans Crisis Line, the specialized part of the National Suicide Prevention Lifeline that can speak to aspects of military life. The idea, according to Andrea N. Goldstein, acting director of the Office of Force Resilience, is that since suicides are often impulsive, making it harder to access a firearm can help stop sailors and Marines from taking their own lives and make it easier for their to be interventions to help those in need.

“Everyone plays a role in preventing suicide,” Goldstein said. “In addition to safely storing firearms and other lethal means, we can protect our families and friends by listening, providing an open and supportive environment, and connecting them to local resources.”

Low morale has been a concern among the Navy. One sailor is confirmed to have died by suicide on the USS George Washington in the last year; multiple other deaths are still being investigated. Meanwhile a 2019 audit by the Navy found that the department had also been failing to share the Military/Veterans Crisis Line in its online site.

Suicide has been an ongoing issue among the armed forces, across the branches. Last year the Army saw one of its highest rates of suicide. In March, Army Maj. Gen. Jo Clyborne pleaded with soldiers to safely store and lock guns to help prevent them from taking their lives.