Army general shares emotional plea with soldiers: I want to talk to you, ‘not attend your funeral’ 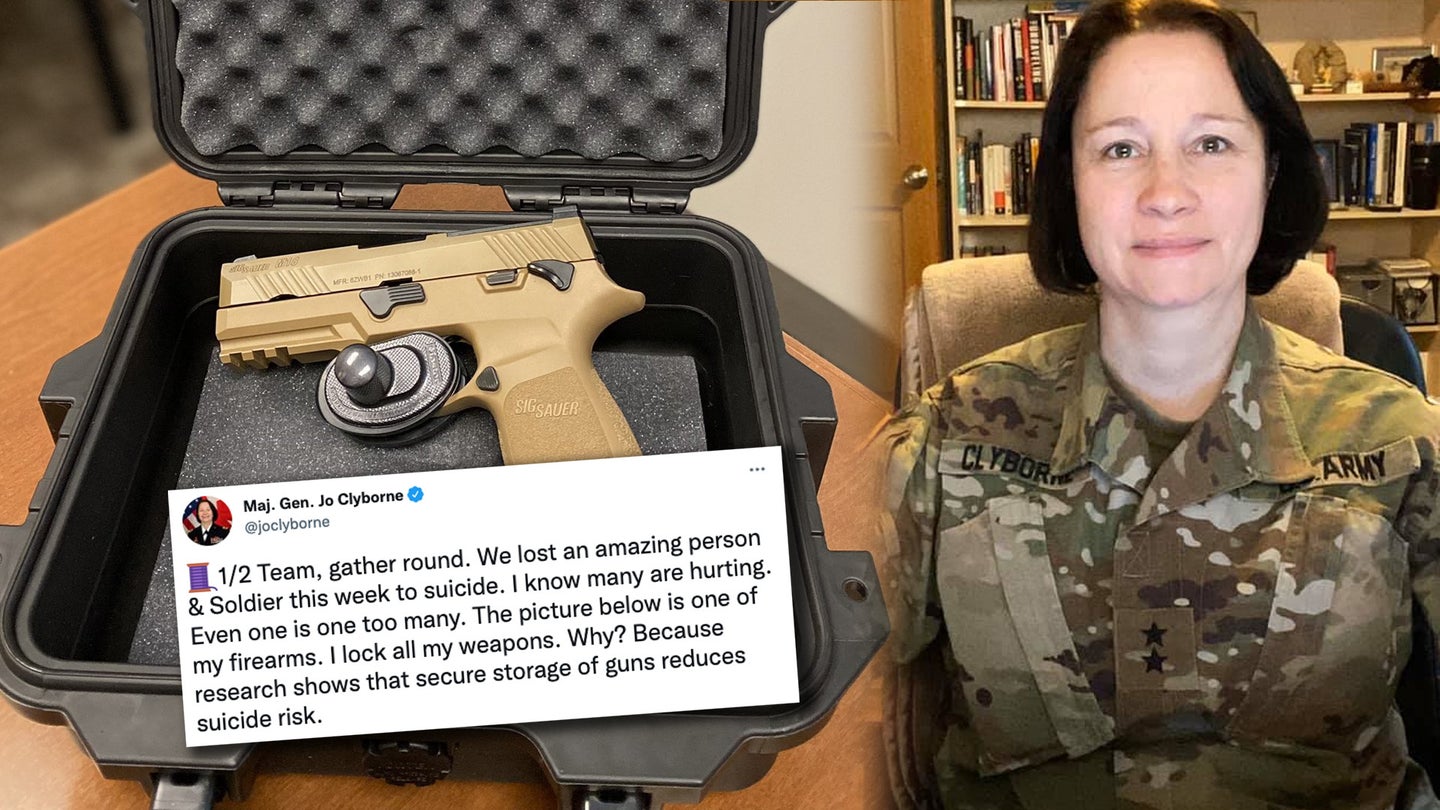 An Army two-star general urged soldiers over the weekend to securely store their firearms after she said another “amazing person [and] soldier” was lost to suicide last week.

“Secure storage means storing all of your guns unloaded & secured such as locked [with] a cable or trigger lock, or in a gun safe,” tweeted Maj. Gen. Jo Clyborne, assistant adjutant general for the Minnesota National Guard and deputy commander of the Army’s Cyber Center of Excellence. “Please secure your firearms. I want to be able to talk to you, not attend your funeral.”

Safe weapons storage has been a critical point when leaders talk about preventing suicide in the ranks, a devastating problem  that has only worsened in recent years. In 2020, the suicide rate increased across every service, so far that Defense One reported it reached “the highest rate since the Pentagon began keeping detailed records in 2008.” A study released last October showed that four times more service members have died by suicide since Sept. 11, 2001, than have died in combat in the post-9/11 wars.

There have been no shortage of studies and programs and initiatives that have atttempted  to address suicide over the years, but military leaders still seem to be at somewhat of a loss when it comes to decreasing the numbers.

“We just haven’t been able to change the trajectory,” Army Chief of Staff Gen. James McConville told Task & Purpose last year. “We’re doing everything we can, I think as an organization to try to build cohesive teams, the fact that young men and women are connected. We think there’s something there. We know what makes people more high-risk. Got a bad relationship, but a lot of people had bad relationships. Or people have trouble with financial matters, but a lot of people have trouble. Or people that are going through some type of administrative or UCMJ process may be at higher risk, but a lot of people are. So how do we identify those folks? How do we get them the right care, and then how do we let them go on with their lives?”

At the Association of the U.S. Army’s annual meeting last year, Dr. James Helis, the director of the Army Resiliency Directorate, addressed safe weapons storage specifically as a way to combat suicide. Helis mentioned both safe storage within a soldier’s home, as well as “means transference,” which is when someone might offer to safeguard another person’s firearm for a few days if that person is having suicidal thoughts. But in order to know that, Helis said, soldiers need to be comfortable having uncomfortable conversations.

“It is absolutely appropriate to ask somebody the question, ‘Are you thinking about hurting yourself?’ And you just ask them that candidly, and that bluntly. Asking the question and pressing the issue is not going to drive the person to attempt to take their own life,” Helis said.

Not having access to a weapon does not typically result in someone going out to “find another means to attempt suicide,” Helis said. Clyborne, who was commissioned in June 1992, echoed that finding in her tweets on Saturday, saying she locks “all my weapons” because “research shows that secure storage of guns reduces suicide risk.”

Clyborne’s tweets directly addressing suicide are similar to that from another general officer, Air Force Gen. Mike Minihan, who was praised in January when he shared a photo of his calendar showing that he was scheduled for a mental health appointment.

“Mental health is simply health,” Minihan later told Task & Purpose. “There can be no stigma in my headquarters, command, or family. Warrior Heart is leadership. Warrior Heart is fine tuning mind, body, and craft to ensure individual and team readiness. It’s a wingman and warfighting imperative necessary to win.”

Research has shown that if someone is thinking about hurting themselves, putting time between the moment they have that thought, and the moment they are able to reach a firearm, is paramount, Helis said. Whether that means the firearm is with a trusted friend or leader instead of in their home, or if the firearm is locked securely in a gun safe.

“We have found that if you can put time between the ideation and the means, that that can actually reduce suicide,” Helis said. “We have that from behavioral health studies, we have that from survivor studies. So even putting the time in between ‘I’ve decided I want to take my own life,’ and the time it takes to get to the gun safe, unlock the safe, get the weapon out, get the ammunition and load it — that number of minutes can save a life.”