In the field, the act of picking over a box Meals Ready-to-Eat is a ritual of sorts. Called rat-fucking — … Continued 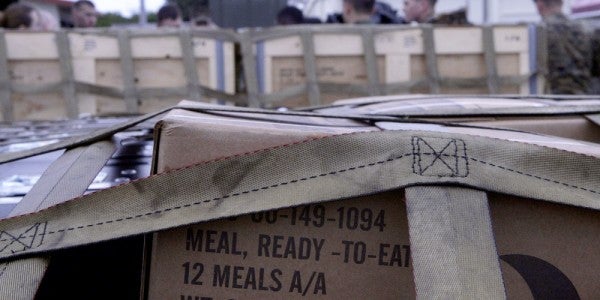 In the field, the act of picking over a box Meals Ready-to-Eat is a ritual of sorts. Called rat-fucking — nobody knows why — troops raid unguarded boxes of MREs, ripping open individual meals and pilfering Skittles, buffalo chicken, and jalapeno cheese spread.

Fortunately, 2017 will be different, with an updated MRE menu featuring a host of new meals and the removal of a few tired staples: Pork rib, chicken pesto pasta, fried rice, turkey nuggets, raisin nut mix, fudge brownies, Ranger bars (knock-off protein bars), and wheat snack bread — which has the texture of soggy cardboard and smells faintly of shattered dreams and yeast — are all getting the axe.

Related: A Survival Guide To The Best And Worst MREs »

The new batch of MREs will include a chicken burrito bowl entree, a honey wheat bagel, trail mix, and teriyaki meat sticks.

The burrito bowl will come in a pouch similar to the tuna entree, and will include a mix of rice, chicken, chili peppers, and beans. Be warned though, the military often goes for the lowest bidder, so expect this burrito bowl to wreak twice as much havoc on your digestive track as any Chipotle burrito. The burrito bowl MRE will also have a trail mix containing pretzels, peanuts, cashews, and almonds, and a teriyaki meat stick, as an alternative to beef jerky. Which is courteous, because you’ll probably need some fiber.

“Typically, when we do evaluations, we get feedback from the war fighter that they want to have more beef jerky varieties,” said Julie Smith, a senior food technologist at the Army’s Combat Feeding Directorate, told Army Times. “It’s such a high sodium item, however, that we have to be careful in how to include it in the menu.”

Production of the chicken burrito bowl, or MRE No. 38, will begin in January 2017, with assembly beginning in February or March. The much-anticipated pepperoni pizza MRE is still in the works, and currently slated for 2018.