No one was hurt but least 11 of the structures were destroyed. 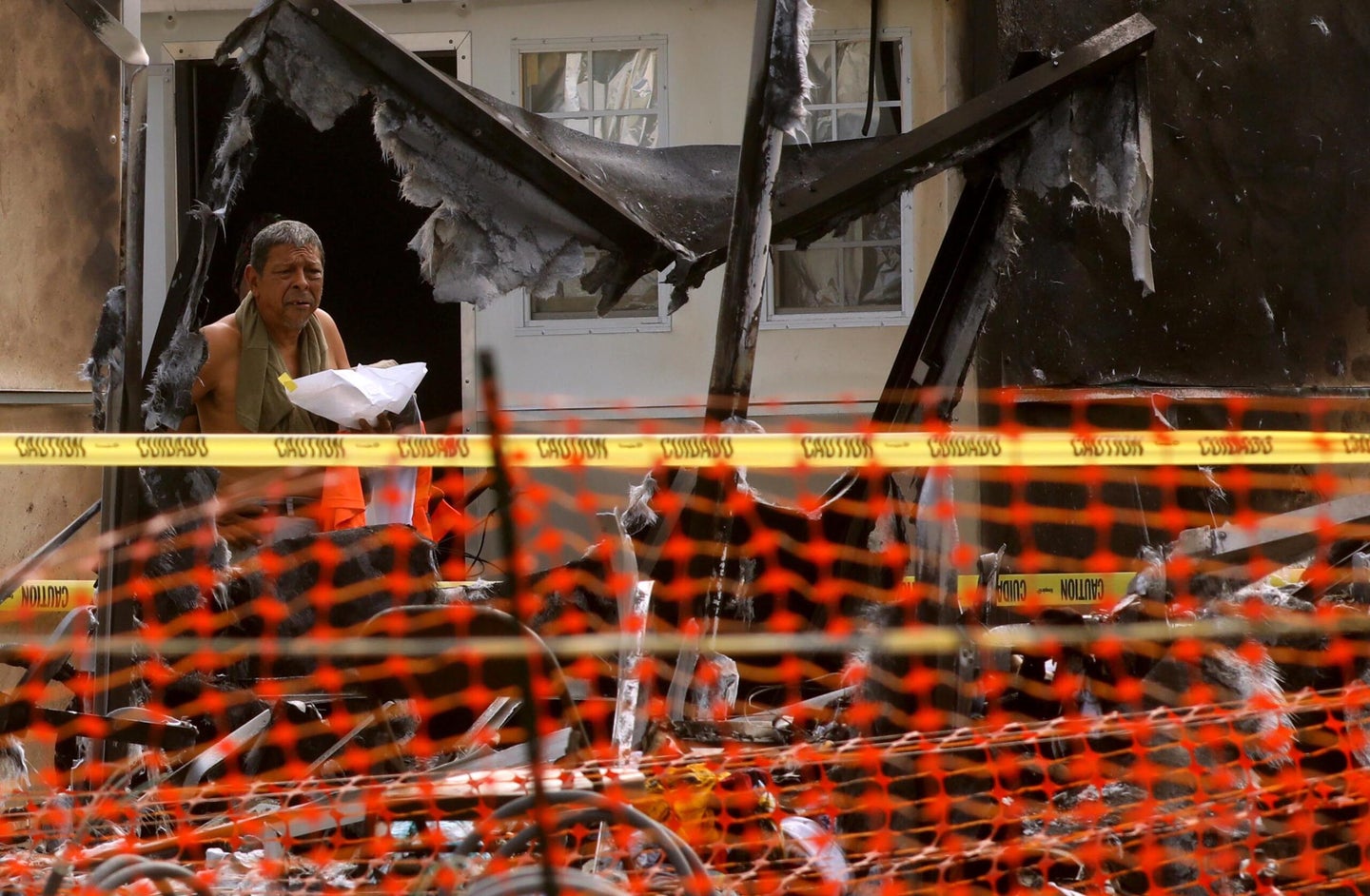 A man looks over some of the tiny home shelters that were damaged or destroyed in a fire Friday morning on the West Los Angeles Veterans Affairs campus on September 9, 2022. (Genaro Molina / Los Angeles Times via Getty Images).
SHARE

Just after midnight on Friday a fire broke out at the West Los Angeles Veterans Affairs campus. The Sept. 9 fire tore through the group of small homes on the campus that shelter unhoused veterans.

No one was injured in the blaze. However 11 of the tiny homes were completely destroyed and at least four others received “collateral damage” from the fire, Capt. Erik Scott, a public information officer for LAFD, told Task & Purpose. The department determined the fire was caused accidentally after a lithium battery overheated while being charged inside one of the shelter units. Once sparked, the fire quickly spread to other structures.

The VA campus, deeded in 1888 to the federal government to care for veterans is home to 140 tiny homes, essentially 8 foot-by-8 foot sheds with climate control and beds for unhoused people to shelter in. The shelter village was set up by the VA in November 2021, to get unhoused veterans who were camping on a street bordering the campus that became known as “Veterans Row.” That camp was cleared that month. Some of the homes came from private donors, including former California Gov. Arnold Schwarzenegger, who donated 25 to the campus. The VA is working on updating empty, older buildings on the campus to house veterans.

A report by Knock LA found that 30 of those 140 tiny home units were vacant. Other tiny home villages in Los Angeles, set up by the city government, operate at or near capacity. The West L.A. VA site had previously flooded, Knock LA found.

LAFD put the total loss at $160,000, with $50,000 of that being the contents and personal belongings inside of the structures. Knock LA reported that veterans living in the units found provided fire extinguishers ineffective at stopping or containing the blaze. The fire department was able to quickly put out the flames upon arrival.

This year’s Los Angeles homeless count was released on Sept. 8 and found that there are 3,456 unhoused veterans in the County of Los Angeles, a 6 percent drop over 2020. The point-in-time count, conducted over three days in February, was the first since January 2020, due to the COVID-19 pandemic. 735 of those are sheltered, in spaces such as the West L.A. VA.

Tiny homes have become a popular shelter option around the United States in places where there are deficits in needed permanent housing, in part because the spaces are relatively cheap, individual shelters for people. In Los Angeles, the city government has set up several of its own tiny home villages since the start of the COVID-19 pandemic in 2020. They are, according to the Los Angeles Homeless Services Authority, partly why the number of sheltered unhoused Angelenos went up in 2022 over 2020. Being placed in a tiny home does not, however, count as getting someone out of homelessness.

The West LA VA fire is not the first to tear through a tiny home village. The shelter units, made by the Seattle-based Pallet, have gone up in flames in incidents in Santa Rosa, Banning, and Oakland, California.

It is not clear where the displaced veterans will shelter now. LAFD told Task & Purpose that the American Red Cross was called to the campus to assist those in need.