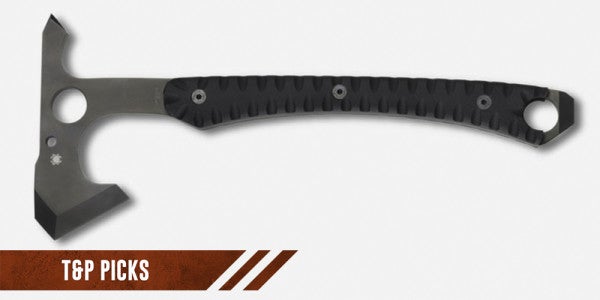 There are plenty of fine-lookin' blades out there in the world of tactical gear, but there's one thing that distinguishes Marine Corps veteran-turned-renowned bladesmith Laci Szabo's distinctive weapons: a focus on ergonomics, on making each tool as efficient as humanly possible.

“I want my weapons to be the extension of the arm or to deliver the maximum power with minimum effort,” Szabo said in an interview way back in 2009, early into his collaboration with knifemaker Spyderco. “You lose fine motor skills in a fight — my weapons do not require a user's manual, they just fall into place when you pick them up.”

Case in point: the titular SzaboHawk and brand-new Warrior Hawk from Spyderco, slick modern tomahawks forged from .300-inch D2 tool steel that both prove appealing alternatives to other hand axes.

While both axes are remarkably lightweight, the original SzaboHawk's curved handle “places its center of balance approximately midway along its length, making it faster in the hand than conventional head-heavy designs,” in the company's telling.