The general, who last year retired his post as commander of U.S. Central Command and finished a remarkable career of... 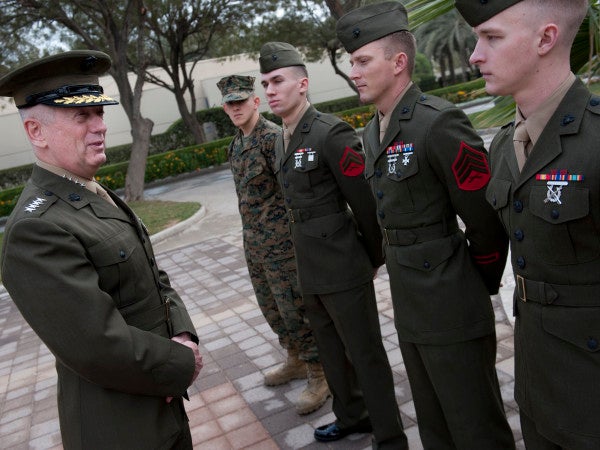 The general, who last year retired his post as commander of U.S. Central Command and finished a remarkable career of military service, is well known for his no-nonsense brand of rhetoric. He’s a tough-talking brilliant military tactician who has few peers in American history.

His hour long speech last week was great, and many have covered his remarks on post-traumatic stress where he said that veterans were not victims.

It’s an important message, but I was struck by something else Mattis said, about the next great generation of modern military veterans.

“And here I speak directly to the combat veterans of our current wars in Iraq and Afghanistan,” he began.

On what makes veterans stand out among this generation:

“All volunteers, all volunteers, you look past the hot political rhetoric swirling around these little understood wars and you rallied to the flag. You signed blank checks payable with your lives to the American people. And for the first major war in our history, our nation fought without a draft. Unlike the Civil War, unlike World War I, unlike World War II, unlike Korea, unlike Vietnam — a draft that pushed me into the military — you, the volunteers of this war, are the element of this generation that is demonstrably, that is demonstrably great, shown not by your words, but by your actions.”

On the commitment shouldered by veterans and their families:

On how modern vets stack up with American military history:

On fighting for the man next to you, and the purpose veterans bring home:

“Second, in our personal commitment, we fought to bring each other home. And our comrades spirits, be they living or dead, their spirits live on in each of us. And bring a noble purpose to our lives, those of us who are lucky enough to get this bonus of another day. And to our final days that purpose is never to be forgotten. Physically or spiritually, we did bring each other home, and we want no pity. For you veterans of this war whose ethical and total commitment represent everything that is great about our country, our country is stronger thanks to your commitment and your blood, sweat, and tears.”

On the meaning of service for modern combat veterans:

“For you veterans who shared what Civil War infantry officer and Supreme Court Justice Oliver Wendell Holmes Jr. called the ‘incommunicable experience of war,’ you must know that your example is the meaning of your service and of the time that you spent fighting overseas, that your impact on the lives of others will continue to resonate, because your comrades and your shipmates will not die in our hearts.”

Watch that portion of his remarks below: