What Is The Infantry Part I: Black Magic and Voodoo

I wrote the “What is the infantry” series back in those heady days of the summer of 2013, when the... 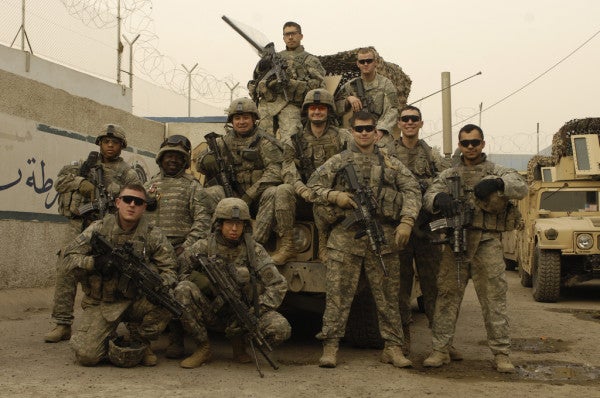 I wrote the “What is the infantry” series back in those heady days of the summer of 2013, when the topic of women in the infantry was hot. Since having rejoined the Army in 2011, it has been the topic du jour, easy banter while sitting on rucksacks after a field problem waiting for trucks, or a thing to get enraged about over on Twitter late on a Friday night. The chatter has calmed down now with women having successfully completed the United States Marine Corps infantry course (enlisted), although there are still spurts here and there, like when 2nd Lt. Sage Santangelo penned an op-ed in the Washington Post arguing she (and others) should be allowed to retake the course. Just yesterday, Iraq and Afghanistan veteran Tessa Poppe addressed the topic here on Task & Purpose.

Over the past couple of years, way too much has been written on the subject that moved the conversation nowhere, and my three essays on the subject served as my own wild attempt to launch a spear and land it somewhere different. The topic of women in the infantry has been approached from every angle — physical, emotional, spiritual, gastrointestinal — but little has been written from the other side, defining, or trying to define, what it actually means when we say “infantry.” That is, what is the thing we are talking about that we (as in, they) are so against women being a part of?

I’ve been in and around the infantry for over a decade, but somehow have remained low enough to the ground to still speak some level of truth without it being too tainted by years of staff work. This, and I’ve had ample time away from the force to reflect.

Writing these posts was fun and rewarding. For months, I received emails from strangers — from curious fans of the blog to senior officers at the Pentagon — who all wanted to tell me this thing or that on the subject.

Reading over these posts today, I think they stand. They are approaching their anniversary, and although I think that spear launch may have been a little wobbly, it landed just about where I thought it would — somewhere dark and true.

I hope that with reposting this series on Task & Purpose, a larger audience might take a look.

These posts have been lightly edited to bring them up to date. To read them in their original form, go here.

Last year, two young lieutenants wrote an article in the Marine Corps Gazette titled “Let Us Fight For You: The Moral Imperative of a Masculine Infantry.” They argue that women should not be allowed in the infantry for a bunch of reasons, most of them — as scholar Adam Elkus points out on the now defunct blog Abu Muqawama — unscientific. To make their case, the lieutenants cite their personal experience in training and in combat, and also God. They’re careful to point out that while they are only junior officers and it is not their role to decide policy like this, they offer insights as only someone who has done the deed can.

I love young infantry lieutenants because they are so brazen. Most of that comes from the fierce training they go through before they get to their first unit. Then, if they’re lucky, they deploy to the combat zone. In two years time they’re back in America, pissed off at the world and confident because they saw the white elephant and lived to tell about it. With all that hate and energy they write pieces like this, and I’m glad they do. It’s good for them to get it out.

But I’m sorry, young lieutenants, if you’re going to make the men as protector argument (which they did), how can you not cite the testimony of retired Col. John Ripley, a fellow Marine who saw significantly more combat and infantry life than any of us? Twenty years ago, Ripley did it better when the topic of women in combat emerged in the days of the first Gulf War.

Back to present day, under the headline “A Man’s Place,” the young lieutenants write: “The question looming, hidden and afraid in masculine hearts, as this discussion rages, is nearly impossible to ask: Where now does a man go to prove his manhood in society?”

I came back into the Army and back into the infantry just as this discussion was getting hot. It became the topic of the day. Rumors swirled that “the next class” would be the first to have women infantry candidates. Guys swore that they saw a bunch of women getting off a bus and inprocessing, while others said they heard from a guy who works at “headquarters” that there were some going through a pre-infantry course right now.

Guys got worked up and pissed. It was, if nothing else, a fun way to pass the time between infantry things.

At home, the conversation continued online. Nasty blogs, mean-spirited tweets, and full on editorial pieces slung around the Internet at the speed of light, all thrashing against something that wasn’t even happening (yet).

Through all of those conversations, I don’t think I ever met another infantryman (still serving) who thinks women should be allowed in the infantry. When I stopped to think about it, that fact spoke to something, and I think it is this: Behind all of the pseudo-science and references to traditional moral values, infantrymen everywhere want to protect the “last all-boys club.”

In the all-male infantry, social dynamics change when a woman enters the room. Conversations shift and there’s instantly a slightly below-the-surface, heightened awareness of what is being said. That is, no one wants to say something stupid and get in trouble. Often, people are aware that what they are saying might be offensive if a woman is around, but strangely, somehow not offensive if she’s not there.

That shift to control your mouth is what I call professionalism. Others call it nonsense, a distraction, or the “matriarchy.”

All that said, I’ve changed from someone who agreed with retired Col. Ralph Puckett and unabashedly believed that women should be given the opportunity to join a standards-based infantry and be integrated into it by leaders who enforce that standard, to someone as Elkus says, more agnostic, but for different reasons than he. While he moved to the middle out of respect for those who have “been the man in the arena” or can back claims up with evidence, I moved to the middle because I’m slowly coming to terms with the fact that maybe, just maybe, doing this infantry stuff requires more black magic and voodoo than I once thought.

I know I’m being vague here, as this is an idea I need to flesh out and think about further. There is something very different that I see in the infantry now compared to when I was a 19-year-old infantryman. Time, age, experience, reflection, and distance force me to look at this profession in a completely different way than I did as an angry teenager.

A lot of what I see around me is the result of youth. The infantry is always young, but forever ancient. Boys leave their homes at 18 and are thrust into the infantry, which as a result of its age and general demographic, is at its core a bunch of immature boys led by leaders who grew up in that same environment, but are now tasked with the dreadful duty of controlling the madness. Good training and leadership temper that immaturity, but only so much.

An infantryman’s job is crazy: to close with and destroy the enemy. That requires a level of aggressiveness in physical action and a feeling of moral superiority that must have wacky, long-lasting effects on a person.

What I’m saying is when I was first coming back into the infantry, fueled by a hardcore liberal arts education and years of reflection and armed with a fierce desire to see my Army grow and get better, I felt very confident saying we should allow women the opportunity to fight in the infantry if they can hack it, based purely on the idea of fairness.

Now, being back in and seeing it all for a second time, I still believe that women should be given that opportunity, but the idea that I had before, that good leadership could stymie bad behavior on a grand scale, is waning. This whole thing has less to do with good leadership and more to do with maturity, age, and the nature of what this job entails.

Anyway, that’s an article for another time. My point is that there is a lot at play here, and the surface-level arguments about skeletal strength and pooping next to someone’s face are distractions from the real issue, which I think is defining what it is our infantry… is.

Don Gomez is an Army officer. He blogs atCarrying the Gun. Follow him onTwitter.