7 Tips For How To Interact With Your Congressional Office

Congress. In the eyes of service members and veterans, grooming standards and reflective belts are more popular than our national... 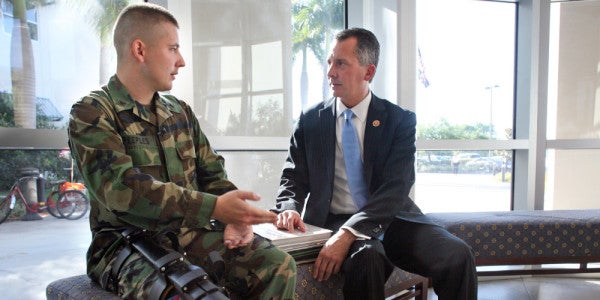 Congress. In the eyes of service members and veterans, grooming standards and reflective belts are more popular than our national governing body. Yes, it’s ultra-partisan, petulant, and privileged. However, it is not entirely ineffective despite what you may have heard. Congressional offices offer an influential ally, able to assist on anything from a records request to initiating legislation on vets issues. The trick to being successful, however, is knowing how to use it.

I speak from first-hand knowledge, as I was a skeptic until my local congressman offered me a job doing veterans outreach and casework. From April 2013 to the present, I have served as the point of contact on all military and veterans-related issues in Iowa’s 1st congressional district. I’ll be vacating that post at the end of December as my boss lost the election and will be retiring from elected life.

In that span, I spoke with hundreds of veterans and saw a wide variety of issues and casework comes across my desk. One of the things I encountered, however, was that a large portion of the veterans I talked to didn’t know the capabilities that our office had. Now, not every office is going to have a veteran on staff who can speak the language, so be prepared to do some explaining but I’ll cover that and more in the list below.

1. Put aside the partisanship.

Unless you have a legitimate, deep-seated hatred towards your representatives, it is worth your time to assess their offices and see how they can be of assistance. Remember, you have two Senate offices and one congressional office that represent you, no matter where you live. You may not like the political affiliation of the person representing you, but you aren’t going to be working with them directly. I had many people tell me that they were on the politically opposite side of the fence, but respected my boss for his work and stance on veterans’ issues.

Members of their staff are going to be the subject matter experts on how to get things done with a federal agency. Think of it like this: if you had any sort of issue with any of the S-shops in your unit, who were you going to talk to? The officer in charge, who is filling a billet, or the E-5 that has been there for three years? Caseworkers shouldn’t ask or care what your political affiliation is. If they do, find another office.

DD-214. DD-214. DD-214. That piece of paper is your lifeline to getting timely assistance. If you are preparing to inquire or get assistance with anything related to your service, make sure you have a copy of it because the congressional office is going to need it. If you don’t have it, for whatever reason, it’s a relatively easy fix. If you were Army or Air Force, it is going to be stored at the National Personnel Records Center in St. Louis, Missouri. For Navy and Marine Corps veterans, your records are held with your respective branch’s human resource command.

Now, depending on your branch of service, simple records requests can take anywhere from a week to a few months. Recent records tend to arrive fairly quickly while the Navy and Marine Corps tend to take more time. If you are dealing with another agency, say Defense Finance and Accounting Service or Veterans Affairs, make sure you have copies of all the relevant paperwork before you turn anything over to a caseworker. Protocol differs from office to office and some may destroy personal identifying information as soon as your case is finished.

Congressional inquiries with federal agencies carry a lot of weight. That being said, they can’t solve every problem. Discharge upgrades were ones that I saw no success with. Unless there is proof that there was some sort of error in the process or well-documented extenuating circumstances, a congressional inquiry is unlikely to change a board of review’s decision.

I have a very specific reason for placing this point directly after expectation management. People are bound to be disappointed when they receive an outcome they don’t like and they are likely to lash out at the person delivering the news. I’ve been cussed out over the phone more times than I can remember and while I’ve tried to maintain my cool; it was hard not to get defensive. Threatening or intimidating staff members is a surefire way to get on a “do not answer” list and a check in from the U.S. Capitol Police. If you are pissed off about something, take a deep breath before you dial the phone or walk into the office. Staff members, like anyone, are going to be more apt to work with you if you aren’t berating them.

5. Make sure you are coming to the right place.

This also ties into expectation management, but for different reasons than being polite. Remember, congressional offices deal only with federal agencies. A lot of issues, such as filing for VA disability and education benefits, can be handled by your county veterans service officer. When it comes to benefits, it’s actually best to wait until you are in the appeals process to contact an office. If a congressional inquiry is launched, the VA actually has to take the claim out for examination, slowing down the process. Despite all that, if your caseworker is dialed in to the veteran services in the area, he or she should be able to direct you to where you need to go.

6. Stay in communication but be patient.

At any given time, I was managing 20-30 cases across a wide swath of federal agencies. In addition to casework management, there were outreach hours, specific veteran events, and meetings with other constituents. In short, I stayed fairly busy. If your caseworker hasn’t touched base with you in awhile, shoot an email asking for an update. It helped give me a reminder to focus in specifically on one case. If your case has already been submitted, but you haven’t heard from the office, it’s likely being worked on at the respective agency. Most had a pretty sizable backlog and addressed the cases in the order they came in. It never hurts to stay in touch, but sometimes no news is good news.

Even after you’ve finished up with a case, it never hurts to stay in touch with an office. If you are truly interested in affecting legislative change for veterans, drop by and talk about any upcoming legislation or issues you would like to see addressed. At several roundtable events that we held, I could tell that my boss was personally affected by the stories that veterans told about post-traumatic stress and suicide. Congress will only be effective if you are willing to make your voice heard.

Assisting my fellow veterans was both personally and professionally rewarding. Many were very appreciative when my office was able to follow through with a successful resolution. I wasn’t able to deliver for everyone; yet nearly every veteran and service member I spoke to was appreciative of our efforts, regardless of the outcome.

Hopefully, you don’t have to utilize a congressional office for any casework issues, but if you do, this should provide you some ideas on how it works and how to be successful. And remember, while it may appear that Congress is unproductive and dysfunctional, it’s pretty effective when you know how to work with it.