It’s hard to imagine a scenario where a device that allows you to blast a soda can from your AR-15... 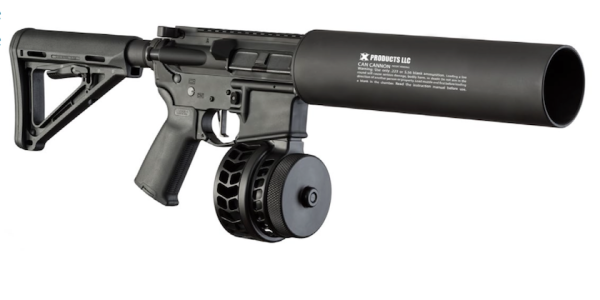 It’s hard to imagine a scenario where a device that allows you to blast a soda can from your AR-15 or M16 would ever be necessary. But a few years ago, Washington-based firearm accessory manufacturer X Products unveiled the Can Cannon Soda Can Launcher, which does just that. Because why the hell not?

Compatible with any AR-15 mil standard bolt and most piston bolts, the Can Cannon ($399) is now, as of April 2016, 100% legal in the United States and not considered a firearm (‘Murica!). And while there might not be any clear utilitarian function for this bad boy, with a little imagination, there can be.

For example, because it’s capable of firing any standard unopened 12oz can at an average distance of 105 yards, the Cannon could be used to shoot cold beers at (or to) your friends during crowded parties; though, given how powerful the launcher is, a direct shot, even to the hands, would probably hurt … a lot.

There is, however, a safer option for those who enjoy a little live target practice: the Cannon also shoots tennis balls — albeit at an incredibly high (and probably painful) rate of speed.

And the fun doesn’t stop there. In fact, according to the X Products’ website, “projectile options are only limited by your creativity and local laws.” Is there a law against shooting a squirrel with a bottle of A1 Steak Sauce? Well, there’s only one way to find out.

X Products has some additional projectile ideas of their own. They’ve just designed a Can Cannon-compatible grappling hook, which could prove useful if you’re dressing up as Batman this Halloween. Also in the works: a net launcher, lawn darts, and, yes, even a harpoon.