St. Louis police are bidding farewell to what was once called “the deadliest weapon, pound for pound, ever devised by... 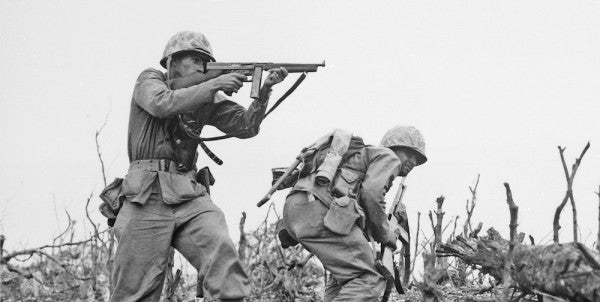 St. Louis police are bidding farewell to what was once called “the deadliest weapon, pound for pound, ever devised by man.”

The St. Louis Metropolitan Police Department recently announced plans to unload 27 vintage .45 ACP Thompson submachine guns from its arsenal. for an average of $23,000 apiece to a Kentucky-based specialist tactical and patrol firearms company called Midwest Distributors. The sale of the legendary weapons will net the department $618,500 to update its current sidearms, but at the cost of some historic firepower. After all, these are the same iconic Tommy Guns that infamously “made the 20s roar.”

SLMPD originally purchased the Thompsons the height of the Great Depression and Prohibition to fight fire with fire. During the 1920s and 30s, law enforcement agencies scrambled to keep up with then-ubiquitous gangsters increasingly armed with the brutal and brash new American submachine gun. Eventually, police departments and the FBI realized the only way to combat the Tommy Gun's awesome firepower was to purchase their own.

SLMPD’s current arsenal includes various models from the 1920s and a World War II-era M1 dating from 1942, but their Tommy Guns have languished in storage since the 1960s. In recent years, police departments across the United States have in recent years moved to sell off their antique inventories to fund new equipment: Vintage Tommy Guns are extremely sought after by collectors, with transferable fully automatic models often commanding upwards of $30,000 at auction depending on age, condition, and model.

A lance-corporal of the British East Surrey Regiment with Thompson M1928 on November 25, 1940.Photo via Imperial War Museum/Wikimedia Commons

SLMPD first began to explore a potential Thompson firesale back in 2014 before reaching a deal in January with Midwest Distributors, which looks set to make a tidy profit on the purchase. Of the SLMPD 29 Thompsons, the department will retain two with plans for display at the city's Crime Lab.

The sale of the 27 Thompsons to Midwest Distributors also coincides with the sale of 1,748 aging Beretta 92 pistols and some .223 patrol carbines for $597,000 to a second company, Minneapolis-based sporting goods wholesalers Bill Hicks & Co. In all, the sales will bring in $1.2 million to St. Louis PD’s coffers.

The sale comes as SLMPD officials recently asked the local government for $2 million in funding to hire new officers and expand pay for existing staff. But with budget shortfalls ravaging state and local governments across the U.S., the department has looked for alternate methods to raise funds for weapon and equipment purchases.