‘They Could Have Run But Did Not’: Read John Kelly’s Letter For 2 Heroic Marines Who Stopped A Suicide Bomber

On Apr. 22, 2008, two Marine infantrymen stood in place as a suicide truck bomber came barreling toward them. Six... 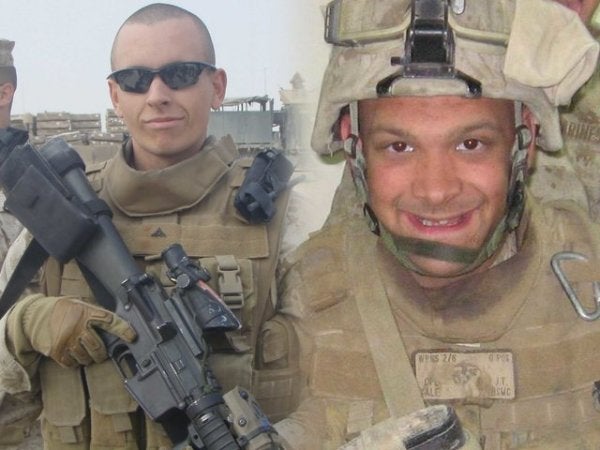 On Apr. 22, 2008, two Marine infantrymen stood in place as a suicide truck bomber came barreling toward them. Six seconds later the truck exploded, killing them both.

In the aftermath, witnesses and security camera footage showed they didn't hesitate and opened fire to neutralize the threat — saving the lives of at least 50 others inside their small joint base with Iraqi police.

I didn't hear of the case of Cpl. Jonathan Yale and Lance Cpl. Jordan Haerter until 2014, when a colleague published an article about a speech then-Gen. John Kelly gave in which he retold their heroic story to a group of Gold Star families.

As Kelly related in his speech, they had no time to think or ask for guidance from higher. When they saw the truck careening through the serpentine entrance of their post in Ramadi they stood in place and opened fire.

Instead, they stood their ground.

I submitted a Freedom of Information Act request to the Marine Corps in August for documents related to their award recommendations (they both were awarded the Navy Cross); on Thursday I received a response.

The packet contained a number of witness statements to the event, recounting different perspectives on what happened at around 7:45 that morning. One Marine, for example, told investigators he heard an Iraqi policeman yelling and then heard a burst of around “10 to 15 rounds” before he later woke up by an Iraqi police truck, having been literally blown away and injured.

He did not realize at the time the burst he heard was Yale and Haerter, but, according to the documents, he got up and the post they were in “was gone,” he said. “I ran over there and could not find the two Marines that were in the post.” Shortly after he found their bodies in the rubble, but did not remember much else and was medically evacuated.

Speaking of that day from another angle outside that main entrance, an Iraqi policeman told investigators that after he realized a suicide truck bomb was heading toward the gate, he opened fire on it from behind while fire (from Yale and Haerter) came from the entrance.

Meanwhile, another policeman told of one of his colleagues, who did not have a clear enough view to fire at the truck. Instead, according to his statement, the Iraqi policeman withdrew away from the gate as the two Marines remained in place and fired. “When it exploded the rubble and debris covered his body and after this he was pulled from underneath the rubble.”

The award recommendations for both Yale and Haerter paint a clear picture of extraordinary heroism. But Kelly, then the commander of all U.S. and Iraqi forces in Iraq, knew it would be difficult to get an award for the two Marines approved based solely on testimony from non-American sources. So he wrote a letter in support of their actions, based on his own investigation.

I find such a letter worth reading, for both its forceful retelling of the events and its magnitude, which was likely a major deciding factor in these two Marines getting the recognition they deserved.

Their bravery and sacrifice was etched into history more than a decade ago. The following letter, written by Kelly on May 19, 2008, perhaps tells their story best:

At 0745C on 22 April 2008, Joint Security Station, JSS, Nasser, Ramadi, Iraq, was attacked by a very large truck bomb with an estimate explosive weight over 2,000 lbs. The truck was driven by a suicide bomber who was consumed in the blast. At the time two battalions, 1st Battalion 9th Marines and 2nd Battalion 8th Marines were conducting a relief in place at JSS Nasser. The JSS by its nature who housed a relatively large number of Iraqi police. At the time of the attack two Marines, Corporal Jonathan T. Yale and Lance Corporal Jordan C. Haerter were standing post at the entry control point (ECP) along with two Iraqi policemen. At least 8 other Iraqi policemen were also on duty about 60m away at the intersection (Routes Apple and Sophia) of a busy city street, and the entrance alley to the JSS in the Sophia District of Ramadi.

Without warning a Mercedes tank truck made the turn and immediately accelerated negotiating the serpentine careening towards the entryway of the JSS compound. The Marines undoubtedly understood immediately what was taking place as they went straight to the guns without any escalation of force firing continuously until the truck lurched to a stop just outside the compound's gate, and literally a few feet from the Marines, when it detonated. Both Marines were killed still firing their weapons. Three Marines were also wounded over 100m from the event, as were at least eight Iraqi officers and 24 civilians. A nearby mosque and house were both destroyed, with a number of others houses suffering significant damage. The blast crater measured 20 feet in diameter and five feet deep. At the time of the attack, and because of the ongoing relief in place, there were over 50 Marines on site with a similar number of Iraqi police officers. It was only due to the bravery of the two Marines that a catastrophe was averted, but that is exactly why they were there to prevent such a bomb from entering the compound and they did exactly that.

When interviewing several police officers separately on 25 April at the JSS they all told essentially the same story. When the truck turned down the entryway to the JSS the tip off that it was not an innocent delivery was that it accelerated through the concrete Jersey walls. The Marines on station immediately began to fire then some of the police joined in. One of the officers made the point that no sane man would have stood there and fired — yet two men did. Another said he knew the Marines were crazy (he meant fearless I think), but this was beyond what he'd seen Marines do even when he was fighting us as an insurgent two years before. A third who was no more than 15 feet from the two Marines when the truck turned into the alley ran to safety in the few seconds it took the truck to negotiate the 60 m to the gate (caught on tape). He survived. He told me when he observed the truck accelerating and the Marines firing he ran but the Marines did not. All were in agreement that had the Marines not stood their ground to their deaths the truck would have wiped out the JSS and everyone in it.

Subsequent to my taking these interviews I viewed a video of the entire event captured by our surveillance camera at the entryway of the JSS. It took several days to forensically recover the images from the badly damaged camera. I did not know either one of the hero's, but I have known thousands like them in my career. They will do anything we ask them to do — even to their deaths. Like the police officers they could have run and likely survived, but did not. I do not think anyone would have called them cowards if they had. They took seriously the duties and responsibilities of a Marine on post, and stood their ground before they would allow anyone or anything to pass. For their dedication they lost their lives. Because they did what they did only 2 families had their hearts broken on 22 April, rather than as many as 50. These families will never know how truly close they came to a knock on the door that night.