As President Donald Trump and Secretary of Defense James Mattis remained deliberately vague about the U.S. response to the Syrian... 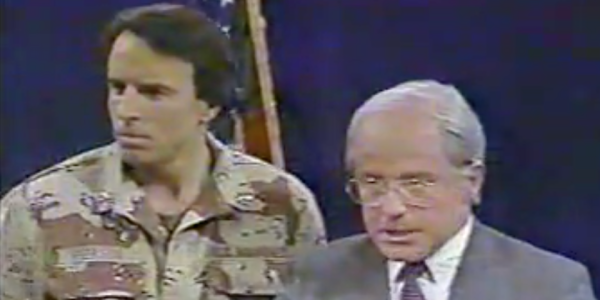 As President Donald Trump and Secretary of Defense James Mattis remained deliberately vague about the U.S. response to the Syrian government’s alleged use of chemical weapons, Pentagon officials had a clear message for the media: Keep calm and stop screwing with OPSEC.

In the run-up to the April 13 missile strikes on three Syrian government facilities, DoD officials devoted time to swatting down rampant speculation about — among other things — the position of Russian warships in the region, the alleged buzzing of the USS Donald Cook by Russian aircraft, and an “armada” of 12 U.S. Navy vessels steaming toward the Middle East.

These stories would have all constituted grievous OPSEC violations — had they been true. Instead, the Tomahawk cruise missiles that pounded Syrian facilities on Friday originated from the guided-missile cruiser USS Monterey and the Arleigh Burke-class destroyer USS Laboon near Egypt, as Business Insider notes; in the eastern Mediterranean, the submarine USS John Warner fired off some missiles while submerged. According to DoD officials, the Syrian interceptors failed miserably.

If all of this is eerily familiar — well, it should be. Please enjoy this vintage 1991 “Saturday Night Live” sketch on the inanity of Pentagon press briefings during Operation Desert Storm, featuring Kevin Nealon as beleaguered DoD PAO Lt. Col. William Pierson (not that one) and the late, great Phil Hartman as then-SecDef Dick Cheney (with some creepily familiar dialogue):

Obviously, not every Pentagon reporter is like this (see: our own Jeff Schogol, or Military Times’ Tara Copp), but the message is clear: Journalists who are 1) unfamiliar with the goings-on of the U.S. military establishment and 2) totally wired by the prospect of chronicling A War are an OPSEC trainwreck.

The practice of asking stupid questions with self-serious intonation is an art form that CNN pioneered, thanks to the Gulf War; in the SNL sketch, Dana Carvey best captures the inanity of trying to squeeze newsy blood from a stone: “Colonel, knowing what you know, where would you say our forces are most vulnerable to attacks and where would you say the Iraqis could best exploit those weaknesses?”

It’s worth noting that this isn’t about making fun of journalists (although it’s easy!), but the whole circus act that is the highly public Pentagon briefing in the first place. After all, the DoD has gradually closed ranks in recent years: In October 2017, Mattis sent a strong warning to DoD personnel warning against leaks and urging efforts “to prevent unauthorized disclosure of non-public information,” followed by a massive push by the Air Force to retool its public affairs posture months later. The OPSEC claim has become, as retired Army Col. Steve Boylan recently wrote at Task & Purpose, “the blanket to avoid answering what you can and should.”

And this is the real message that makes this vintage bit of prime SNL relevant to the whole media frenzy around the recent U.S. strikes in Syria: everything is a damn sideshow, and we absolutely *love* it. The more things change, the more they stay the same.

Lt. Col. Pierson wouldn’t be Nealon’s only appearance at a Pentagon podium: In the same season, he also appeared as Gen. Subliminal, a U.S. Central Command spokesman who follows every piece of crafted Pentagon bullshit with the truth behind what he’s saying.

“Before any bombings, all Iraqi targets are positively identified by U.S. intelligence (CNN),” Nealon jokes. Boy, you don’t know the half of it.