Soldiers need to be polite, respectful and know how to live with others, according to the Army. 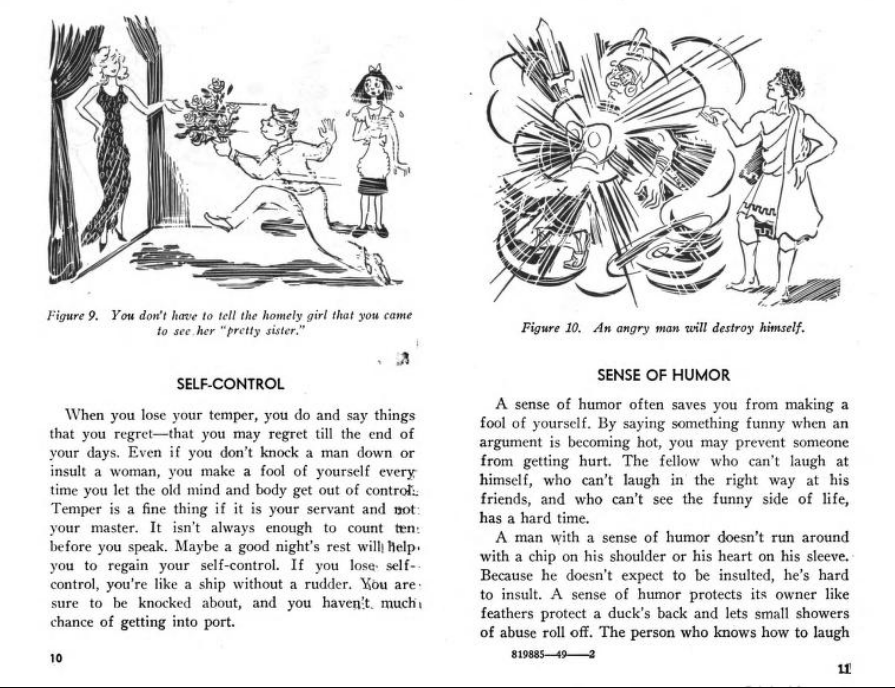 A spread from Personal Conduct for the Soldier. (Screenshot).
SHARE

What’s the most important skill for a soldier? Manners of course. That’s at least what the U.S. Army thought in 1949. That’s why the Department of the Army published a specific pamphlet for officers and enlisted soldiers on how to be polite, courteous and well-mannered.

The book, Personal Conduct for the Soldier, was published February 1949. As Gen. Omar Bradley, then-Chief of Staff of the Army, says in the forward all soldiers should already be well-versed in good conduct, but the pamphlet is meant to be a useful review. And it’s an interesting look at what the post-World War II Army life was like. It’s been uploaded to the Internet Archive, so you can read it for yourself.

With simplistic, cutesy illustrations and large text, the pamphlet is less field manual and more elementary school-level book. It’s a quick read, just under 100 pages with an index. For a good sense of the book, the opening chapter details what manners were like in the time of George Washington.

“Our manners show, in a way, the respect we have for our country, Army, ourselves, family, friends, and for those whom we meet,” the section on “common sense courtesy” says. The chapter stresses respect for different cultures and nations, while also being loyal to the United States.

Some of the advice mirrors the style of the pamphlet — soldiers are told to practice self control and maybe have a sense of humor to help defuse tension and avoid fights. Other sections talk about life in the barracks, which the Army calls comfortable quarters, and the need to learn to live with other soldiers. Even though the pamphlet is written for all soldiers, experienced or new, it tries to find civilian analogues for barracks life. The day room, for instance, “is similar to the living room.” There’s even an entire chapter on table manners (the pamphlet is right, don’t chew with your mouth open).

“If you want to be happy and be a success as a soldier you must learn to get along with men,” the chapter reads. “Learning to live and work with others may be the most important lesson of your whole life. The Army is an excellent place to learn such a lesson.”

One reoccurring thread in the manners lessons is respect for women (the pamphlet being written to treat all soldiers as men). Soldiers are told to be courteous to women in the military, polite at dances and not to to cat call them on the street.

The final chapter covers serving abroad. Since, in 1946 at least, soldiers constituted the largest portion of Americans overseas, they represent the United States. Although loyalty is important, don’t be braggadocios when overseas, the Army advises.

Personal Conduct for the Soldier is an interesting piece as it was written soon after major changes. World War II saw massive mobilization and a need to organize the different departments under one banner. The new Department of Defense was looking toward the Cold War, but the Army realized the need to make sure its soldiers had good manners.