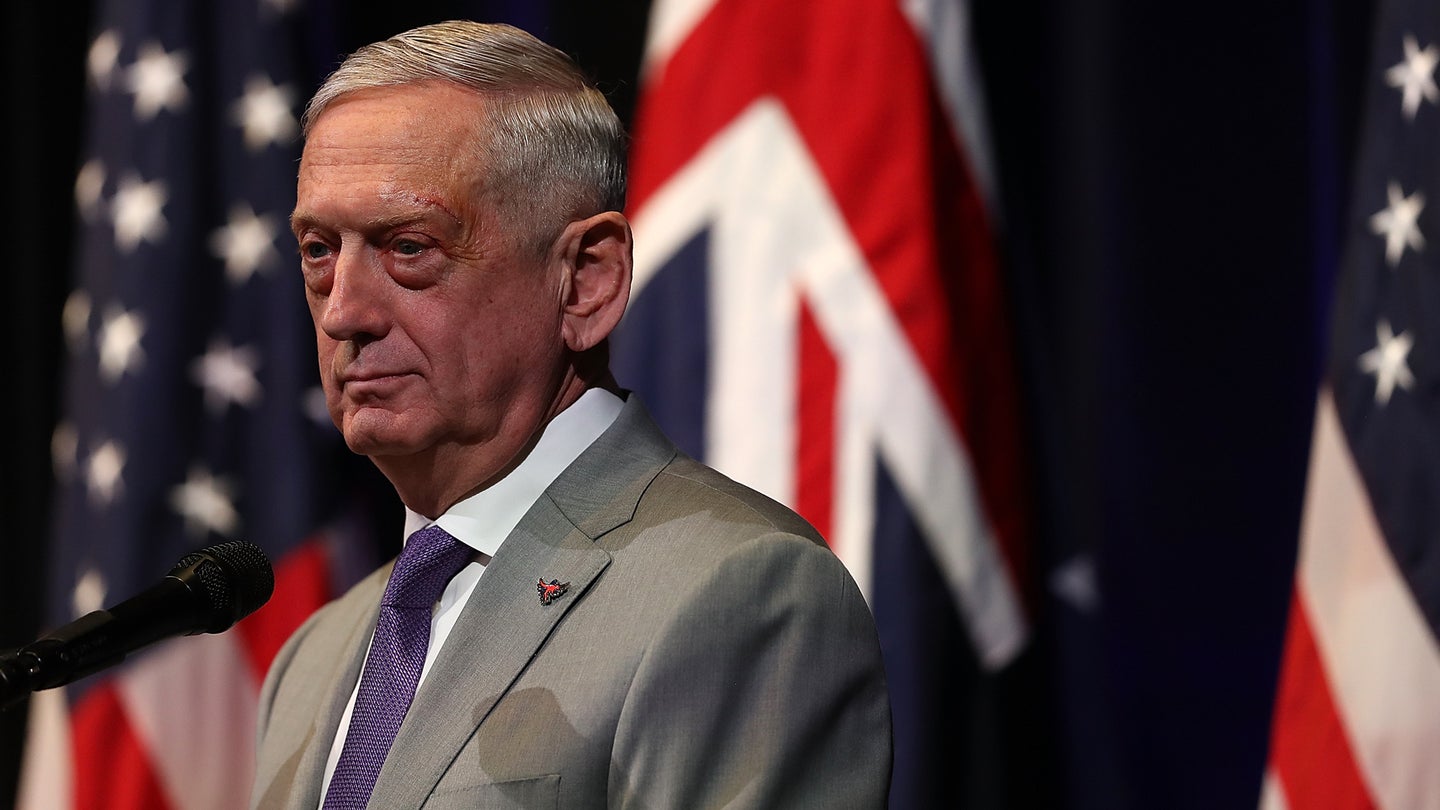 U.S. Secretary of Defense James Mattis looks on during a press conference at the Australia-U.S. Ministerial Consultations (AUSMIN) at the Hoover Institution on the campus of Stanford University on July 24, 2018 in Stanford, California. (Justin Sullivan/Getty Images).
SHARE

This year’s Marine Corps birthday message has everything you’d expect from a Marine video, including gunfire, explosions, and footage of Marines doing cool shit from decades past through today.

But no birthday message would be the same without one of the most legendary Marines in recent memory: Gen. James Mattis.

The Marines’ 247th birthday message, released on Monday ahead of the Corps’ actual birthday on Nov. 10, is a 10-minute montage infused with that hard-charging, quintessential Marine confidence we all know and love. It includes historical footage of past wars, as well as current footage of everyday Marines doing what they do best: training to win whatever challenge is thrown at them next.

And, of course, it includes one of Mattis’ most well-known quotes.

“What keeps you awake at night?” John Dickerson, with CBS News’s Face the Nation, asks Mattis in a clip from a 2017 interview.

“Nothing,” Mattis responds, as the video shows a Marine with full camouflage face paint staring into the camera. “I keep other people awake at night.”

Throughout Mattis’ 44-year career, he has been hailed as a Marine’s Marine, helped in part by his uncanny ability to deploy quotes you might believe were thought up in Hollywood. Like the time he told Marines just arriving in Iraq in 2003 to “be professional, but have a plan to kill everybody you meet,” or when in the same year he reportedly told Iraqi military leaders: “If you fuck with me, I’ll kill you all.”

That classic Marine confidence didn’t stop when he retired in 2013 and later became the Secretary of Defense, nor did it stop after he left Washington, D.C. For instance, Mattis has since gotten married in the most Marine way possible — in Vegas, with an Elvis impersonator.

And then there was the time earlier this year when Mattis went out of his way to greet another retired Marine at a military appreciation banquet in Alaska, reminding her why “many Marines alive today would follow Mattis to the ends of the earth.”

So it stands to reason that as the Marine Corps is celebrating its 247th year, they would include Mattis in the video among other notable Marines, such as Medal of Honor recipient Kyle Carpenter, the great-grandson of Hershel “Woody” Williams, and Col. Nicole Mann, a Marine who flew 47 combat missions in Iraq and Afghanistan and is the first female Marine to become a NASA mission commander.

As much as the birthday message referenced battles past and victories that were won years ago, it also looked forward to the adversaries of today and tomorrow, assuring America’s allies and enemies alike that Marines around the globe are as ready as they’ve ever been.

“Our adversaries have always had a choice: abandon their aggressions, or stand and fight. Some chose to fight and were destroyed. Today, our adversaries still have a choice,” the video says. “And they know if they choose to fight, they will be defeated.”