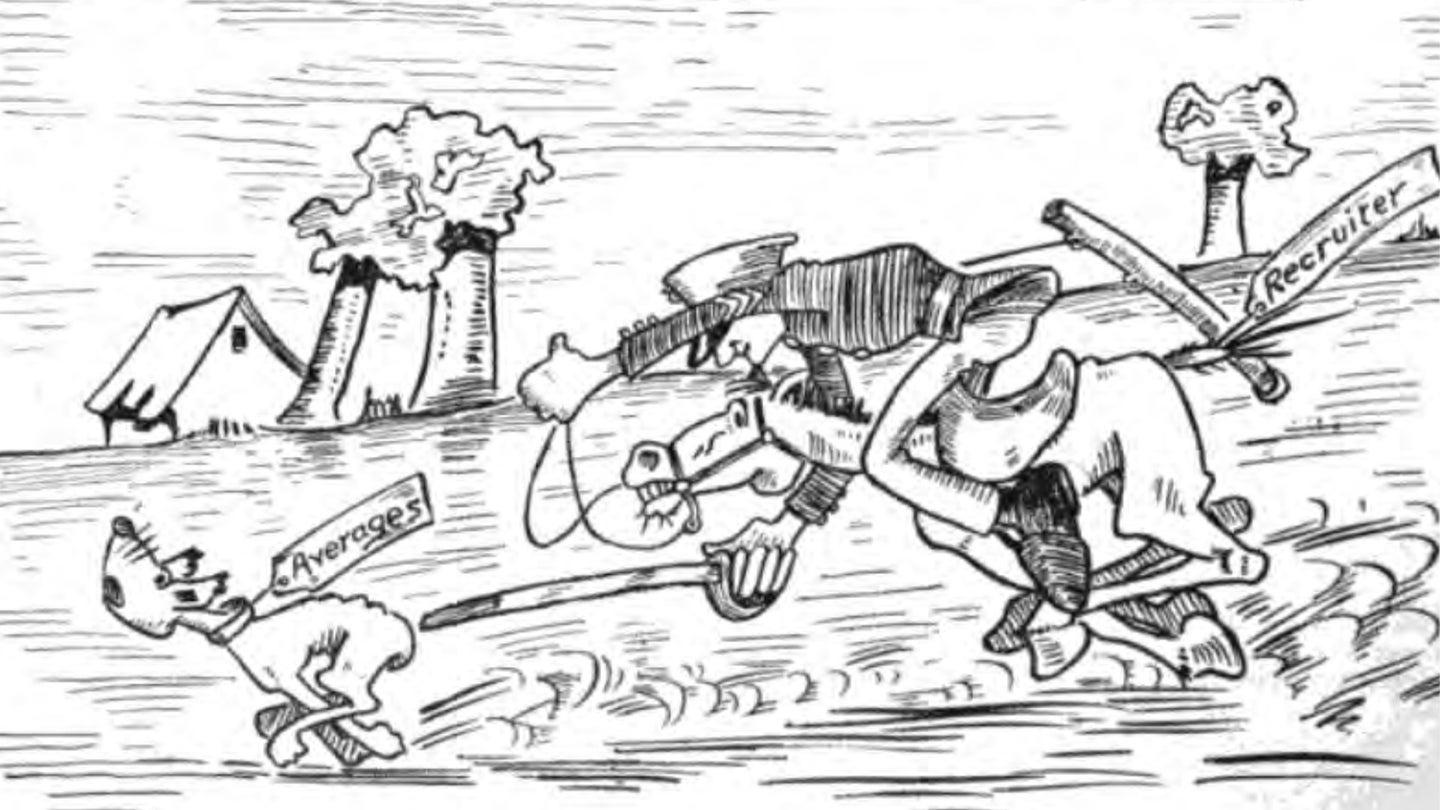 The uniforms, the equipment and the slang of the Marine Corps may have changed quite a bit since 1916, but some things never do. Some of those constants include longing to get back from a deployment overseas, the tedium of being in garrison, or recruiters lamenting how hard it is to find enough able-bodied recruits. And more than 100 years ago, there was no better way to poke fun at these trials and tribulations than with Marine Corps cartoons.

The Mud and the Mirth: Marine Cartoonists in WWI, written earlier this year by Cord Scott, a professor at the University of Maryland Global Campus and published by the Marine Corps University Press, offers a look back at some of these Terminal Lance-style comic strips of yesteryear.

The illustrations were mostly drawn by enlisted Marines and were featured in publications like Recruiters’ Bulletin and Marines Magazine.

This cartoon, published in 1917 and drawn by Pvt. Paul Woyshner, offers a look at recruiting for the Marines. In one illustration, a recruiter holding his “persuader” club chases after a one-legged man, offering to enlist him as a quartermaster sergeant, to which the man replies that he actually wants to work for a living. It’s worth noting that some of these cartoons have not aged well and incorporated racial stereotypes that were common in the era. This same panel also features a recruiter trying to lasso a Native American man who wants to return to his four wives.

Another Woyshner cartoon from 1918 shows a Marine writing about what he expects to face when he gets to France to fight in World War I. After surviving a shipwreck by clinging to a barrel — rifle still in hand, of course — the cartoon ends with the Marine peeling potatoes.

This cartoon drawn by Pvt. Grant Powers is simply timeless.

Other cartoons chronicled the Marine Corps’ extensive deployments around the Caribbean. This one, drawn by Pvt. Mike Gawron for Marines Magazine, shows a Marine landing in the Dominican Republic and promptly sinking to the sea floor.

And in one that Marines will surely still appreciate today, Gawron riffs on former Army soldiers who have enlisted in the Marines.

Would it surprise you to know that the former soldier is the one digging a ditch while a non-commissioned officer encourages everyone to “shake it up”?

Another Marine, Cpl. A.H. Newman, produced this gem, which shows a Marine complaining about everything from inspections to drill to the sorry state of the chow, never failing to let his buddies know that he can’t wait to get out. After a short stint on the “USS Outside,” though, this Marine is right back in uniform.

Artists like Woyshner, Gawron and Newman drew on their experiences as enlisted Marines for these cartoons, just as Marines today do the same in photos, videos, or memes. It’s one of the timeless elements of the Marine Corps — getting through how much it can suck with a little humor.

Scott’s book, filled with plenty of other illustrations, can be found here.