"Wait a minute, this is the future ... where are all the phaser guns?" 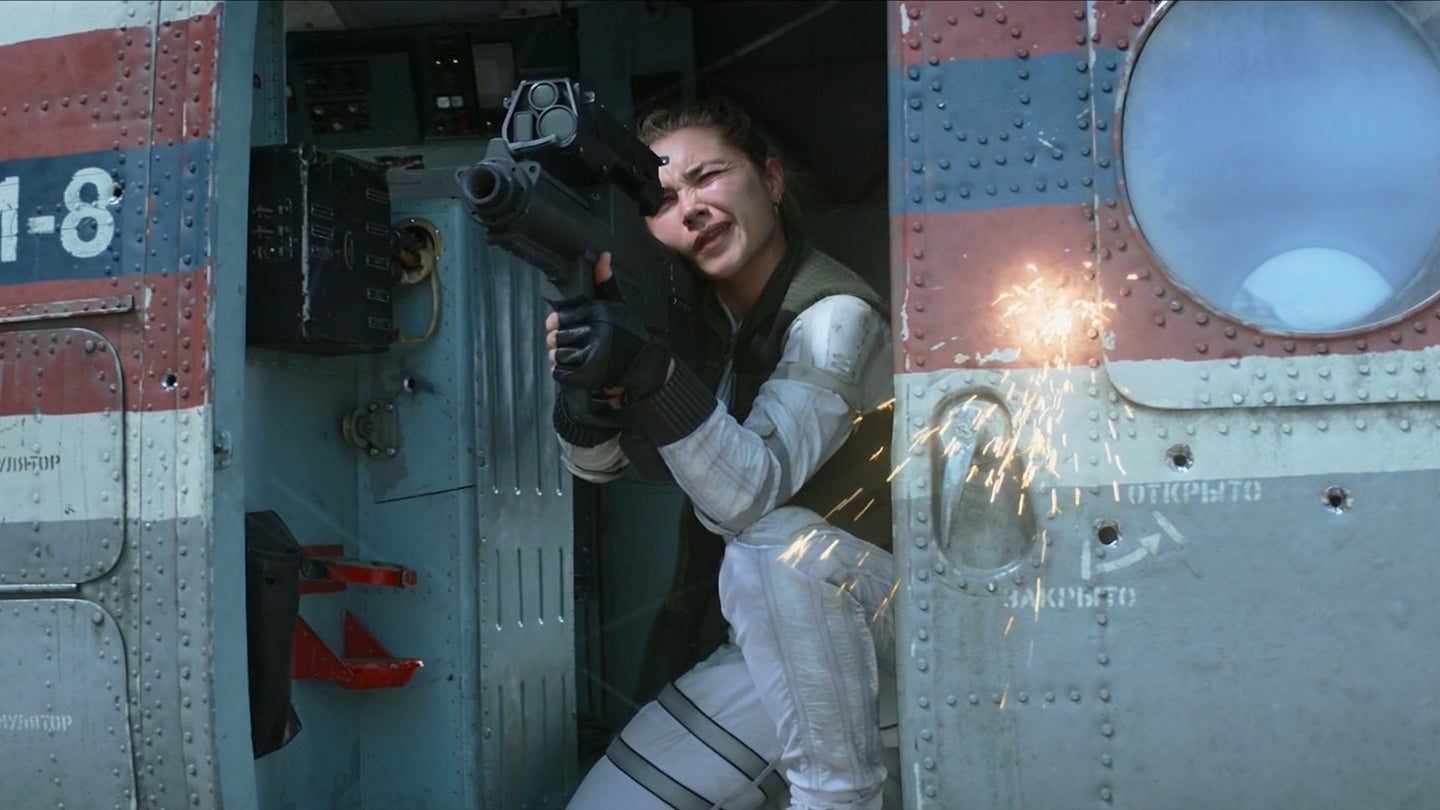 When it comes to the world of action cinema, a truly talented armorer can summon fictional firearms out of thin air. With the right additions, a skilled mind can transform AKS-74U into the multi-functional Zorg ZF-1 Pod Weapon System from The Fifth Element, or slap together Ruger Mini-14/AC-556 rifles and Ithaca 37 pump-action shotgun to form the venerably utilitarian Morita series of rifles from Starship Troopers. Hell, nobody cared about the Mauser M712 Schnellfeuer pistol until George Lucas turned it into Han Solo’s reliable BlasTech DL-44 Heavy Blaster Pistol on the set of Star Wars.

But the realm of action and sci-fi isn’t the only place that’s obsessed with finding the next big gun: look no further than the halls of the Defense Department, which only recently eked out a purported replacement for the M4 carbine and M249 Squad Automatic Weapon in the form of the XM5 and XM250 Next Generation Squad Weapon variants. But while moviemakers manage to build the best and brightest new toys with relative ease, no such luck applies to the Pentagon, which spent nearly 40 years working through Advanced Combat Rifles and Objective Individual Combat Weapons in search of the perfect next-generation service rifle. Sure, it took from 1982 to peacekeeping operations in Kosovo in 1999 for the U.S. military to formally field the M4 carbine, but no search has left more potential candidates in its wake than the search for its replacement.

Luckily, Hollywood is always there to pick up where the Pentagon leaves off — quite literally, in fact. Below is a brief tour of potential U.S. military weapons systems that, once abandoned to the ashheap of history, found second life as a futuristic firearm on the silver screen. (Is it weird that all of them are Heckler & Koch weapons? I didn’t think so.)

An unusual bullpup-style assault rifle that chambered caseless ammunition (and a personal favorite of the Task & Purpose team), firearms manufacturer Heckler & Koch offered the prototype G11 assault rifle to the U.S. Army during the Advanced Combat Rifle (ACR) program that ran from 1986 to 1990. Defined by its blocky appearance, only 1,000 units of the G11 were ever produced, and the rifle eventually entered cinematic history as the “Magnetic Accelerator” 1X.31A particle weapon pilfered from a museum armory exhibit in 2032 by insane convict Simon Phoenix (Wesley Snipes) in the dystopian action comedy Demolition Man.

The XM29 Objective Individual Combat Weapon (OICW), also known as the “Selectable Assault Battle Rifle” or SABR, was a post-ACR attempt to produce a hybrid 5.56mm assault rifle-airburst grenade launcher firearm in order to replace the M16, the M4 carbine, and the M203 grenade launcher all in one sitting. Developed as part of the DoD’s Small Arms Master Plan (SAMP) weapon series that ran from the mid-1990s until 2005, the insanely-bulked but undeniably-futuristic-looking XM29 became a featured firearm in the hands of Jean-Claude Van Damme in Universal Solider: The Return and that godawful final Pierce Brosnan James Bond flick Die Another Day, although both versions were in fact mocked-up MP5 and G36Ks, respectively, per the Internet Movie Firearms Database.

The cancellation of the XM29 OICW gave birth to a handful of successor prototypes, chief among them the XM25 semiautomatic airbursting grenade launcher that was developed from the XM29’s grenade launcher module. While other prototype weapons often died on the vine before seeing rigorous field testing, the ‘Punisher’ actually ended up in the hands of 101st Airborne Division soldiers in Afghanistan before field testing was halted in 2013 and the program was formally killed in 2017. Luckily for the moviegoing public, the Punisher found a second life as an extremely deadly surprise for guards at a Russian prison when Yelena Belova (Florence Pugh) takes out their observation tower in the Marvel movie Black Widow.

A modular assault rifle spun off from the rifle portion of the XM29 OICW, the XM8 that emerged in 2002 based on Heckler & Koch’s G36 rifle series was seen as a potential replacement for the M4 carbine and M16, but according to the Internet Movie Firearms Database, Army personnel who got their hands on the prototypes immediately complained about the weight of the system as well as a the low battery life of the integrated optic and a handguard that melted during sustained use. The only true cinematic appearance of the rifle, which features a distinctive curved handle and “birdcage” flash hider, was in XXX: State of the Union, where this bad boy graced the likes of Ice Cube and Samuel L. Jackson. (The weapon’s appearance in Children of Men and District 13: Ultimatum, were apparently Airsoft replicas.)