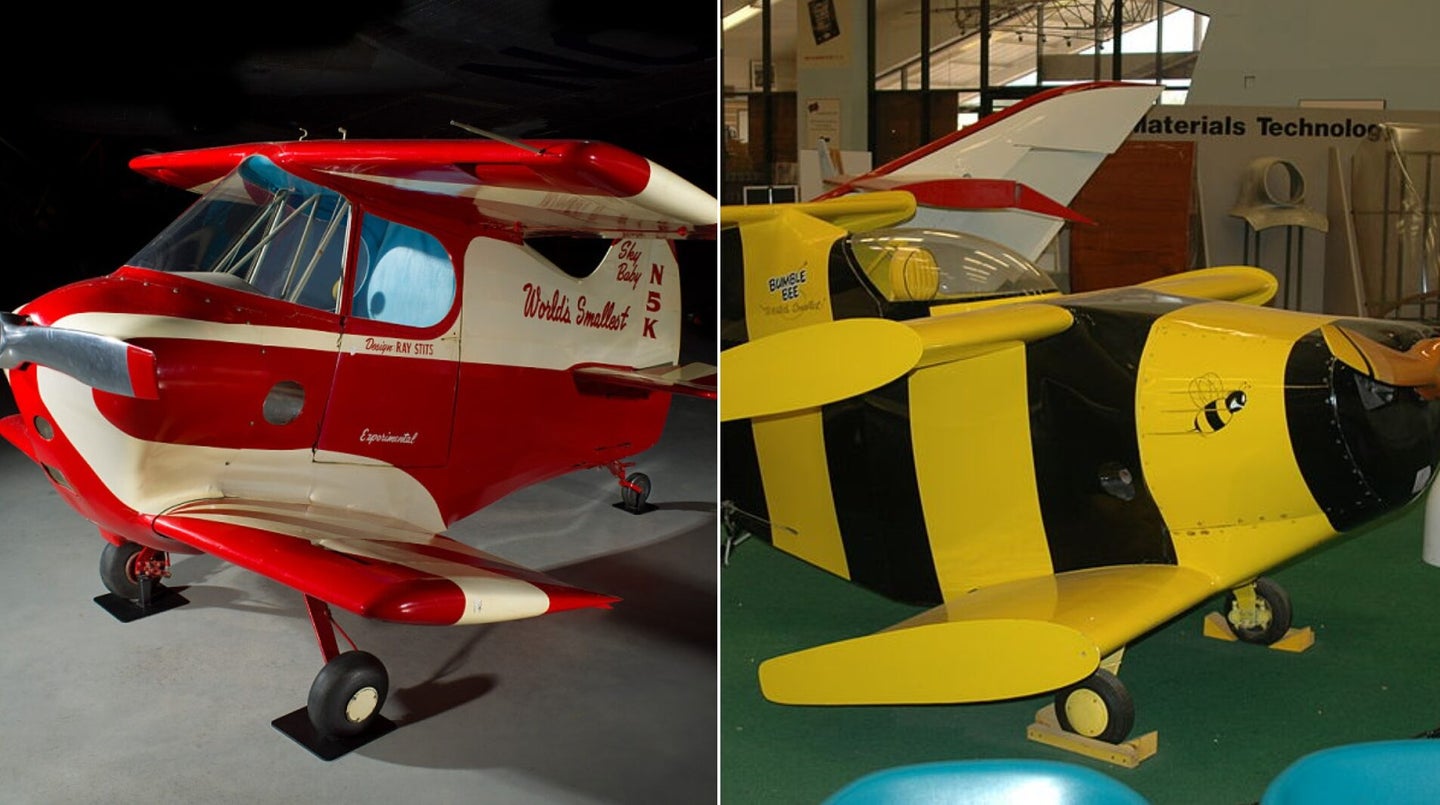 Left to right: Ray Stits' Sky Baby, once the smallest plane in the world, and its successor, Robert Starr's Bumble Bee I (Photos via Smithsonian / Wikipedia Commons / Rseinc).
SHARE

Everybody has a hobby, and for some it involves building airplanes in their garage. Ray Stits and Robert Starr were two such people who drew upon their knowledge of fixing and flying aircraft in the military to become pioneers in the world of homebuilt aircraft. Along the way, they created some of the smallest aircraft ever built, aircraft that look more like go-carts than flying machines. Like many great stories, this one started with a bet.

“It was Kellogg Field in Battle Creek, Michigan, in the summer of 1948,” Stits recalled in an article for Kitplanes magazine. Stits was repairing aircraft at the Battle Creek Flying School and talking shop with his buddies when he asked a rhetorical question.

“‘If I was to build an aircraft with a 10-foot 10-inch wingspan, and a 10-foot 10-inch fuselage, would it be the world’s smallest airplane?’” Stits said. “One self-proclaimed aviation expert said, ‘Stits, you can’t do it!’ and that was all the incentive I needed to finally start an aircraft project I’d long thought about building.”

Who knows how long Stits had been thinking about building such an airplane, but he’d long had a fascination with aviation, dating back to his teenage years, according to an article in Ingenium. In 1941, Stits followed his passion by becoming a mechanic in the U.S. Army Air Forces. By 1948 he was doing what he loved most: designing airplanes. Between 1948 and 1965, Stits designed and built 15 small aircraft, including the smallest in the world, according to his 2015 obituary.

The first of those tiny designs was the aptly-named ‘Junior.’ Built around a 40 horsepower engine (for scale, gas-powered golf carts typically have 10 to 12 horsepower), Junior was actually too small for Stits to fly, according to Kitplanes. Luckily he found someone who could fit in the 15-inch wide cockpit, but the plane crashed after rising 10 feet off the ground. Not to be discouraged, Stits rebuilt Junior with a 65-horsepower engine and found a pilot named Robert Starr to fly it in airshows.

While Stits had been working on airplanes in the Army Air Forces and building them from scratch, Starr had been flying P-40 Warhawks, P-51 Mustangs and F-86 Sabre jets for the military, according to an article about him in Disciples of Flight. After leaving the military, Starr began flying civilian experimental aircraft like Junior. In January 1950, Starr flew the small plane at the Miami All American Air Maneuvers airshow in Florida, which led to Stits getting requests from fellow enthusiasts for the aircraft’s blueprints, according to Kitplanes. The inventor designed a larger airplane that was easier to fly, called it Playboy and eventually moved with his family to Riverside, California, near Los Angeles. But the tiny airplane quest was far from over.

After Junior wrecked again due to engine trouble, Stits started working on an even smaller airplane: Sky Baby. Completed in 1952, Sky Baby was made of steel tubing, spruce wood and an 85-horsepower engine, according to the National Air and Space Museum, which displays the aircraft in the Udvar-Hazy Center in Virginia. Soon Starr was flying Sky Baby in air shows just like he did with Junior.

Though Stits went on to invent other aircraft and a set of non-flammable Poly-Fiber building materials to make homebuilding less dangerous, Sky Baby was his last attempt to build the smallest aircraft in the world. But he had lit a fire in Starr, who felt he had not received proper credit for his help building Junior and Sky Baby, wrote the Pima Air & Space Museum. Starr wanted to claim the record for himself, and he did so in January 1984 with Bumble Bee I, a biplane painted yellow like its namesake.

With a six foot, six inch wingspan and a range of 20 miles, Bumble Bee’s time at the top was short-lived. In August that same year, Stits’ son, Donald, built “Baby Bird,” a tiny blue monoplane that looks more like a cartoon than an aircraft.

“If the garage door is open, people driving by slow down and try to figure out what it is,” Donald told the Los Angeles Times in 1986. “They can’t figure out if it’s a model airplane or not.”

Baby Bird drew heat from Starr, who maintained that his Bumble Bee was still the smallest airplane in the world.

“His airplane is longer and higher than mine,” Starr told the Los Angeles Times about Donald. “Mine would fit into a smaller cube than his.”

However, Donald said Starr was holding a grudge against his family going back to his work on Sky Baby in the 1950s. Starr said he helped design the plane, but Ray Stits insisted he played no part in that process, the Los Angeles Times reported. Donald said all Starr contributed was the 85-horsepower engine that powered Sky Baby.

Later, Donald also clarified that his own Baby Bird did not stem from a rivalry with Starr.

“I had designed, built, and was taxi-testing the Baby Bird when I heard about Bob’s first flight in his Bumblebee,” he told Task & Purpose. “My project had nothing to do with Bob or the rivalry.”

Still, the beef between the inventors is incredible to read: Donald said he beat Starr with a shorter wingspan, which Donald claimed is the most important part of the airplane. Starr’s Bumble Bee is a biplane, which means it has even more wing compared to Baby Bird, Donald argued. But Bumble Bee was lower to the ground and had a shorter fuselage, Starr pointed out, and Baby Bird “can’t accommodate a full-sized pilot,” he told the Los Angeles Times.

“Full-sized” is open to interpretation, but no matter how you see it, Starr went on to build one more tiny airplane: Bumble Bee II. The yellow biplane took off near Tuscon, Arizona in April, 1988, setting the Guinness World Record for smallest aircraft to fly, though Donald’s Baby Bird still has the record for smallest monoplane. Starr did not have much time to celebrate: the extremely unstable Bumble Bee II crashed on May 5, 1988, severely injuring Starr, wrote Guinness World Records.

“It remains the smallest crewed aircraft by dimensions, although the Stits’ Baby Bird is the smallest by takeoff weight,” the organization added.

Starr eventually recovered, but his tiny airplane days were over. He passed away in 2009, and maybe he and Ray Stits are still arguing somewhere about whose plane is smaller. No matter what, one thing Starr, Stits and Donald had in common was a desire to prove the skeptics wrong.

“An engineer would tell you my airplane wouldn’t fly,” Donald Stits told the Los Angeles Times. “According to engineering theory, it would be very unstable and would require a very high takeoff speed.”

In a similar vein, Starr is said to have named his airplanes Bumble Bee because of the long-running (but false) myth that bees’ wings are too small in proportion to their big round bodies to fly. Skeptics said Starr’s plane would not fly for a similar reason, according to Disciples of Flight. Of course, none of the skeptics have Stits’ or Starr’s world records.

“The purpose is to prove it could be done,” Stits told the Los Angeles Times. And that, after all, is no small thing.