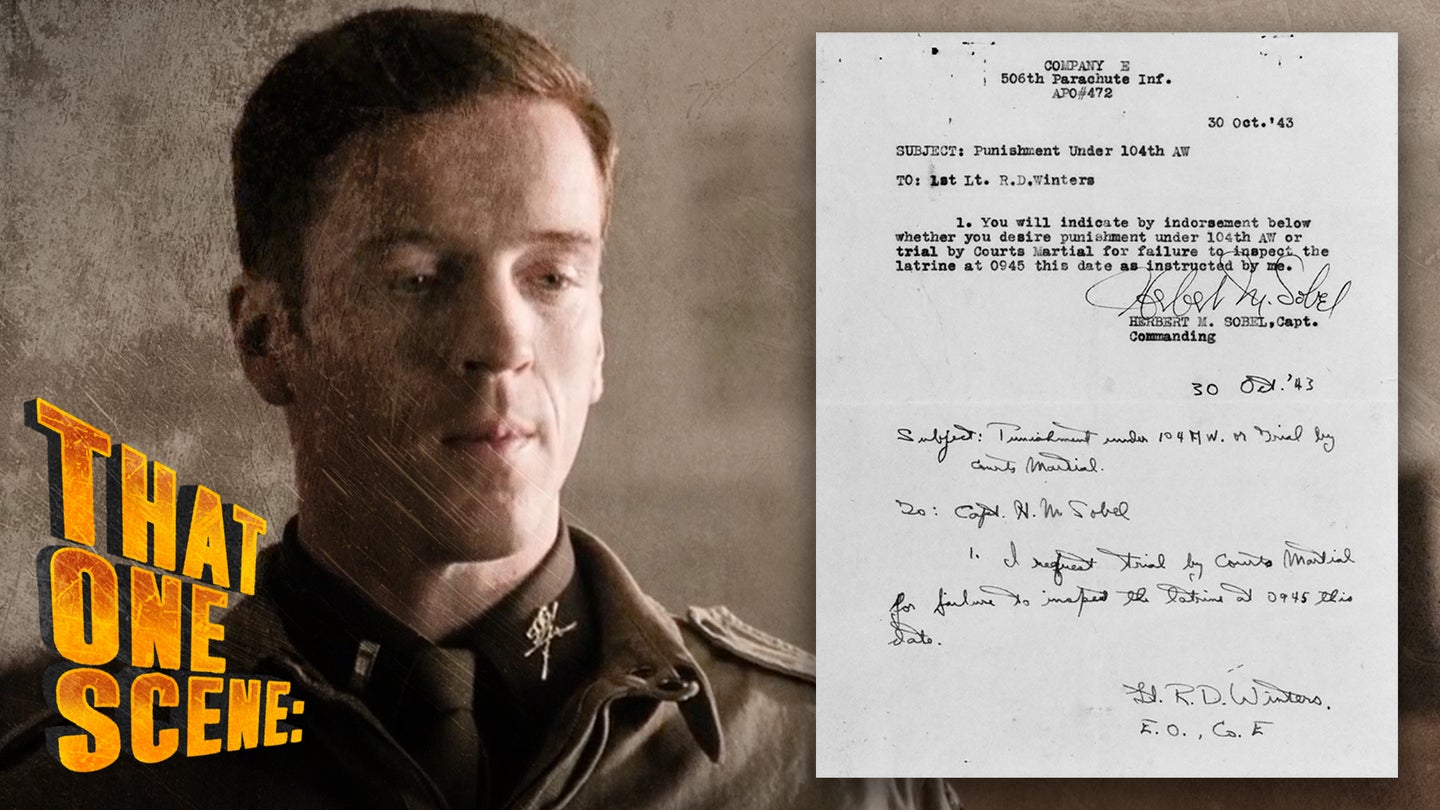 Welcome to That One Scene, a semi-regular series in which Task & Purpose writers wax nostalgic about that one scene from a beloved (or hated) military movie or show.

There’s a lot of bullshit in the military and it comes in many forms and for many reasons. There are ass chewings over uniform regulations, bloused boots, cuffed sleeves, shaved faces and hair length, as well as strongly worded reprimands for failing to show up 15 minutes early to formation. Oftentimes that’s all there is to it. You take the verbal hits and move on.

But there is always — always — that little voice in the back of your head that dares you, double dog dares you, to take it higher up the chain of command. To force that staff sergeant, or lieutenant or captain to throw the book at you so everyone can see in bold ink just how much time they wasted screwing you over for, well, whatever it was that got them so riled up in the first place.

That’s rarely a good idea and it’s not guaranteed to work out, but it would be so goddamn gratifying.

It’d also be great to just see it happen, and as luck would have it, for anyone who’s watched HBO’s 2001 hit World War II series “Band of Brothers,” they kind of have seen that, because it did happen — not just on screen, but in real life.

In the very first episode of the series, then 1st Lt. Richard “Dick” Winters (played by Damian Lewis) is given the option to accept his punishment for a minor infraction or to request a trial by court-martial. Winters chooses the latter and signs the paperwork as his commanding officer, Capt. Herbert Sobel, played by a very sour-looking David Schwimmer, stares at him in stunned silence.

Though the series is closely based on actual events, that one scene almost feels like it was written with disgruntled and borderline belligerent service members in mind, and as such, I’d often wondered if it played out that way. Well, it looks like it did.

In the book “Hang Tough: The WWII Letters and Artifacts of Major Dick Winters” by Erik Dorr, the author included a copy of Sobel’s reprimand, along with Winters’ signature and his request for trial by court-martial, which can be read below:

The leadup to Sobel and Winters’ confrontation occurs in the first half of the episode, which follows the early days of Easy Company of the 506th Parachute Infantry Regiment, long before they jumped into Normandy and then fought their way across Europe, through ambushes and sieges in snow-covered forests, all the way to Germany and then to Hitler’s mountaintop hideaway where they liberated bottles of expensive booze from defeated Nazis and celebrated their hard-won victory.

Back then, before they were the legendary Easy Company under the leadership of Winters, they were under Sobel’s command. In the show Sobel serves as a foil to Winters. The former is a tough disciplinarian who’s more concerned with how the performance of his men reflects on him than he is with his own leadership and how it serves his soldiers. For his part, Winters repeatedly goes to extraordinary lengths to put the welfare of his soldiers before his own.

By the time Easy Company arrived in England ahead of the Normandy invasion, Sobel and Winters’ relationship had strained, and was nearing a breaking point.

Included in “Hang Tough” are a pair of photos that Winters sent back home, one of himself and another of Sobel with a fake mustache drawn on his face, along with a less than flattering description of the ranking officer. (Emphasis added):

“Nowadays I am holding the new title of executive officer for Co. E, 506th, a position I’ve been holding for three months without title. My job is to take charge of the company when the captain isn’t around, and he never is, and do the paper work. Don’t ask me what the captain does. Also, I now have six months seniority as a 1st Lt. so I am eligible for promotion, but that’s out of the question for there are no openings.”

However humorous as it may have been — and it is downright funny — Winters’ criticism of Sobel wasn’t without some risk, given his commanding officer’s habit of screening outgoing mail.

“Winters’s subtle jab at the newly promoted Capt. Sobel was as antagonistic a description of his superior as he dared to write,” Dorr wrote. “After all, Sobel was known for searches and seizures of ‘contraband’ in soldier footlockers. The captain possessed talent in molding men into athletic fighting machines. At the same time, his physical absence from clerical duties and his psychological absence during war games prompted Winters to warrant a vote of no confidence.”

In the series, the court-martial scene takes place during this tenuous period, with the unit preparing for a major operation and the commanding and executive officers on the outs.

Sobel takes disciplinary action against Winters for failing to arrive on time to inspect the soldiers cleaning the latrine — a shit detail for all involved, to be sure. However, Sobel changed the time of the inspection at the last moment, and though he claimed to have called Winters (the home where he’s staying had no phone), and sent a runner to tell him about the change (none arrived), the message was never received. Even though it’s a trivial issue, Sobel insists on punishing Winters.

“So, your options are quite simple, lieutenant. Punishment for your offenses will be denial of a 48-hour pass for 60 days,” Sobel says, before ordering Winters to stand before him at the position of attention. “Or, you may initiate a letter of appeal and request a trial by court-martial.”

Sobel even seems to suggest that he’s aware he may be going too far, when he tries to downplay the punishment, telling Winters that “You spend your weekends on base anyway, Dick. Be a man and take the punishment.”

Instead, Winters tells his commanding officer, “I request trial by court-martial,” before rendering a crisp salute and exiting the room with a sharp about-face.

The ensuing court-martial caused a ripple that was quickly added to a tidal wave of dissent in Easy Company. After a number of mistakes during training operations, the company’s faith in Sobel, which had already begun to fade, vanished altogether. With Winters relegated to administrative duties outside of the company during his court-martial, the unit’s noncommissioned officers took a risk, a big one: They refused to serve under Sobel’s command.

As Dorr writes in “Hang Tough”:

“A band of sergeants mutinied against Sobel, writing a letter to Col. Sink indicating their unwillingness [to] serve under the captain. Risking their own futures, the men unleashed a verbal volley undermining Sobel’s authority and abilities. Several of the sergeants were accordingly punished for insubordination. Realizing how sour the situation was, Sink at last transferred the captain from Easy Company that February. He was replaced by Lt. Thomas Meehan from B Company. Meehan, a Philadelphian, possessed a kinder disposition. Winters was folded back into his former role. In the opinion of paratrooper Don Malarkey, “Winters quietly orchestrated the deal to force Sobel out. Not for his selfish gain, mind you; that wasn’t Winters’s style. He was among the most selfless men I’ve ever had the privilege of serving with. No, he did it for the good of the men. He did it to save their lives.” In any case, the company was glad to be rid of the irascible captain.”

The episode’s court-martial scene, albeit brief, is a great one not just because it plays to those fantasies of calling out a volatile leader who wields his authority like a cudgel, but for how it elevates one who’d rather use his position as a shield to protect their men.

And it doesn’t hurt that it actually happened, either. In fact, that makes it all the better.

What are some other scenes from military movies and shows that caught your eye? Hop in the comments and let us know, and we may do a breakdown of the moment for another installment of That One Scene.