“A couple pilots were getting ready to get launched and they saw me and were like ‘What?’” 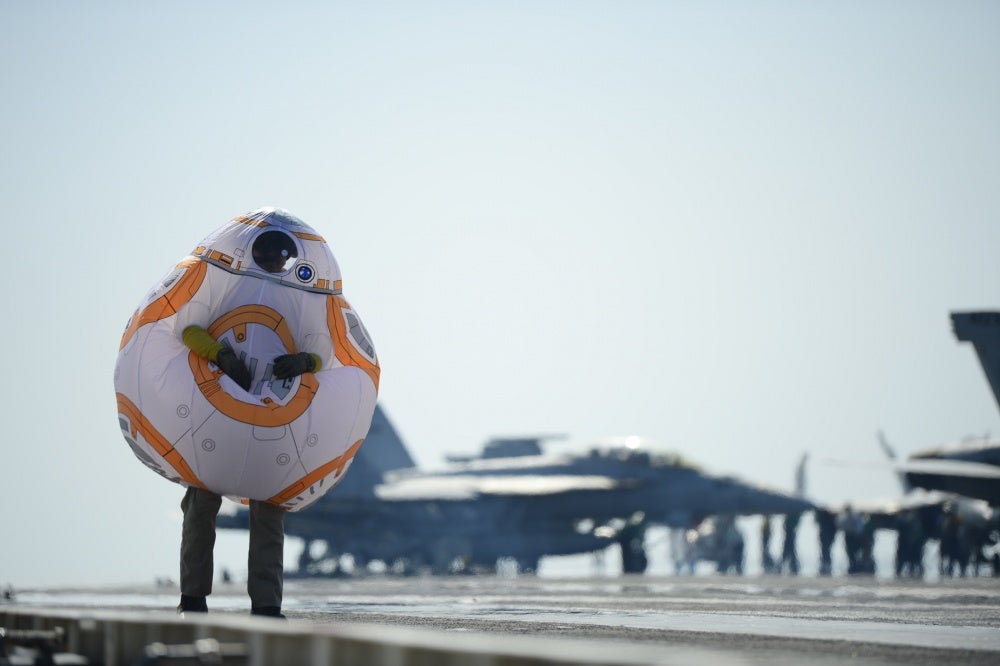 No matter how you feel about the Star Wars sequel trilogy, the feisty astromech known as BB-8 is a solid character, lending all his beepy-chirpy enthusiasm to the desperate fight against the First Order.

Related: Mattis: ‘If This Was Vodka, It Would Be A Lot Better Speech’

That was partly why Navy Lt. Kevin Pitcock chose to dress up as him for Star Wars Day (May 4th) this year while walking the flight deck of the aircraft carrier USS Dwight D. Eisenhower.

“I was really excited for Star Wars Day,” Pitcock told Task & Purpose. “I was looking around for a costume on Amazon, and BB-8 just looked like the one that would be the most fun for everybody. He’s a little like R2-D2; a good personality for a droid that doesn’t necessarily talk, or at least I can’t understand it.”

Wearing costumes on the flight deck is a tradition among launch and recovery officers like Pitcock. Also called shooters, launch and recovery officers supervise the flight deck to make sure aircraft are taking off and landing safely. But an occasional costume, like dressing up as Santa Claus on Christmas, helps spice up the day-to-day of flight line ops.

“It’s something a little different, something fun to break up the routine a little bit,” Pitcock said.

A costume may break up the routine, but it can also cause you to break a sweat. When May 4th finally came around, the Eisenhower, or Ike as the crew calls it, was in the Arabian Sea, which for those who don’t know is a little too warm for wearing what is essentially a giant plastic trash bag. Throw in the heat of aircraft jet engines and you’ve got quite a humid outfit.

“I made sure I was hydrated beforehand,” Pitcock said. “It was like a little greenhouse. The gulf is hot to begin with and then putting on a greenhouse on top of that got pretty toasty.”

Still, it made a splash. Pitcock recalled the air boss telling him afterward that a couple of the pilots and folks on the bridge were amused, and also a little confused, by the sight of him walking around like that. The costume had a little motor to inflate the bag so that it looked like the spherical BB-8. While it generally held up, sometimes the costume blew flat in the wind and plastered across Pitcock’s face.

“A couple pilots were getting ready to get launched and they saw me and were like ‘What?’” the sailor recalled.

After 20 to 30 minutes, Pitcock went back down below with a very sweaty May 4th in the books. The sailor grew up watching the original trilogy Star Wars movies, and he found that working on an aircraft carrier has some parallels with the spaceships from a long time ago, in a galaxy far far away.

“Looking out the bridge is like looking out the bridge of a Star Destroyer, with bay windows that look out over the ship,” he said. “In our case we look at the horizon, but at night you can almost believe you’re in space if the stars are bright. And if there’s no moon and you can’t see the ocean you might as well be.”

Even the aircraft look similar to star fighters in the right light. Consider the Navy’s F/A-18 Hornet, which has a silhouette that’s a bit like that of the famous X-Wing with its S-foils in attack position.

“If you filled the flight deck up with X-Wings you might not see any difference,” Pitcock said. Still, there is one Star Wars spacecraft above all that he would love to see take off from the Ike: The Millennium Falcon.

“I really like the cockpit,” he said. “It reminds me of the B-29 [bomber] which is one of the best looking airplanes.”

Pitcock said he did not have any plans at this point for his next Star Wars Day costume, but he does appreciate the Navy’s ability to have some fun like this from time to time, like how he and a crewmate made it fashionable for Ike shipmates to say “ahoy” to each other like salty ol’ pirates.

“It’s funny how quickly it caught on,” he said. “There’s a good number of people who do it now, and some of them are pretty senior to me. Probably the widest distribution is saying it in emails … it’s a little morale boost throughout the day.”

Those little moments of irreverence go a long way for the crew, especially on a ship like the Ike, which broke a record earlier this year for consecutive days at sea.