What it’s like to spend Christmas in combat, according to US military veterans

“It was the best Christmas I have ever had, at home or away.” 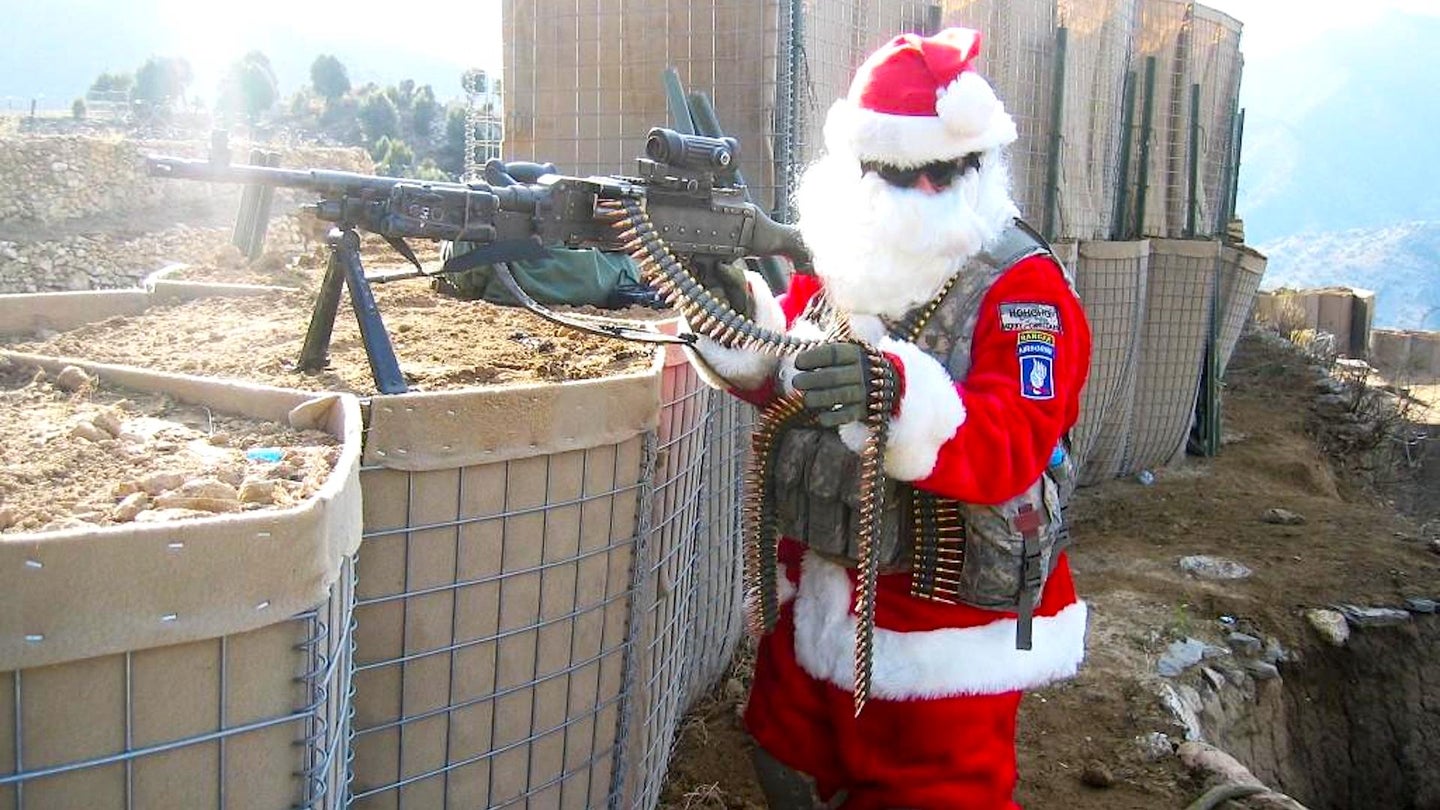 Nobody likes spending Christmas away from home. Whether you’re in firefights or burning shit in a pit, Christmas in a combat zone can often suck.

We asked Task & Purpose readers to share their stories of Christmas in combat with us, and not all of them are depressing. Indeed, there’s often a silver lining in even the toughest holiday conditions.

Take, say, tales of ad hoc decorations aboard a Navy warship, shared with us by long-time reader Brent Leatherman with an invocation of the pathetically adorable Christmas trees of ‘Charlie Brown’ fame.

“Every ship I was on had a few of these guys popping up, here and there,” Leatherman wrote. “My mom never understood why I really liked [Charlie Brown]-style trees, decorated with soda can pop tops and tiny Tabasco bottles. Sorry, ma, you had to be there.”

Not every makeshift Christmas tree is a weak facsimile of more robust displays of holiday cheer back home. Look no further than this metal-as-fuck Christmas tree from Joey Bennett, who spent Christmas in Ramadi, Iraq in 2005.

“Sandbags for the base and concertina wire for the frame, with linked 7.62×51 mm ammo draped over the concertina wire in a zigzag fashion adding to the tree’s volume and shape,” Bennett, a former Army sniper, told Task & Purpose. “M67 fragmentation grenades with the appropriate green and red tape (for safety, of course) adorned the tree like ornaments from Target, and 50 caliber armor piercing rounds were also hung with care but the piece de resistance was the 5-pointed star made of chem lights that really brought the entire creation into the holiday spirit.”

Of course, Christmas in combat isn’t always a struggle to celebrate the holidays in austere conditions.

“We had a nice easy Christmas morning patrol around the corner from higher up took a 3-hour security halt,” recalled Thomas Brenner. “Then came back around the other side of the compound and finished out the day playing Texas Holdem over a lite (sic) post rotation and steaks.”

Then again, sometimes the most dangerous thing downrange is Christmas dinner itself, which Army veteran Mike Barin, unfortunately, discovered during the holidays 15 years ago following a patrol in Baqubah, Iraq.

“We swung by the COP to grab some dinner plates, and wouldn’t you know it: chicken fucking cordon bleu again,” Barin recalled in an email to Task  & Purpose. “The disgusting meat puck filled with viscous white fluid; lightly breaded.

Barin had just come off raiding a house with his platoon and hadn’t eaten all day, so he “begrudgingly” ate his Christmas Eve dinner and washed it down with a pomegranate Rip-It before heading back out on patrol, he said.

After finally getting the call to return to base, things went south.

“My head was throbbing, [my] skin was clammy, and I felt the uneven pressure of nausea washing over my body,” Barin recalled. “I slapped the guy in the air guard hatch and launched into it before he’s even out of it … and I projectile vomited all over the sniper glass.”

A shower and nap later and Barin was still alternating between vomiting and dry heaving. Finally, he “spewed a blood clot” in front of a Navy Corpsman and was sent to the clinic, where doctors decided to medevac him to Camp Anaconda at Balad Air Base.

“I come to find out, my body had a violent reaction to chicken cordon bleu, and caused me to rip the pyloric valve between my esophagus and stomach,” Barin recalled. “I spent Christmas Day in emergency surgery to stop my internal bleeding and then doped up on morphine for a bit.”

Barin came to on Christmas night, where he saw an unidentified general coming around handing out challenge coins and thanking the different people forced to spend the holidays in the medical ward.

“What’re you here for, son?” the general asked the bed next to Barin’s

“IED, sir,” the service members next to him responded.

Then the general turned and looked at Barin: “And what about you son?”

I’m not sure what, maybe morphine, caused me to answer him the way I did: “Fucking chicken cordon bleu, sir. Blew a gasket.”

The general’s aide glared at Barin while the general went slack-jawed for a moment. Then both walked away into the Christmas night.

Despite the mundanity of military service, other Christmases for U.S. troops abroad are moments for, well, a taste of the finer things in life — and, sometimes, moments when leadership truly comes through for rank-and-file service members.

That Christmas couldn’t have come at a tenser time for the pre-9/11 U.S. military. Serbia had pulled out of the former Yugoslav republic after Operation Allied Force compelled Slobodan Milosevic to agree to the province’s political independence, and NATO’s Kosovo Force had taken control to provide a secure environment for the country to carry out its first free and fair popular vote in recent memory.

Crawford’s troops were “instrumental” in keeping a volatile border region from breaking out into a brushfire war following months of unrest earlier that year, he recalled in an email to Task & Purpose, his USNIC one of several NICs providing intelligence support to KFOR. The base was called Film City, a name selected due to rumors the site was a former pornographic movie studio before it became a sprawling NATO base.

As Christmas approached, the British forces who controlled the area promised a feast “fit for a king” in the dining hall, Crawford recalled. Compounding the anticipation of a raucous holiday meal was a wave of food poisoning that had swept through Crawford’s unit in the weeks leading up to the holiday. Finally, at 11 am on Christmas Day, his NCOIC burst into my office.

“Sir, do you know what they’re serving us for Christmas dinner? SPAM!” the NCOIC spat. “I mean, we didn’t expect much more than turkey loaf… but SPAM???”

The crisis was immediate to Crawford. In fairness to his British hosts, SPAM was something of a delicacy during World War II as the only meat dish many could obtain in the heavily-rationed British Isles. But on the other hand, Crawford had 30-odd young men and women under his command, many away from home for six months or more.

“They deserved a bit of civilization,” Crawford recalled.

No time to call up the chain of command, themselves at home with their families in Stuttgart, Germany and Mons, Belgium: Crawford made a snap decision and called his NCOs together.

“I need two volunteers. One communications, and one security policeman.”

“Here’s what we’re going to do. Pack up the vehicles with anyone who wants a real Christmas dinner. Check with everyone, even if they’re asleep. I will take the watch. The three of us (me and the volunteers) will man the NIC. The rest of you, everyone who wants to, you will drive to Camp Bondsteel.”

Fox context: When NATO moved into Kosovo, the United States had leveled a forested mountain outside Urosevac to create Camp Bondsteel, now the largest American installation in Kosovo with a massive exchange, three gargantuan chow halls, a Burger King, and even a Dairy Queen. To Crawford, Camp Bondsteel was “a logistic marvel, where the facilities were frequented by every NATO ally and Russian troops as well … Seeing it, I understood that America’s capability to move stuff anywhere, anytime is why we win wars.”

Crawford’s NCOs herded around 20 of his troops into vehicles, with his last order to the departing service members “to go straight there and come straight back,” he recalled. “And, I asked, bring something back for anyone who didn’t get to go, if it was possible.”

“For the next six hours, I sat in a quiet intelligence center, watching displays and monitoring message traffic, praying silently that I had done the right thing,” Crawford recalled. “Because if things went south, I would be the only one to blame. My ‘career dissipation indicator’ was flashing yellow.”

When my troops came back later that evening, the expressions on their faces said it all.

“The American chow hall had served real turkey. Real ham. Real roast beef. All the trimmings. Pumpkin, pecan, and apple pies. An ice cream bar, replete with over a dozen flavors. They had been fed and fed well. And it had been the right thing to do,” Crawford recalled.

“It was the best Christmas I have ever had, at home or away.”

And with that, we here at Task & Purpose wish you the most serene and trouble-free of holiday seasons — or not, if you’re into that kinda thing. But stay away from chicken cordon bleu or SPAM if you can.