How the military makes sure medals don’t look like garbage 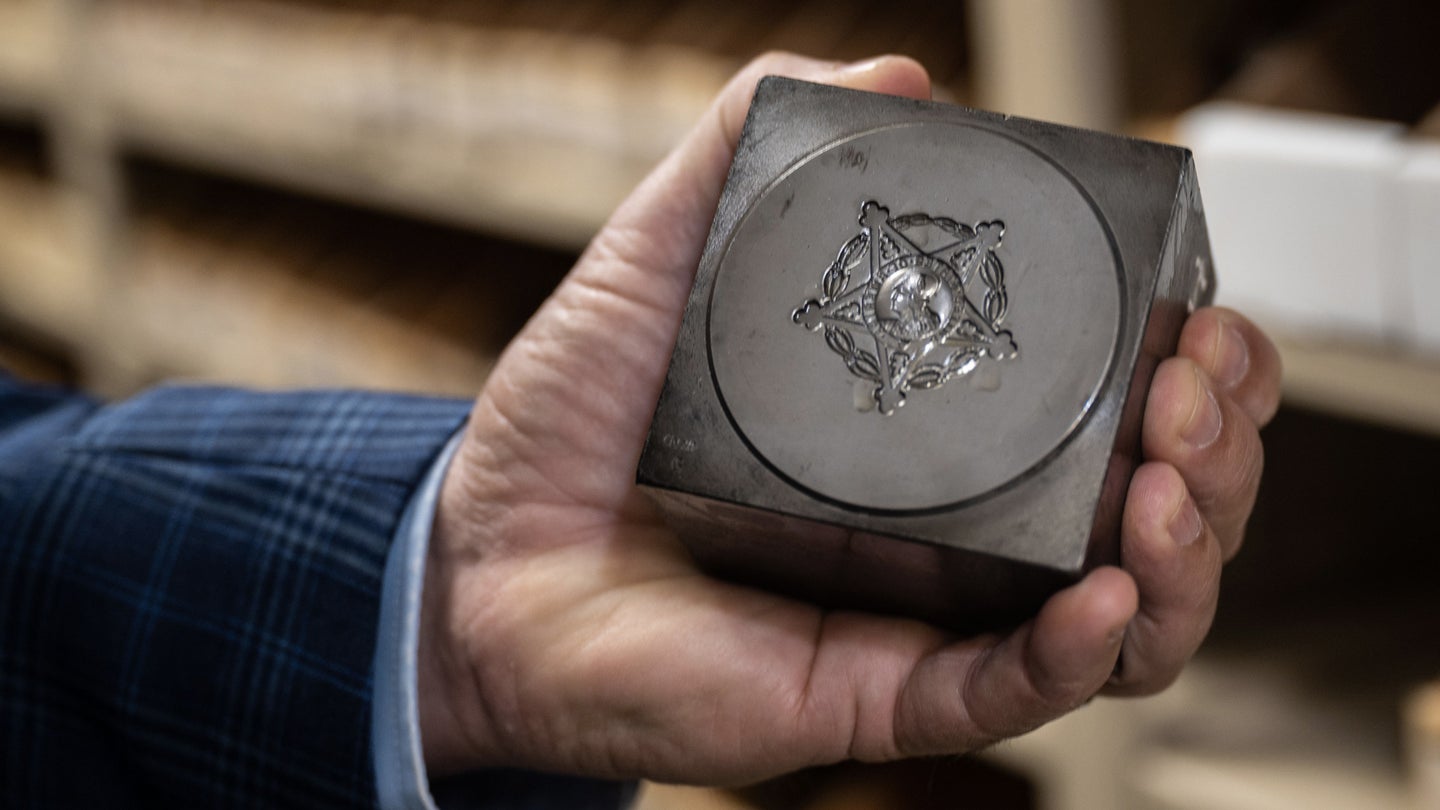 An employee at The Institute of Heraldry holds a steel die that shows the stamp of the Medal of Honor cut into it. (Petty Officer 2nd Class Reina Delgado/U.S. Navy).
SHARE

When service members hear the term ‘military grade’ they often think of cheaply-made or poorly designed garbage that does not work, like the earplugs they used in Iraq or the Army’s Universal Camouflage Pattern.

But there is one thing used by the military which often does stand the test of time: the medals, pins, and other metal-based insignia used for military awards, rank chevrons, and some unit insignia.

Hardware pinned to a service member’s dress uniform or hanging in a shadow box in their home or office is designed by a small office of just 19 civilians, according to a recent Pentagon press release. Located at Fort Belvoir, Virginia, The Institute of Heraldry designs many of the seals and insignia used across the federal government, likely including the chevron on your uniform and the seal on the building where you work.

“Just, whatever you do, don’t call the institute’s products logos — that’s a term used for branding, not organizational identity,” according to a second press release. “And no, they’re not responsible for those challenge coins that service members love to collect (although the insignia stamped onto the coin might be their work).”

The institute has a lot on its plate: in fiscal year 2022, it completed more than 600 projects, including the coats of arms for the Navy’s new support ship USNS John Lewis, the Coast Guard’s new cutter USCG William Chadwick and the seals, flags, badges and other uniform accessories necessary for the three-year-old Space Force.

The artists at the institute create the insignia designs, which then must be approved by the unit or agency receiving them. If they are approved, the institute works with U.S. manufacturers to produce the medals, pins, and other products displaying the insignia.

In order to stamp the institute’s designs onto a piece of metal, manufacturers produce steel molds known as dies. Employees at the institute do not want to create thousands of medals only to realize that the design came out wrong due to a faulty die, so the institute takes each die through a lengthy testing process to make sure it is up to the task.

The die “has the insignia cut into it. That goes into a big press that will literally squeeze a piece of brass and transfer the image to that brass, the base medal of any insignia,” Tom Casciaro, chief of the institute’s technical and production division, said in the press release. “But because of the pressures put on this die in that machine — sometimes it’s 100 tons per square inch — if the steel alloy is not properly tempered, it’ll break. It’ll literally just shatter.”

There are two tests for making sure the dies are ready for the manufacturing process. One is the Rockwell hardness tester, which, you guessed it, tests the hardness of the steel alloy to make sure it is the right strength for striking brass medals. Then there is the ‘depth gauge,’ also known as a dial indicator, which “measures how deep the image of an insignia is cut into the die down to the hundredths or thousandths of an inch,” the press release said.

Even if the die passes muster, the finished medals and pins must also be tested for quality. The press release explained that 99% of all insignia created by the institute is made of red brass, which itself is a composite of 85% copper and 15% zinc. To make sure manufacturers are using the correct metals, the institute uses an X-ray spectrometer, which tells employees what materials a medal or pin is made out of.

After that, the insignia may undergo the Shore D durometer, which tests the hardness of the plastic-like epoxy used on some products like pins, the press release explained. Medals and other products with a nickel or gold finish go through a plating thickness test which, similar to the spectrometer, uses X-rays to make sure the right metals are on the medal.

Leaving no stone unturned, the institute also tests the pointy posts of pins to make sure they are welded on properly, and the medals’ finish to make sure the manufacturer knows how to nail an oxidized matte, super shiny, or other kinds of finish.

Even when all that is complete, some of the experts at the institute go out to military clothing stores and exchange shops to check on the products on sale there.

“If they find anything to be suspect, they’ll take it back to the institute for more detailed testing using the methods above,” the press release explained.

There is an old saying ‘good enough for government work’ to refer to the government’s reputation for shoddy products. Clearly, that saying does not apply to the Institute of Heraldry. If only the same could be said about brand-new fighter jets and refueling tankers.

CORRECTION: 1/20/23; An earlier version of this article inaccurately referred to the equipment used to gauge the depth of an insignia cut into a steel die as a ‘death gauge.’ The name was based on how it was originally described in a Department of Defense press release. The correct term for the equipment is ‘depth gauge.’