The most important sheet of paper you’ll ever get from the Continental Army. 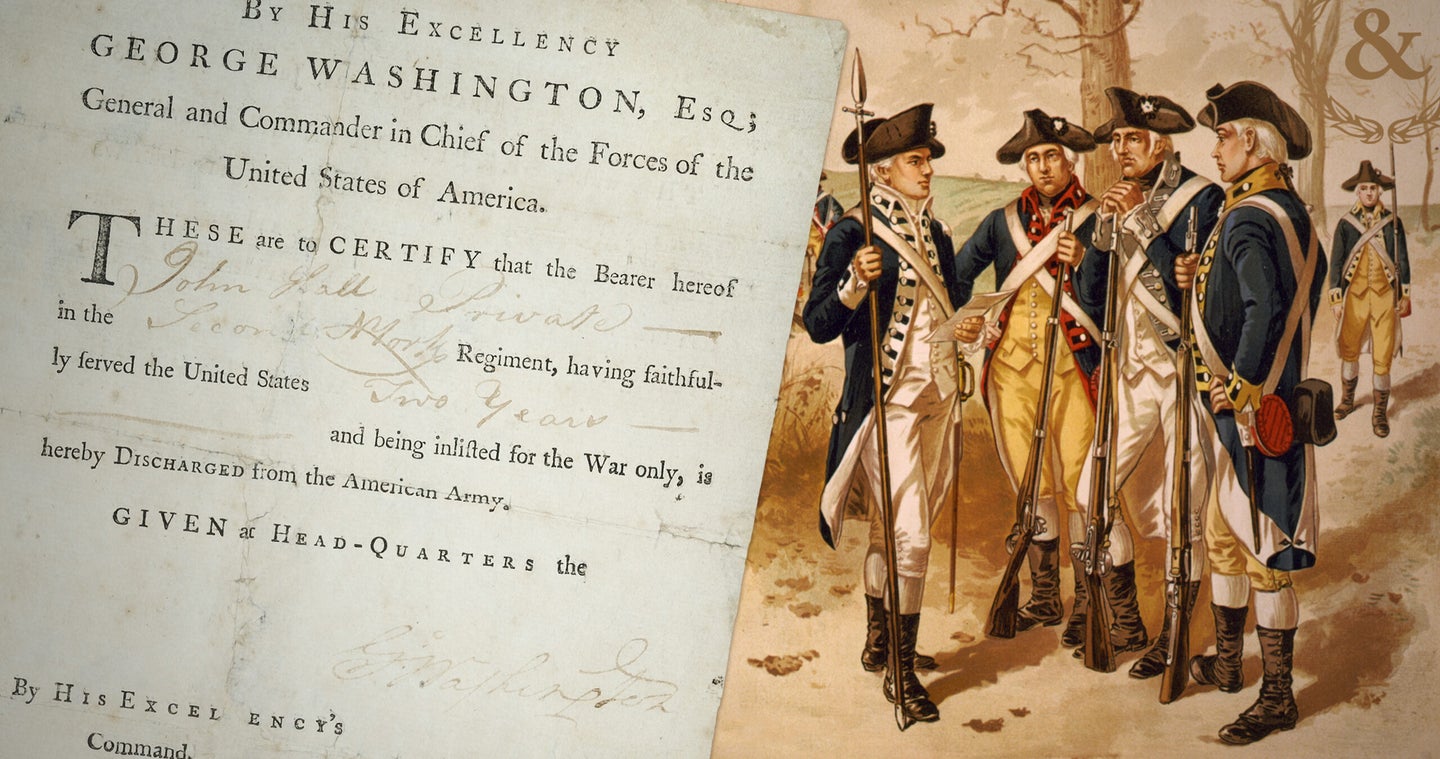 John Hall was a private in the 2nd New York Regiment of the Continental Army during the Revolutionary War. At some point during the summer of 1783, he received this sheet of paper:

This was his discharge paperwork, furloughing him from the rapidly disbanding Continental Army. It was a DD-214 form for a simpler time. Issued on behalf of Gen. George Washington, it notes that Hall was “honored with the Badge of Merit for two years faithful service.”

The DD-214, the certificate of release from active duty, is something that every active duty service member receives when they retire or are discharged. In 1783, it was not much different.

That year, Hall along with other soldiers like fellow 2nd New York Regiment private Jeremiah McGowan — who had been serving since 1777 and who’s discharge paper can be seen here — were in camp around Newburgh, New York. The war had effectively ended in 1781 with the Siege of Yorktown, but it would take more than a year to negotiate a peace.

Throughout the war, the Continental Army had been plagued by a problem — paying the soldiers. In 1775 pay for a private in the Continental Army had been set at $6.67 per month. That rarely arrived on time, though, if it did at all. Soldiers were also paid in paper money. In December 1776, Washington had even been forced to offer his own personal fortune as payment to entice soldiers with expiring enlistments to stay on, as their paper scrip money was essentially useless. By 1781, $225 of this paper money was equivalent to $1 of hard currency. 1781 also saw two separate mutinies by units of the Continental Army, including one in which 1,500 Pennsylvania soldiers killed three officers and abandoned their camp in New Jersey. Initially planning to march to Philadelphia, they were eventually talked into reenlisting for a bonus.

By 1783, Congress wanted no part in a standing army that had plenty of muskets and wanted to be paid on time. In June, Washington ordered the Army to begin furloughing soldiers. Of course, Congress still didn’t have the money for all that back pay.

Instead, soldiers were discharged with one month’s pay, along with being allowed to keep their weapons, uniforms, and other issued equipment. The remainder was paid off with speculatory notes that could be redeemed at a later date, but were worth almost nothing at the time. Many soldiers ended up simply selling these notes.

While Washington’s Farewell Orders to the Army, before it was officially dissolved by Congress in Nov. 1783, said “the Officers and Soldiers may expect considerable assistance in recommencing their civil occupations from the sums due to them from the public, which must and will most inevitably be paid,” that was not always the case.

As for Pvt. Hall, when he passed away in 1817 or 1818, he had still never received a land grant that was promised at the beginning of his enlistment. Had he lived any longer, though, he would have needed his discharge papers to qualify for a Continental Army pension. Much like the DD-214s of today, this is one piece of government-issued paperwork you didn’t want to lose.