How Much Health Care Can You Buy For The Price Of An iPhone? This Much

Americans have “got to make a choice,” Republican Rep. Jason Chaffetz from Utah told CNN this morning, referring to his... 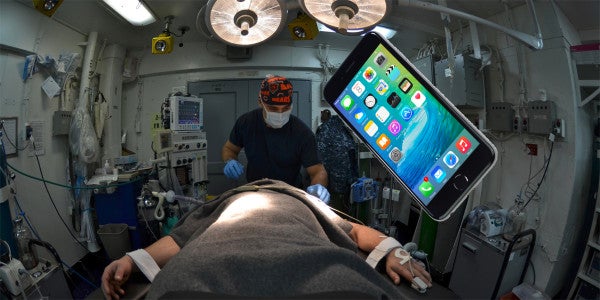 Americans have “got to make a choice,” Republican Rep. Jason Chaffetz from Utah told CNN this morning, referring to his party’s plan to repeal and replace Obamacare. “So rather than getting that new iPhone that they just love and want to go spend hundreds of dollars on that, maybe they should invest in their own health care.”

“Maybe rather than getting that new iPhone” Americans “should invest in their own healthcare” – Rep. Jason Chaffetz https://t.co/sxWaRohbEh pic.twitter.com/aEWYikdWiw

We sympathize with what Chaffetz was trying to say: Grown-ass adults have to make grown-ass decisions, including sometimes hard decisions about their financial priorities. And in America, in the 21st century, health care is a financial priority. So I thought I’d take Chaffetz at his word: What if I chose to buy an iPhone worth of health care? How much physical well-being would that buy me, anyway?

It’s easy. First, I took one top-of-the-line 256GB iPhone 7, retail cost $849. Then, I navigated over to Guroo.com, a site run by the nonprofit and nonpartisan Health Care Cost Institute, which worked with three of the U.S.’s biggest insurers to calculate average costs to insurers of common health procedures. Based on my location in South Florida and my insurance coverage (Florida Blue, bought on Healthcare.gov), here’s what I could afford instead of that fat smartphone:

Got a gamy appendix? Removing it — just removing it, not including hospital care or doctor’s visits — costs the average insured Floridian $17,984.

That’s based on an average cost of $482 for four office doctor visits to evaluate and manage symptoms.

Two-thirds of an allergy injection treatment.

Two specialist visits and the 16 required visits for injections to quell a major allergy can set you back an average of $1,307.

About one-fifth of a breast biopsy.

Just removing and analyzing a breast tissue sample can cost $3,709 — not including a mammogram or doctor’s visits.

8% of one problem-free vaginal childbirth.

Insurance pays $10,432 on average for an uneventful delivery.

About half a colonoscopy.

The procedure alone costs insurers an average of $1,786 if polyp removal is included.

One CAT scan of your head.

Expect that fancy imagery to cost $750 or so a pop.

Three visits with a diabetes specialist.

The average meeting with a diabetes doctor is billed to insurance at $266 per.

Another expensive image: $762, on average. But cheaper than the 10 to 20 grand that an ACL surgery can cost, on average, in Florida.

Four trips to an oncologist.

Expect to pay around $197 for each of your many trips to a cancer specialist just to say “hi.”

A single variable-strength radiation session runs $991 in Florida. And one is never enough.

Two and a half pregnancy ultrasounds.

Hey, at $343, showing your parents the new kid’s blip of a winky is practically a steal.