What Does The Term “Transition” Really Mean Anyway?

Transition. It's a funny word, especially when it comes to the military-to-civilian move that all of us must eventually make.... 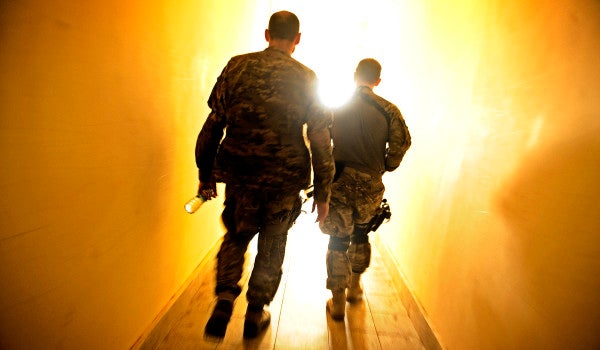 Transition. It's a funny word, especially when it comes to the military-to-civilian move that all of us must eventually make. What is transition, really? Is there some end state I should be looking for? Some point when I will know I am truly “adjusted” and am officially a member of “regular” society?

I'm starting to think that the answer to all of these questions, is a resounding “no.” Transition is Neverland, a mystical place where none of us who wore the uniform will ever see, because we had these periods of our life that just don’t relate.

But that’s okay, and here’s why: We still don’t have to figure it all out on our own, and can use this weird limbo period for all it’s worth, no matter how long it takes.

Cue the new game in town, Battle Buds, which pairs veterans with mentors who offer critical assistance within the domains of housing, medical, and employment resources, as well as basic peer-support training. This program, currently testing viability in New York City, is implementing a program to study the feasibility of helping newly discharged veterans transition back into their civilian communities.The goal is to determine if having a mentor for the first three-to-four months of civilian life makes an impact on a veteran’s ability to successfully readjust, find employment, and redefine success in his or her life.

Because transition starts the day we get our paperwork and ends possibly never. Take me, for example. I've been out nearly two years now. I have a job I created for myself, I am back in school, I am in a host of non-profit organizations to some capacity or another, and I have new and old friends watching my back as I take on too much. I am lucky to have an apartment in a good neighborhood and a local pub where everybody knows my name.

But have I really transitioned? I'm not sure. I've been a veteran since the day after my DD-214 said I was no longer a service member. I've been volunteering since before I left the service. I've had the same cat since before I went to the Military Entrance Processing Station and signed my life away. So what has changed? Where is that magical sign that says, “You'll be okay now: you've transitioned.”

The answer? There is no sign. Transition doesn’t have a finish line for most veterans; it's a state we get used to and a state in which we might stay for a long time, maybe forever. Fellow vets I talk to have been out for decades, and still feel as though they haven't fully transitioned back into the civilian realm. All it takes is one call from an old buddy and you're back to the same language, the same stories, the same feelings as though you separated yesterday.

But that doesn't have to be a bad thing. I'm learning that while I might feel as though I'm in transition for a long time, it doesn't have to be a negative word and there are great people starting nonprofits like Battle Buds to help. There are ways to keep things moving forward, to make progress every day, whether your transition is a few months, a few years, or a few decades. Hell, there are no official standards to measure when someone has fully transitioned, so we may as well make it easier for each other, right?

After all, help is the concept behind a lot of veterans organizations. Some do it better than others, as one who is a member of at least six organizations can attest. Some suck you in, surround you with those old feelings that you left behind, get you addicted to that comfort you feel when surrounded by veterans like you using words like “mission” and “objective” and “target” and they mean what you think they mean. We end up living in the past, thinking we are transitioning. These have their place; they provide us with comfort, a peer group, and a purpose. But they don't always push us forward.

Battle Buds, of which I am now a part of as a mentor and have great meetings with both veterans and civilians who can really vouch for the concept, does more than that. It gives new veterans a network.

As Army veteran and BattleBuds New York City Director Joe Quinn states, “When you transfer from post to post in the active duty military, you are given a sponsor and there's a gaining unit. We are trying to replicate this support where a Battle Buds mentor acts as the sponsor and Team RWB is the gaining unit.” It gives us resources. It gives us a chance in a new community and with a new life.

If you are a recently transitioned veteran living in the greater New York City area, take five minutes to find out more about the Battle Buds study. It could change your life.