Incarcerated Veterans Are Finding Relief In Meditation And Yoga

Editor's Note: This article was originally published in the spring 2014 edition of Student Open Access Research by Inferpoint. As... 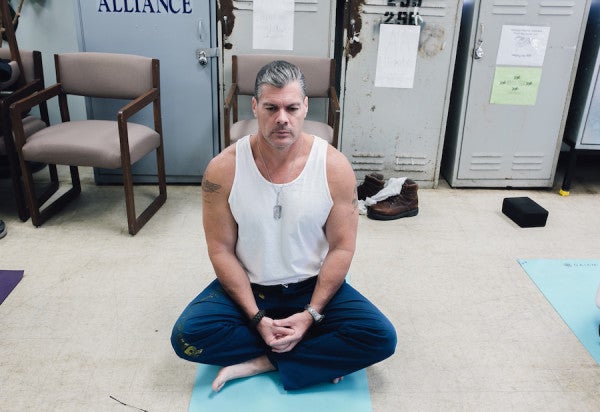 Editor's Note: This article was originally published in the spring 2014 edition of Student Open Access Research by Inferpoint.

As old as war

It's an age old story. Troops return home from fighting a war and struggle to readjust to civilian life. From the dreads of shell shock post-World War I, to the most recent afflictions of post-traumatic stress disorder among Operation Iraqi Freedom and Operation Enduring Freedom veterans, many return home and struggle to cope with their experiences. Still in this day and age, there are individuals unable to find relief from their haunted memories. Though a plethora of programs exist with the aim of mitigating this somber reality, not all are proven to be effective and even fewer are able to reach all those in need. Often this leads to aggressive behavior, acts of violence, arrests, and consequent incarceration. Many imprisoned veterans spend years behind bars in an environment ill-suited to address their unique problems. According to the Bureau of Justice, one in 10 inmates currently in state prison served in the U.S. armed forces. In addition, 50% of veterans in state facilities and 64% of service members in federal facilities served during a war time period.

Inmate Ron G. Self sits in the lotus position as he practices a breathing technique during a yoga session inside San Quentin State Prison in Marin, California, on Mar. 12, 2014.Haunted

For a decade now, American troops have been returning from Afghanistan and Iraq with both physical and mental trauma. In 2008, the RAND Corporation published a study entitled “The Invisible Wounds of War,” which stated that one-third of deployed troops were suffering from post-traumatic stress disorder, depression, or a traumatic brain injury. The National Institute of Mental Health completed the largest ever study of mental health risk amongst U.S. military personnel, finding a rise in veteran suicide deaths. According to the U.S. Department of Veterans Affairs, at least 22 U.S. veterans commit suicide every day across the United States. The post-traumatic stress disorder diagnosis was added to the Diagnostic and Statistical Manual of Mental Disorders in 1980 due to the high numbers of troops returning from Vietnam with severe and highly publicized mental problems. In the 1980s, the most comprehensive study of Vietnam veterans, the National Vietnam Veterans Readjustment Survey, found that 15% of all male combat veterans had post-traumatic stress disorder, and that of those, nearly half had been arrested at least once. It is easy to understand how veterans accounted for 20% of all state prisoners by 1986.

Reflective of the gap between combat zones, the number of veterans currently serving prison time has declined. Veterans more recently comprised approximately 10% of the statewide prison system, while they remained more likely than other prisoners to be convicted of a violent crime. The RAND survey attributes psychological damage and subsequent crime to several characteristics of the Iraq and Afghanistan wars. Given the current U.S. military structure, which depends on an all-voluntary force, many service members are required to endure multiple deployments without the benefit of having a larger force, which would allow for the work load to be more appropriately distributed. This leads to less down time between deployments, and higher compounded stress levels. The types of guerilla and insurgent warfare that these troops are required to perform in combat do not translate well to life back in the states, often leading to hostile and criminal behavior. Furthermore, many of those serving tours are Reserve and National Guard members who reside in rural areas that do not offer easy access to larger military installations where they may be able to receive the health care they require.

The stigma within the military to reach out for help is a major inhibitor for those that may otherwise consider seeking treatment. Although programs are introduced to them during post-deployment training, troops are looked down upon for utilizing them, and many rightly fear that doing so will negatively impact their careers. Even when an affected veteran is properly assessed, the military health system fails to keep up with the inundation of combat trauma-related needs. Suffering veterans may wait months to see a counselor and often turn to methods of self-medication that lead to alcohol and substance abuse. Consequently, 80% of soldiers accused of homicide have had documented alcohol or drug abuse problems.

An inmate and U.S military veteran performs child's pose during a yoga class provided by the Veterans Healing Veterans program at San Quentin State Prison. In a building near the prison yard, members of the program come together twice a week to participate in group therapy.Reverse warrior

A fortunate few veteran inmates have had the opportunity to participate in a program that addresses the special needs of veterans suffering from post-traumatic stress disorder, depression, and addiction. Concerned by the startling number of suicides among veterans, Ron G. Self, an inmate veteran himself, founded the Veterans Healing Veterans program in 2012. “I was interested in the psychological, emotional, and ethical issues of veterans related to their active duty in the military,” Self tells photographer Saalik Khan, a member of the Student Open Access Research photographic research team.

The program is offered at San Quentin State Prison in California and provides hope for those facing an otherwise daunting sentence. As part of the program, veterans participate in weekly group therapy discussions, or narrative therapy. According to Self, these “provide former soldiers and inmates with a safe environment that allows to deal with the past traumas that they have experienced in their lives, but also to help each other and other veterans on the outside of prison to come to terms with their PTSD and to help reduce the number of vets committing suicide and those that are coming into prison.” The U.S. Department of Veterans Affairs describes group therapy as a way to build relationships while confronting powerful emotions such as anger, rage, and, fear.

The program also offers restorative yoga and meditation sessions in conjunction with the Prison Yoga Project, founded by volunteer James Fox. Here inmates are able to alleviate symptoms that lead to reactive behaviors and stress-related disease. “A mindfulness practice is our tool for re-engaging prisoners with their bodies to restore the connection between mind, heart, and body,” Fox explains to Khan. “We use a trauma-informed practice to develop the whole person: to increase sensitivity toward oneself, and empathy for others.”

Khan earned access to observe the veterans program in an effort to, “share their experiences and give a face to individuals who would otherwise be reduced to a statistic.” In his observation time, Khan observed that, “during therapy those who spoke expressed regret about the mistakes they had made both while in service and after they had returned. There were accounts of not knowing what PTSD was or how addiction could in many ways be related to trauma.”

The program's success has led to numerous other prisons, including several in Texas, Colorado, and Maryland, adopting similar programs with the same positive results. In the hope of assisting new veterans returning from Iraq and Afghanistan, the group invites them to come inside the prison and share in the healing process. These older veterans wish to share their hard-earned and unprecedented tools of success with the next generation. San Quentin offers over 70 inmate programs centered on a community volunteer approach, which makes it a model for reform among California's 33 prisons. Making these programs available to veteran inmates in prisons nationwide would be a true show of commitment to those who have fought on their country's behalf.

The reality remains that a sobering number of incarcerated veterans nationwide are suffering from the psychological wounds of war. With rehabilitative treatments including yoga, meditation, and group therapy, inmates at San Quentin State Prison attempt to regain control of their lives and manage the effects of post-traumatic stress, depression, and addiction. Khan's collection of images shares the experiences of those men. “The men who once fought for their country now fight to become better men in prison through the Veterans Healing Veterans program, acknowledging that their struggle will continue on the outside where they will once again fight to find a place in society,” notes Khan.

Current prison statistics are due for an update. Given the recent success of programs like Veterans Healing Veterans, perhaps the next iteration of research will highlight the effectiveness of more holistic treatment programs. A future where the struggles facing veterans are proactively met with an empathetic process should be an imminent reality — not an idealistic aspiration.